Royal Navy and RAF personnel are putting the F-35B fifth-generation strike fighter through its paces in the Pacific.

Personnel from the Air Test and Evaluation Squadron left their base at Pax River in Maryland to embark in the amphibious assault ship USS America for the third phase of developmental testing of the F-35B.

We have 2 UK Lightning pilots in USS America as part of this trial. https://t.co/vG39l0aL5j

Also aboard USS America with the Salty Dogs of VX-23 are Marine Operational Test and Evaluation Squadron (VMX) 1 from Edwards Air Force Base, California and Marine Fighter Attack Squadron (VMFA) 211 from MCAS Yuma in Arizona.

The three-week long final phase of testing will evaluate the full range of the aircraft’s suitability and effectiveness on a sea-going carrier. The trial follows previous ones aboard the USS Wasp.

The nation’s new flagship HMS Queen Elizabeth is due to embark her first F-35Bs in 2018.

..or come up as “awaiting moderation”

Great – but I can’t help feeling that all UK aircraft design/construction has died on the back of the F35.

Surely the top vent opening could have fixed the issues with hot air intake for the harrier? Why has this not been developed alongside the F35 program in partnership with Boeing?

Applied to the 1950’s design of supersonic harrier this would be a world beater. 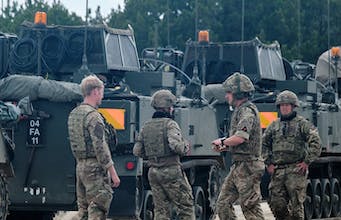