Strike teams from 40 Commando’s Bravo Company landed on the Dutch island of Texel before ‘taking out enemy positions’ and carrying out reconnaissance missions, but don’t worry it’s just an exercise.

The Royal Marines say they have completed preparations for operations across the Mediterranean this autumn after intensive amphibious exercises in the Netherlands.

“After three months of intensive work-up in the UK, marines from Plymouth-based 47 Commando headed to the Dutch island of Texel – scene of some of the final fighting in World War 2 – for the culmination of tough operational training. Around 90 commandos crossed the North Sea with Royal Navy support ship RFA Mounts Bay for training that has been developed over generations, building on a rich history of amphibious warfare. The ability to strike at enemy coastlines is fundamental to the Royal Marines and is why a deep knowledge and history of operating is carefully maintained and developed by raiding experts at 47 Commando.

Under the cover of darkness, on daring silent raids, under heavy fire, up craggy cliffs, complex fjords and across undulated beaches, those at the helm of landing and raiding craft have the daring and complicated task of getting fellow commandos ashore no matter the extreme. Training to qualify as a coxswain of such craft demands dedication and resolve: 42 weeks of training and assessment across three separate 14-week courses to reach the most advanced level. Most of the training is done around the waters near 47 Commando’s home in Plymouth, honing navigational skills, tactics and the handling of craft of all shapes and sizes – from the tiny Inshore Raiding Craft (IRC) and fast and armed Offshore Raiding Craft (ORC) to the larger Landing Craft Vehicle Personnel (LCVP) and Landing Craft Utility (LCU).

The course builds up to a final exercise – billed as ‘a driving test with a difference’ – which puts each student in unfamiliar surroundings with a testing mission to land commandos ashore. This year, the coxswains embarked in RFA Mounts Bay and sailed for Den Helder in the Netherlands to complete their final intensive exercise to become qualified, on what was aptly named Exercise Green Tulip.”

The Royal Navy say here that this was ideal preparation for operational deployments later this year as part of the Royal Navy’s Littoral Response Group (North), which focuses on the security and prosperity of European waters and is usually made up of amphibious flagship HMS Albion, a Bay-class (Mounts Bay or one of her sisters) and an escort frigate. 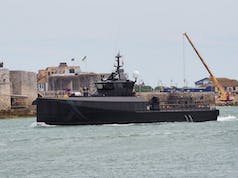 New experimental ship for the Royal Navy arrives in UK 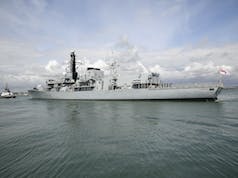 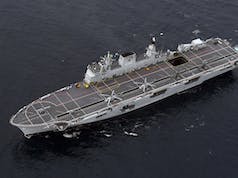 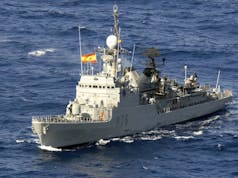 Navy Lookout reporting that it has been confirmed that Argus will be converted to a littoral support ship.

Ghee…. At 41 years of age, surely there would be better alternatives? Purchase a reasonably new container ship and convert must be a better long term prospect?

Be better, seem to remember Ocean was built on commercial lines and it saved a packet. Served for years and was considered one of the best assets we had.

Depends on your budget I suppose. No detail on what the modifications would be. I suppose the thinking is that since she will need a refit just to keep going ( as has been decided) as casualty evacuation role 3 beyond the 2030, there is an opportunity to do the conversion at the time of the refit and save some money compared to converting a Bay. And Argus is probably better suited in many ways.

What’s interesting is that MoD have again confirmed they’re looking at a MCM support vessel. That could potentially free up the Bay that’s been stuck playing mother to the MCMVs in the gulf. If Argus is going to be a LSS where will she go? The two LRG were to each have 1 Bay, with the UK based LRG also having an LPD. Argus thus increases the force now that Bay will be free to do amphib stuff now the MCM mother vessel is coming. LRG (S) with a Bay, plus Argus plus T31 is much better than a single… Read more »

I wonder if the thinking is that eventually LRG (south) will be a LHD, a LSD and a frigate, the converted Argus being a step in that direction.

Yes maybe! Each with 1 LPH and 1 Bay is the optimum I guess,as both the LPDs and the Bays lack aviation facilities. Which kind of shoots down the whole raiding/reaction concept unless their only using boats and LC! The LPH could also have drones.

Given that MRSS is supposed to replace the Albions, Bays, Argus, Ocean, and for all I know Diligence, eventually both LRGs will be two MRSS and a GP frigate.

The MRSS have some shoes to fill. I hope the spec will be flexible enough for a through deck configuration.

What I’m thinking is that MRSS is years away. Circumstances and budgets can change. Convert and refit Argus and you have a practical LPH, not ideal I’ll grant you, but combined with a Bay and a Type 31, and the right mix of helicopters by 2024/5 you have a very credible LRG. What can 2 MRSS do that a Bay and Argus LPH can’t?

You are right. The big worry is the MRSS will get pushed continually back. I don’t even know what the MRSS will be. I’m a fan of the Bays and if converting Argus means we won’t lose another Bay to a half assed capability, I think it’s a short term win. I also agree with Daniele, I’d like to have a couple of LPHs, but I’m not greedy. A couple of Mistrals will do. A Mistral, an Albion and a Bay, supported by a GP frigate, an ASW frigate, MCM, helicopters and drones, that would be my short term LRG,… Read more »

They were actually due to invade France, but have you seen the queues at Dover?

So that’s the French plan to prevent future invasions; don’t have enough Customs Officers on duty so any enemy force is held up in a queue? 🤷🏻‍♂️

Ah! I looked on Google news, as I do every morning. And an array of “top stories” from the Guardian, Independent, BBC.

Anyway, moving on from that obvious long term brainwashing the bottom line for them is it’s all Brexits fault.

Seem to seek out the EU viewpoint before all else.

Cunning, eh?
(Dover) did set me wondering if the ‘troops’ coming the other way, EU to UK, experienced the same delays transitting the border but could find no report on that myself. Was aware Port Authority said they’d planned to avoid just such over this weekend and were thus 😡

So it would seem Red channel ( to Declare ) Green channel (Nothing to declare,) White flag channel ( French ) or have I overstepped the mark

At least they got the right country this time , sometime ago exercising in Gibtaltar 42 hit the beaches of Spain instead of Catlan Bay always put your Chart in a waterproof plastic sleeve

Given they’d done the difficult bit, makes you wonder why they didn’t finish the job and continue north to take Madrid 😏

Could have if they’d had shorts and flip flops

The article correctly points out that Texel was the “scene of some of the final fighting in World War 2″. What it neglects to mention is that in those final days of the war, both sides doing the fighting were wearing German uniforms. And the fighting itself continued for some two weeks after the war had ended in Europe. The story of the Georgian uprising on Texel in April-May 1945 is one that I have researched for a number of years and while well known in the Netherlands and Georgia, it is pretty much off the radar in the English… Read more » 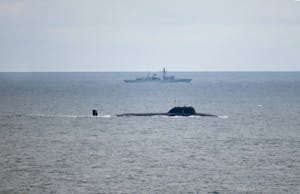 July 22, 2022
HMS Portland tracked two Russian submarines as they made their way south along the Norwegian coast from the Arctic.

Poland splashes out on Korean arms due to invasion of Ukraine