A Royal Air Force RC-135W intelligence gathering aircraft is currently circling close to the headquarters of the Russian Northern Fleet.

The aircraft, tail number ‘ZZ666’ and flying under ‘RRR7223’ was refuelled this morning in the North Sea by a U.S. Air Force KC-135 Refueller out of RAF Mildenhall before flying over Norway and then down to the Kola Peninsula, just off Murmansk.

That the Royal Air Force chose to make the aircraft visible on commercial tracking services like that shown above sends a very clear message. 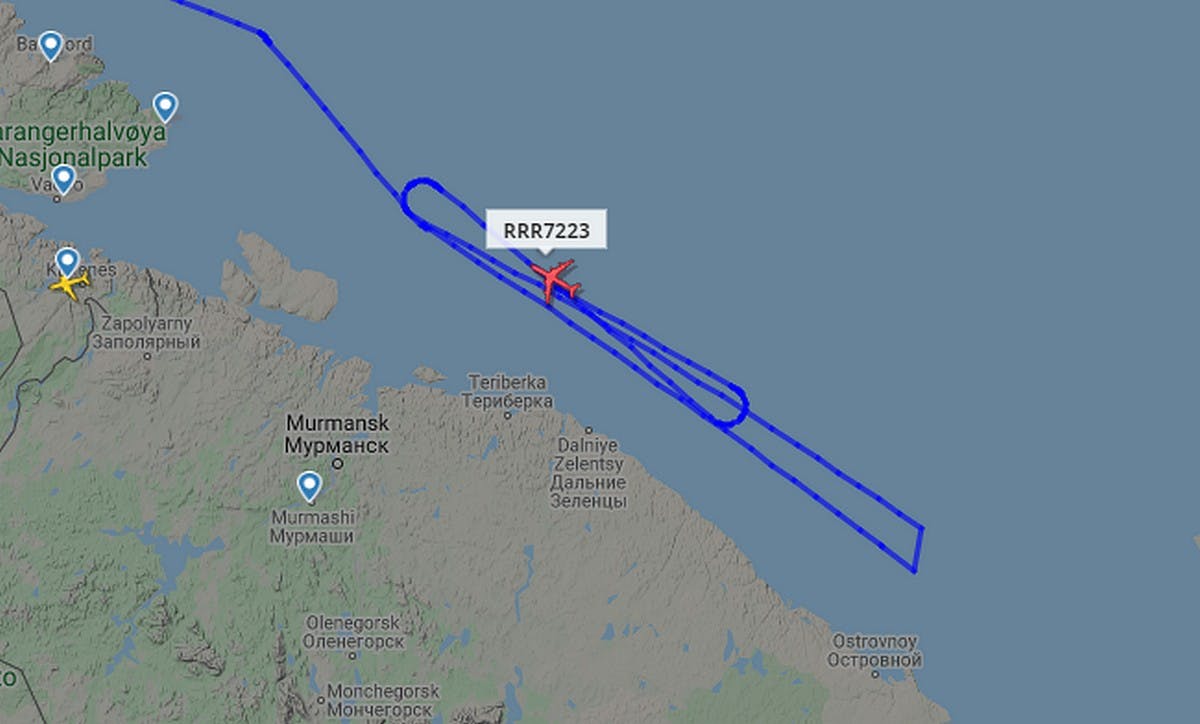 It should be noted, by the way, that the aircraft is in international airspace. 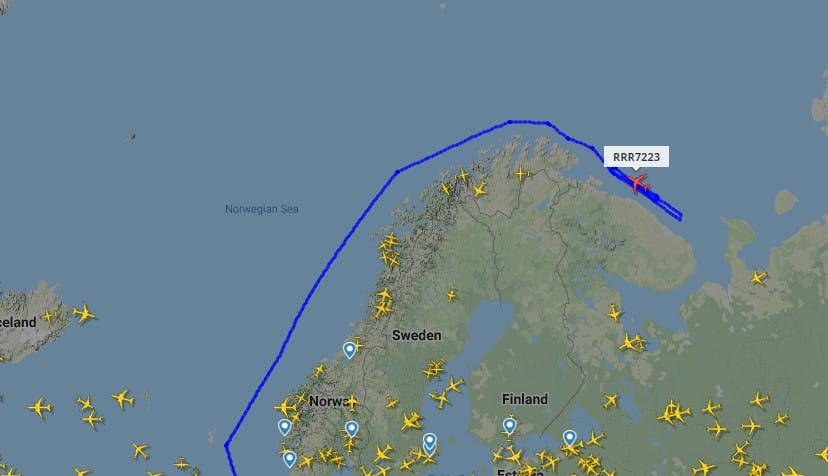 Why are we reporting this? Well, aside from the above, it’s important for people to see theat aircraft like this are in near-constant use rather than gathering dust in a hangar.

According to the Royal Air Force website, the RC-135W Rivet Joint is a dedicated ‘signals intelligence’ electronic surveillance aircraft that can be employed in all theatres on strategic and tactical missions. Its sensors ‘soak up’ electronic emissions from communications, radar and other systems.

I do hope we don’t offend comrade Putin ????

As the article says they do the same to us.

All a part of The Big Game of serving up warmed up Cold War leftovers.

We are probably, unsubtly, letting them know we are onto something they shouldn’t be doing.

There is an excellent book about it which details how on one occasion Canberra’s were asked to help the USAF… they did such a good job over Eastern Europe that they were asked to go again… The USAF General was told to foxtrot oscar given the first Warsaw Pact welcome.

Leaving their transponder on must be intentional.

That rather goes to my point.

We want them to know we are sitting there listening.

And they will know what we are sitting there listening to.

Bloke down the pub
Reply to  John Hampson

One of the gripes about Russian flights in the UK’s area of interest is that they put other aircraft at risk by not having their transponders on. It would’ve been a tad hypocritical to have done the same and this is an opportunity to show the Russians how it should be done.

John Clark
Reply to  Bloke down the pub

“Russian flights in the UK’s area of interest”

“British flights in the Russian areas of interest”

Support your own side.

Exactly, its not like the Russian’s wouldn’t have spotted it 100’s of miles out anyway. But flying without them does put commercial aircraft at risk especially over the UK which is a lot more congested than Siberia unless you plan on flying into Rudolph when he is out for the groceries.

It also serves to stop the sort of attrition that went on during the 60’s & 70’s where western AC frequently disappeared whilst “in international airspace” near the Soviet borders, and no one knew where they were,,, this way serves as a warning to Russia,,, everyone knows we are here,,,

Putin is just an annoying fly. It’s the Chicoms we should be worried about.

I know you trumpski supporters and Trump have a weird love relationship with Putin, but in the real world when you have a chemical attack by Putin on UK soil ,Putin tends to be a bit more than a annoying fly ,not to mention Russias massive hack on the US recently. Thats the real world trumptard.

I dont even know what that means lol.

Would be great to see the photos no doubt taken from the RC135 of the planes sent to intercept. Or from the Russian aircraft.

Surely the time has come for the RAF to request several Voyagers to be boom equipped? With the RC 135 and Poseidon aircraft in service there must be a demand…

Bloke down the pub
Reply to  Andrew

Agreed, the Voyager PPI scheme means they get paid every time an RAF aircraft is refuelled by someone else. With international air travel at a low because of covid, now would’ve been a good time to convert some tankers while the non-core fleet is readily available to take up the slack.

lee1
Reply to  Bloke down the pub

Feels like a response to the Cypriot GPS jamming attempts this week.

Should we be using tail number “ZZ666” – a lot of IGNORANT Americans will use this in a very bad way. Change it please to “ZZ777.”

Putin knows from past experience that Biden won’t do a thing if he invades another country like he did when he invaded Ukraine when Obama/Biden was in charge. And if America doesn’t life a finger that no body else will.

I doubt it and therein lies the possibility for a potentially catastrophic miscalculation for us all. NATO needs to be on the ball and make sure Putin knows exactly where the boundaries are. Peace will only be maintained if we are serious about consistently establishing those boundaries.

Neither, would of tRUMp!

Also note that last Sunday there was an RAF Rivet Joint (ZZ666) over the Black Sea on a Sunday aswell. I find these Sunday flights very intriguing.

We get that you don’t like Trump, who has not been in power for 2 months. Please stick to something related to defense.

The main issue with Ukraine was that it wasn’t in NATO so Article 5 did not apply. Would Putin have had his useful idiot proxies risk taking the Crimea if Article 5 was in the mix?
The Baltic states that are NATO members and on the frontline may get a lot of grey area aggravation but it is unlikely that a full on invasion would happen.
The NATO Article 5 response to 9/11 which was committed by non state attackers was an eyeopener for anyone wanting to cause mischief.

I believe they get more than you might know. Main signal box at Jelgava – receives traffic from NATO for onward forwarding, staff detailed and communicated all NATO train movements to the Russians. Small Russian teams circulating in Riga, for example, have you ever watched a Russian watching a Russian international ice hockey tournament, not shout, scream, drink a shed load? And then they walked out quietly – I did; all lean and fit and very well behaved and mannered. I was warned off by a Russian national – lean, very fit he had arrived in a Russian bar and… Read more »

Article 5 has to be activated by the state requesting help (Which is why it was not activated during the Falklands). If they infiltrate the Government and the government then do not activate the Article during an invasion then there is nothing NATO would do apart from shout about it politically.

Article 5 wasn’t activated in ’82 because it only applies north of the Tropic of Cancer. We couldn’t have invoked it if we wanted to.

Latvia needs to start expelling those pro Putin Russians, if it wants a European future!
It is up to Letvia to sort it’s own future out!

It was nothing to do with Biden or Obama. Russia and China know exactly how far they can push things without causing a conflict with the west. Russia knew that invading Crimea was going to draw criticism and sanctions but that no country would deem it a beg enough issue to start a war. Just like they keep moving the border with Georgia and no one does a thing about it. China knew they could take some small islands in the south china sea and that no one would risk a war over it. It is not about the politicians… Read more »

Well in a bygone time before the IOT it would probably have been shot down: https://www.washingtonpost.com/archive/politics/1992/06/14/50-us-airmen-downed-by-soviets-never-were-traced/708453bc-9ba3-4664-b80e-2e4c455b3a60/
There is an excellent book about it which details how on one occasion Canberra’s were asked to help the USAF… they did such a good job over Eastern Europe that they were asked to go again… The USAF General was told to foxtrot oscar given the first Warsaw Pact welcome.