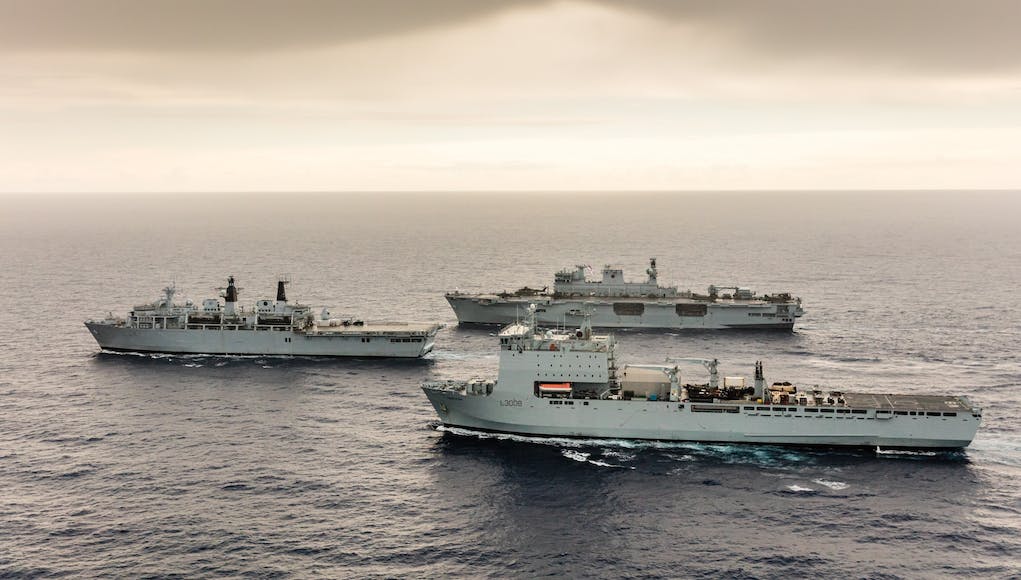 The Joint Expeditionary Force has sailed peacefully through the Suez Canal ready for operations and exercises in the Middle East.

The Task Group has already exercised with NATO allies in the Aegean, hosted a reception for Her Majesty’s Ambassador to Egypt and conducted an act of remembrance in Alexandria.

The government say the deployment proves the UK’s ability to deploy highly effective maritime forces anywhere in the world at short notice.

Now that the Task Group is safely through the Suez Canal, exercises with other navies including Gulf states in the Indian Ocean, will ensure the task group’s readiness for contingent operations, and provide opportunities to maintain relationships with partner nations.

“Now we have transited the Suez Canal my focus remains on demonstrating the Royal Navy’s ability to project a credible force into the Middle East and promote the UK’s interests there.

The Task Group remain ready to protect them wherever they might be challenged.”

The JEF is intended as a pool of high readiness, adaptable forces that is designed to enhance the UK’s ability to respond rapidly, anywhere in the world, with like-minded allies, or on behalf of international organisations such as the UN or NATO. The UK’s contribution will include the lead commando, airborne, armoured, aviation, air and maritime task groups.

“With the capability to ‘punch’ hard and not be a logistical or tactical drag on a coalition, we will be especially welcomed by our friends and feared by our enemies.

JEF will be capable of projecting power with global effect and influence. Nowhere is more important to us than our friends in the Middle East and Gulf and in line with clear political intent we would expect, with other initiatives, for JEF elements to spend more time reassuring and deterring in that region.”

Is the MV Eddystone Point a RFA vessel? IF it is why isn’t it refered to as such or is it another of these crazy civilian contracts?

Typical to see the RFA is yet again clearly ignored!!

I can’t understand how they can send a task force of this size, without some form of escort, even if it was just one frigate to provide some basic defensive abilities.

So basically any country in the world that has at least one fighter aircraft could sink our entire expeditionary force. Heck three stukas from ww2 could sink that fleet.

We’re ok protecting the USS enterprise with one of our world leading destroyers but not our very own task force in the region.

No need Steve. The government has a cunning plan! Ocean will be scrapped in ’18 with no replacement; Bulwark goes into extended readiness soon and as for the Bay class landing ship? I’m sure the Aussies would love another one on the cheap! – problem solved! See – no need for an escort! Seriously though, the perilous state of the RN is a national disgrace; threadbare and running on empty it’s a credit to the amazing men an women serving that we can do what we can with what we have. When will our government wake up and smell the… Read more »

I see that the Bay Class has one of the temporary hangars installed, visible between the cranes and the superstructure. Do all three of our Bay class have those temporary hangars now? If so I suppose I should stop calling them temporary, maybe call them “tenty” instead since they’re basically big tents although I’m sure they’re made of fancier materials. Doesn’t look as if there’s a helicopter embarked because, if there is, there’s an awful lot of clutter on deck between the hanger and the flight deck.

I’ve made the following comment on this site before and it wasn’t favoured. anyhow here goes As America’s closet ally, wouldn’t it be beneficial for both of us if they struck a similar military aid package as they do with Israel? I just find it staggering that given the might of the Israeli armed forces they can plead poverty and fear of conflict while producing a high level of tech and never having assisted the US in conflict the way the UK has. Israel will receive $30 Billion over the next ten years and most likely not see the type… Read more »

We are already pretty much another arm of the US military, i would rather not have another reason for them to hang over us if were to disagree with them over foreign policy, for example like we do with the falklands. Additionally let’s face it, if we got aid, we would cut our own expenditure and so would be a zero sum game.

I slightly disagree Steve, the context with the deal with the Israelis regards first dibs on tech after all they do make pretty awesome stuff. I can’t think of additional demands that the US would place on us tbh it’s in their interests to see a tier 1 partner and allly to grow. Our RAF are in Asia now, there’s no continent we are not involved in and that’s due to our alliance already with the US or through historical ties and how long can they carry us with the lack of capability? We need to rapidly double our surface… Read more »

If a country decided to launch an air attack on that “Task Group” what would defend against it???
A few Phalanx or Goalkeeper CIWS and some AA Guns.
Where are the 2 T23 and 1 T45 that should be covering high value assets like this?
I know numbers are at an all time low but surely the ships program should take this deployment into consideration.