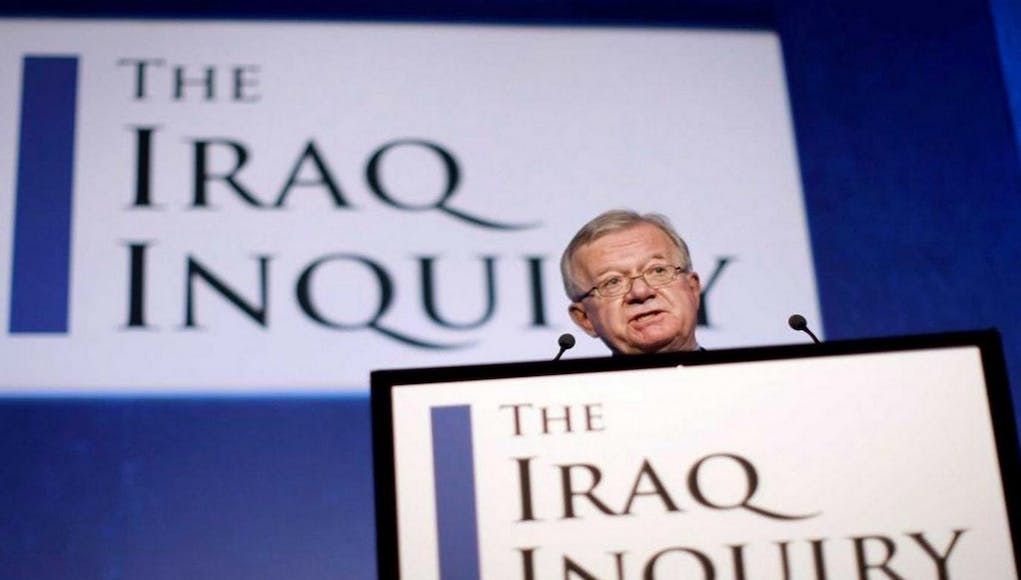 It has been reported that that the Chilcot report into the Iraq war could be used to prosecute British troops at The Hague.


It has been reported by many that that the Chilcot report into the Iraq war could be used to prosecute British troops at The Hague.

According to some newspapers, prosecutors at the International Criminal Court confirmed that they would examine the 2.6 million-word report for evidence of war crimes by British troops.

This is reported by the Times, Sun, Daily Mail and Daily Telegraph. Former Defence Minister Sir Gerald Howarth called for Britain to leave the ICC if troops are pursued in such a way.

Senior figures from Labour and the Scottish National party are meanwhile considering calls for legal action against Mr Blair if the former prime minister faces severe criticisms from the long-awaited inquiry into the war in Iraq, according to the Guardian.

It is understood however that the legality or illegality of the Iraq war was never a question Sir John Chilcot was asked to deal with in his inquiry.

“What Chilcot was asked to deal with was what happened, not only in the lead-up to the war but during the war and after the war, and what lessons can be learned from it. The legal issue wasn’t actually put to him. His review team wasn’t equipped properly to deal with that issue.”

The Iraq Inquiry, also referred to as the Chilcot Inquiry after its chairman, Sir John Chilcot, is a public inquiry into the nation’s role in the Iraq War. The inquiry was announced in 2009 by then Prime Minister Gordon Brown, with an initial announcement that proceedings would take place in private, a decision which was subsequently reversed after receiving criticism in the media and the House of Commons.

The inquiry covered the run-up to the conflict, the subsequent military action and its aftermath with the purpose to establish the way decisions were made, to determine what happened and to identify lessons to ensure that in a similar situation in future, the British government is equipped to respond in the most effective manner.

For doing there job, so wrong

FFS, why not tear down Nelsons Coloum. Prosecute Churchill family ?? We helped create Iraq after WW1, us & the allies broke up Kurdistan. Totally rediculess.

That’s a great big joke doing there jobs to save their lives and others.

Ridiculous they obeyed orders and thank you British Services for being the real backbone of this shattered nation.

I bet if they started at the top of the chain it would never happen. Blair needs to be sent down first.

If any service personnel have broken any law surely they should be prosecuted? Baffling comments.

Why not Blair?! he’s the one who sent them to Iraq and Afghanistan ..

That’s bollocks. So the troops get the blame but Blair and Bush walk away Scott free?

Complete bull shit!!
The men that sent them there should be on the chopping block

No way dont help other if do this to our troops

Ridiculous, to be prosecuted whilst the two idiot warmongers, Bush and Blair walk away unscathed as usual with no questions asked. Reminds me of 9/11 where three skyscrapers collapsed in freefall, two from an impact and the third from a fire.
Any student of Physics would confirm that this is impossible but good enough to send countries to war, for revenge!

Bloody disgusting. Send them to a pointless war to watch their friends get blown up by IED’s then lock them up. Should be ashamed of themselves

So Blair lied to the world to get his War and gets off scott free!! For all the blood on his hands he should be on trial for crimes against humanity!!!

If that happens the politicians that sent them need to be prosecuted as well. Our troops were doing there job. Been there done that