Troops from the Household Cavalry Regiment have just returned from a unique exercise in Gibraltar, say the British Army in a news release.

Exercise Daring Rock focused on Close Quarter Battle; operations in built-up areas and tunnel fighting tactics in the facilities the British Overseas Territory has to offer.

This was the Regiment’s first exercise in Gibraltar.

According to a British Army statement:

“The Regiment are not just responsible for public ceremonial duties for which they are famous, they’re also deployable, highly-trained soldiers. Troops have recently returned from the Regiment’s first exercise in Gibraltar, an opportunity to test, develop and enhance frontline skills in a new urban environment.

Exercise Daring Rock focused on Close Quarter Battle; operations in built-up areas and tunnel fighting tactics in the facilities the British Overseas Territory has to offer. Under the Future Soldier transformation plan, the Army will be more global in its perspective, its operations and its partnerships, with more overseas deployments like this one.

More of the Army will be deployed across the globe more of the time, with the capabilities to operate alongside partners, and compete with adversaries. We will be present in the places which matter most to the UK, meaning we can better anticipate events and reassure our allies.”

“The facilities they have here on the Rock, particularly the tunnel system, which I don’t think you can recreate in the UK, is really unique. So we’ve come here to practise our close quarter battle skills in tunnelled environments.”

Well I never….. We were just discussing that on another thread !

““The facilities they have here on the Rock, particularly the tunnel system, which I don’t think you can recreate in the UK, is really unique.”

Plenty of current and ex MoD “tunnels” exist in the UK, They should go down to Corsham for starters. 43 Cdo RM were there apparently a few months back.

I’m curious where that headline photo was taken on Gib? I thought Devils Tower Camp was by the runway on the border and that photo is defo not there.

Looks like the southern end higher up where the rifle range is? Anyone know the name of that area?

It’s up on Windmill Hill, one of the plateaux located on the southern end of Gibraltar. The photo was taken near the Edward VII battery, and you can just make out the former Lathbury Barracks in the background.

I’d already had a look on GE and found the location but didn’t know its name.

Yes, it’s suprising how many assets are tucked away in Gibraltar quietly. While a lot has been sold off (large sections my poor Navy base for a start!), we have held on to a lot.

In response to your opening post, yes, the Devil’s Tower camp is over by the airport. wedged between the sea and the North Front Cemetary. It will feel even more gramped now, what with the new road being built.

The Four Corners has seen investment too, with the addition of short stay accomodation for personnel.

Is Lathbury still used or not? I was at South Barracks back in the day, but that shut a while ago I believe

As far as I’m aware, it has been given over tot he sporting centre, although elements of the area are still in MOD hands, as Daniele noted.
Nice to see someone fromt he South Barracks! I believe they’re now used as a school

They must have spent some money to make it into a school, it was a dog hole when I was there! I wonder if the Wembley Bar is still open?

RM were at this ,now the Army are the Spanish coming after all there are always in our waters.🤔

What does it change if they are in Gib waters? It is just political nonsense and Gib is British today and will be British tomorrow.

The tunnel system is useful for exercises. The Gurkhas used it recently too.

Nothing new, I was there in 1989 doing the same thing! There is also a FIBUA village there, but you can’t see it in that pic.

Morning Daniele.. It’s good to see Gibraltar being used more for this type of Army exercise. I remember back when we had the 2015 Defence review, the government announced there would be more personnel based in Gibraltar, not sure if they ever did increase the numbers though. So it’s good to see this type of military activity there and of course the basing of a Batch 2 River class patrol ship. I remember going to Gib! with my Mum and Dad for a visit, really enjoyed touring around the territory. Interesting place.

Have a good day all!

Likewise, I was only 12 at the time mind! There were several Leander Frigates anchored in port and I also remember a det of 3 Nimrods.
I’d like to go back and have a deeper nosey knowing what I do now of the installations.
No idea of extra personnel. For me it is the facilities that are key to the place.

As you can see here.

During the time that UK Battle Groups where deployed to Afgan the tunnels where in extensive use During a refuel stop and after a quick rock race, We did a tunnel tour (one of many I have done over the years) with one of the Gib Reg SNCOs. He explained that NVGs are useless without ambient light and that you need an additional light source but that highlights your position to the enemy if they have has NVGs. Thermal sights are ok but things like booby traps are hard to see as everything except for people tends to come down… Read more »

I thought SUSAT’s were long withdrawn…

Did several ex on and in Gib about 10 years ago. Awesome experience. Once in they turn off the lights so its artificial only. You can head well off the main tunnel tours in the fighting and can spend several days going up and down the rock, whilst the map is fiendishly (still have it somewhere) but even that misses some of the small passeges. During the intense parts of the fighting, I navigated off muzzle flash! Increasing lengths were being made OOB due to degradation however, as much for the contents as the structure. It was the upper rock… Read more »

Plenty of OOB areas. Especially the old power plant caverns. They are Asbestos city! I have some pics from there in the mid 80s where we were climbing all over the engines. Nowadays big no no…you shouldn’t even go in there due to the hazards.

The tours we got went well off the beaten track and I know what you mean about small unmapped passages …the Gib Reg Guides are pretty much the only people who know what goes where and its all in their heads! 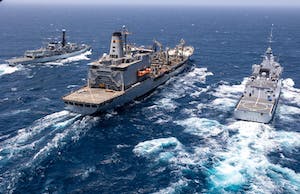