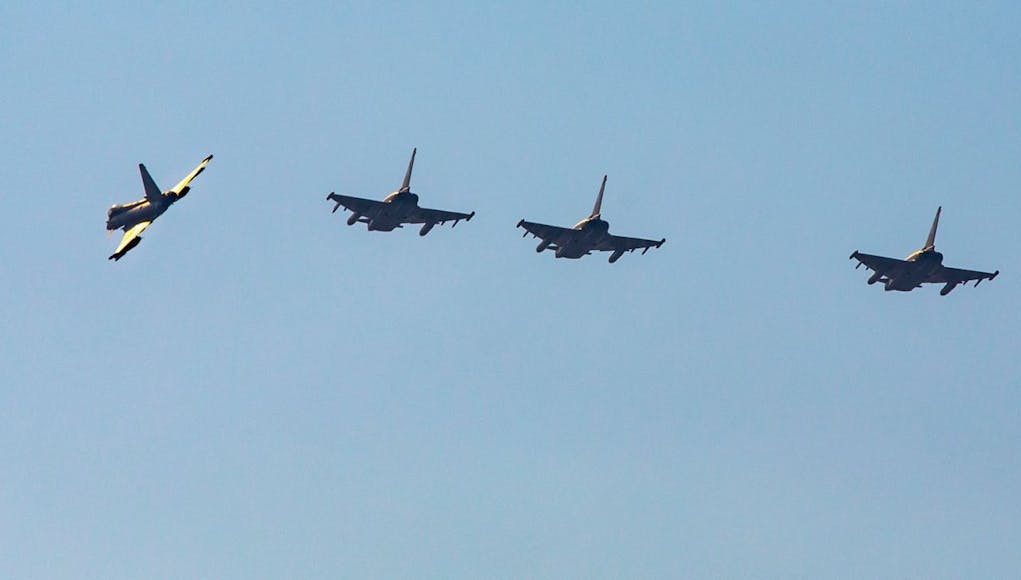 Four Typhoons from XI(F) Squadron have arrived at Ämari Airbase in Estonia to begin their four-month NATO mission to protect NATO Baltic airspace.

The British jets will be at readiness to scramble if required to protect NATO airspace say the RAF, replacing the German Typhoons who have been carrying out the duty for the last few months.

“As part of its assurance measures NATO has committed to protect Estonian airspace and the UK as a fully committed NATO partner regularly undertakes a turn of this duty.”

“Aircraft can be launched in a very short space of time; the role we are carrying out is identical to that performed by Typhoons back in the UK from their Coningsby or Lossiemouth bases.”

Flying in support of NATO Air Policing missions is a regular duty for RAF Typhoon sqns who last operated from Estonia in 2016.

I wonder why they decided to apply those decals

Maybe if they were in just UK markings the Russians could say they had no jurisdiction in that area, and they are also part of the NATO mission.

Possibly, but how many NATO missions have there been since the alliance was founded. Perhaps its to reenergize some solidarity in challenging times politically

NATO countries should donate a small fleet of F16s to the Baltic members so they can start patrolling their own skies. They could come from the US stockpiles in our reserve fleets or from countries like Denmark, Norway and the Netherlands who won’t be needing their F16s as the F35 becomes operational. We can still support with maintenance crew rotations and F16 will still be adequate for the role.

I agree but the cost involved puts it outa their hands… the facility’s,crew, training, spare parts. Can’t expect them to get it all for free.

Sounds like a valid justification to apportion some of the foreign aid budget to these countries to support the lifing costs of operating the aircraft. Who know there could even be some quid pro quo with contracts coming our way.

Typhoon to remain at forefront of combat air capability in Europe...