Exercise Atlantic Trident has kicked off with jets from France, the UK and the US flying from from Air Base 118 in Mont-de-Marsan.

The exercise, organised by the French Air Force, is taking place over Western Europe.

NATO say here that this combined air force training is the meeting hub for three Allied air forces enabling them to practice the “high-spectrum” missions of air combat, for today and tomorrow.

“Over the next two weeks, the United States Air Force, the British Royal Air Force and the French Air and Space Force will hone their skills to operate together and to increase interoperability as well as technical and tactical know-how. More than 600 women and men from the three air forces will be ready to accept the operational challenge of this exercise.

Almost fifty latest-generation combat aircraft such as the French Rafale, the British Typhoon or the American F-35 will simulate combined raids in the French airspace. Their objective: to promote the development of common procedures, reflecting the high intensity of air combat.”

Captain Jonathan Farrow OBE, based in France as a liaison officer, was quoted as saying:

“Atlantic Trident will notably be the first international [hosted] exercise in which the new aircraft carrier HMS  Queen Elizabeth will be deployed.”

NATO add in a news release:

“The trilateral exercise’s focus will be on the constant modernization of the three air forces, innovation and technological performance to better enable them to protect the integrity of an area or a territory. With the crews, the know-how of specialists – mechanics, controllers, communication systems experts, logisticians and many others – will be mobilized.”

Lots going on these days. Can you imagine the headlines if the exercises were held over the Channel Islands

Should have used the f35b, they could have fitted more duty free into the empty bomb bays and landed in the shops car parks easier.

It’s getting pretty serious now, first Scotland then the Carriers come under attack and now We’re bombing France…. whatever next ?﻿😱﻿

Rafale up against Typhoons I wonder 🤔

I suspect the answer is it doesn’t matter anymore. What matters is which has the longer ranged missiles and/or best defensive suite. I doubt the base platform really matters

Great to see all these mini Red Flags taking place and the integration of forces.

The British armed forces are having a ball, the RN and CSG playing of Scotland, the RAF playing in France,the RM playing of Scotland then the Baltic, and the Army is out in all parts of the world doing their stuff. We do seem to be uping the readiness of our armed forces. Now if we could just get the numbers to match the quality of men and women then we would be on to something. Wonder what nasty games the subs are playing?

Any idea what RAF squadrons are involved?

Your Bang on about numbers Ron 👍

Still waiting to hear what de-escalated the Donbas recently. Presume Osint Bunker’ll have an opinion, but how close to the mark?

It was another successful mission for 007……..

My understanding is the Russians suprisingly Blinked First and withdrew,but have left substantial amounts of pre-positioned Equipment.

Reportedly they had major sustainment issues, they didnt have the logistics capacity to keep that many soldiers fed and watered in the area. The reservoirs of the Crimean water network were running dry and they would have needed to start shipping in drinking water if they were there any longer. 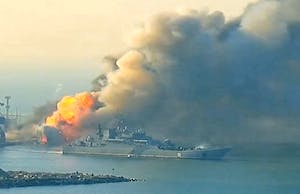