Typhoon fighter jets have exercised with visiting US B-52 bombers, say the Royal Air Force.

The British aircraft carried out a practice intercept, giving both the RAF and USAF aircrew the opportunity to exercise with each other.

“We have a longstanding and rewarding partnership with the United States Air Force having worked successfully together on operations and exercises and as part of NATO.  That success is built on mutual respect and cooperation. The RAF is involved in operations with partners around the world and our commitment to the NATO alliance remains as steadfast as ever.”

The RAF advise that this training exercise with the B-52 is the latest in a series of air integration training opportunities that have seen RAF and USAF aircraft operating together training to fly missions in a hostile air environment and marks a shift away from the counter-insurgency operations that have been conducted in recent years.

“The Typhoons from RAF Coningsby carry out a range of duties including Quick Reaction Alert interceptions of foreign or suspicious aircraft entering UK airspace. The aircraft have also recently returned from Estonia where they conducted the NATO Baltic Air Policing mission.

Baltic Air Policing is a peacetime collective defence mission that safeguards the integrity of NATO Alliance members’ airspace. It is the visible augmentation of our Eastern allies’ airpower capability and highlights the UK’s commitment to NATO’s capability, vigilance and interoperability.

The Typhoon Force is also committed to operations in the Middle East, deployed to the Falklands and will soon be conducting Air Policing tasks from Iceland; the RAF’s first operational deployment to Iceland since the Second World War.”

A great pity that we never invested in a squadron or two of these. These would be a prime asset for delivering standoff munitions in large quantities over a considerable distance.

If you had a real operational requirement to do that you could do it with stand-off precision attack weaponry dispensed from C-17s or A400Ms. Several studies have been conducted to this end but never taken any further

With up to 20 AGM-86A air-launched cruise missiles or other standoff missiles of similar size including anti-ship, these would make one hell of a deterrent.

Nice to have but probably not needed, as Richard has stated, freefall bombing has gone and a modern and multi role airframe could do the stand off precision attack role. Lovely looking aircraft though, and had control of a few of them for a few hours at a time on Herrick. The power of greyskull!!!!!

Not strictly true. In a peer vs peer conflict for sure. Witnessed a B52 high level strike in both Iraq and Afghan, glad I wasn’t under it! The last one was where 6 B52s dropped over forty JDAMs each down near Bahram Char in southern Afghan, definitely a case of shock and awe. Where you have a benign anti-air environment a free fall bomb strike can be very effective. In another post I’ve mentioned France are using their Atlantic 2s in a similar role in Mali and SW Chad. Because the aircraft has the capability of a un-refuelled duration of… Read more »

Maybe I wasnt clear in regard to the bombing, I mean freefall dumb bombing, like the russkies have been doing in Syria, no longer effective or political agreeable. Waste of ordnance and not effective. And can seriously piss off any locals you want to be friends with. As a JDAM truck the B52 is awesome, shit loads of LGBs, paveways etc, a godsend when it’s on station for 4 hours above you, as I’m sure you have experienced. But a stand off airframe to launch strikes, pretty much any modern military transport can be utilised to do that. However, the… Read more »

Airborne’s last sentence is why it’s a godsend we never purchased any B52s, realistically given what we have witnessed in the last 20 years from spending position, would we have kept them to a modern enough model to actually be a credible force. Over than that amazing bomb Bay with wings, incredible watching them do an angled landing crabbing along the runway.

The USA built 744 B52s, so there happens to be a few left which they spend a fortune on maintaining. Its far fetched to think we could keep a few ourselves.

They did build 744 but only 58 remain active. So by that reckoning if we had brought 75 in 1960 we’d have 5 in service and that’s if we could match the maintenance spend of the best funded military in the world

Yes Indeed, but of that 58 not all are available. Many are being upgraded. So our 5 would barely be if any use. And where we going to spend a fortune on foreign currency on B52s when we had our own V Bombers? It’s fanciful to think it would be sensible to buy 75 B52s on top of our own V Bombers. The French built the Mirage IV to carry their A Bombs. Neither we not they needed huge bombers like the B52. The harsh reality is that both us and the French are constrained by a budget.

The Big Man
Reply to  LongTime

Most were cut up under the terms of nuclear proliferation treaty, not sure which one SALT possibly.

We were forced to drop our strategic bomber fleet when we signed up for polaris and those that followed, we no longer required to deliver such by air attack alone. Test shown that time taken for mission time on target the typhoon beats what we had anyway and that of the B52. What in the 1980s took a massive fleet of V class bombers and converted tankers and a huge commitment of nearly 1000 ground crew and support, can now be flown and completed by 2 typhoons in a fraction of the time cost and commitment. Just prior to 1012… Read more »

I wonder if this is the B-52 that had a piece of the outrigger landing gear door fall into a woman’s yard in the UK?

Mmmm….personally if you went for this type of thing I’d prdfer the old Vulcans. Maybe not quite the range ad payload of the B-52’s but quicker reaction and can fly out of much shorter runways. And oh so beautiful…..watch the difference!

Not to mention the Vulcan howl..!

It’s a pity the Vulcans couldn’t be kept going for another 5 years. The US had developed the air launched cruise missile agm-86. This was to be carried by the B52 and the then new B1. This was a game changer for large bombers as they could now launch an attack safely away from air defenses. The agm-86 set the scene for precision stand-off air launched weapons. It’s a shame that the MoD at the time didn’t have the vision to look at the Vulcan as a future platform for stand-off weapons.

The Vulcan, never has an aircraft looked or sounded so sexy and mean at the sane time! 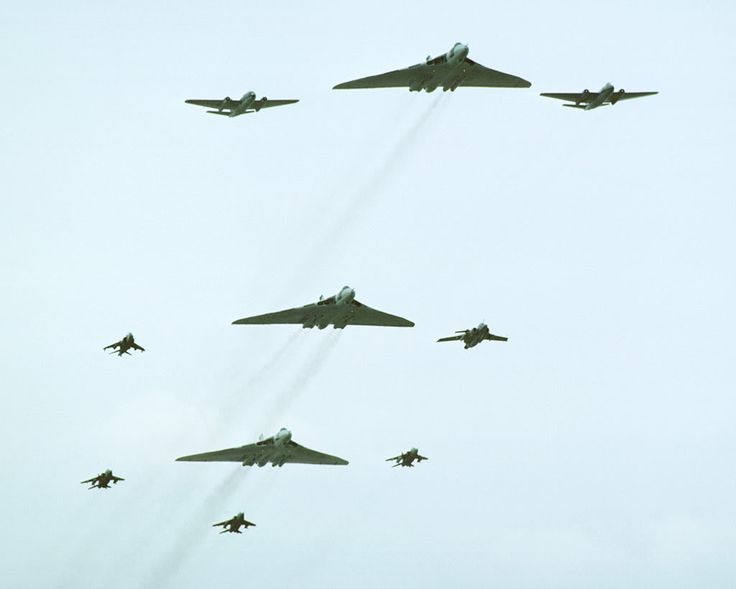 Canberra and buccaneer with Jags as well, and sea harrier? You have spoilt us all Helions mate!

It did a fantastic job of setting off car alarms at air shows too!