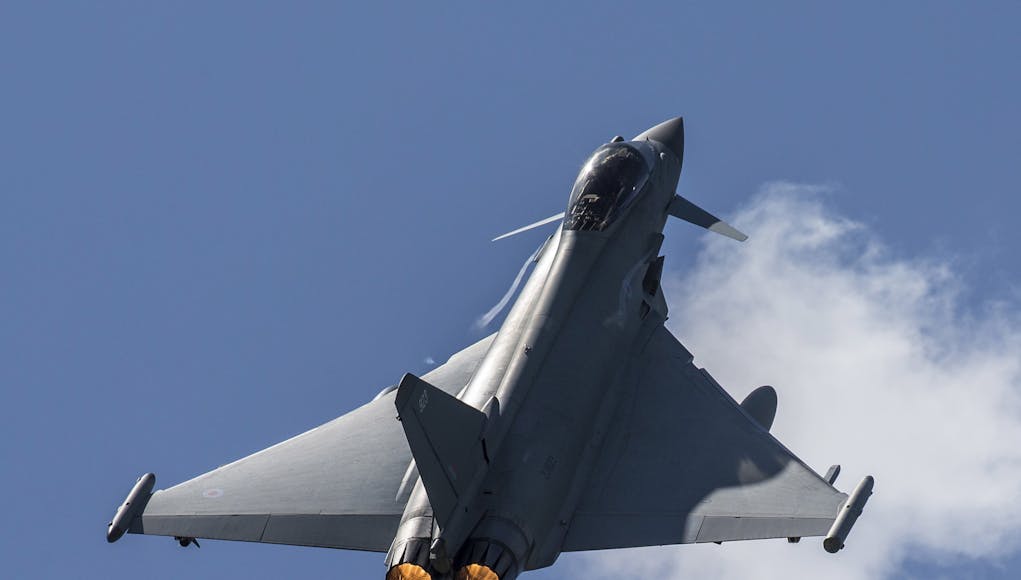 Typhoons based in Romania has been launched in response to Russian Su-24 FENCER aircraft operating near NATO airspace over the Black Sea.

Operating from the Romanian Mihail Kogălniceanu Air Base near Constanta on the Black Sea coast, the Typhoons responded to the suspected bomber aircraft heading west towards NATO airspace say the MoD.

The Russian aircraft was flying over the western Black Sea and were monitored by two Typhoon pilots from 135 Expeditionary Air Wing (EAW), in accordance with the NATO Enhanced Air Policing (eAP) mission the RAF is conducting in Romania.

A Typhoon pilot from 1 (Fighter) Squadron, attached to 135 EAW, was sitting on Quick Reaction Alert duty when the scramble was called. He said:

“When we received the message to scramble, we sprinted to the jets with our engineers, fired up the aircraft and took off all within a matter of minutes. We were then vectored toward the unknown Russian aircraft who were close to infringing NATO airspace.

The Russian aircraft did not enter NATO airspace so we were ordered to patrol the skies for a short period of time as a deterrent, until finally returning to MK Air Base. We routinely conduct air policing in the UK so today’s event is familiar and went seamlessly.”

The RAF mission in Romania is part of NATO’s Assurance Measures introduced in 2014.  At the time, the Alliance started implementing these Assurance Measures with the goal of demonstrating the collective resolve of Allies and the defensive nature of NATO.

The RAF is deployed to Romania as part of the NATO ‘Enhanced Air Policing’ mission, where member states will provide assistance to the Romanian Air Force’s own fleet of fast-jet aircraft. Romania is equipped with MiG -21 Lancer and the American built F-16 aircraft.

Always happy to support our European trading partners before and after Brexit!

We need more Typhoon squadrons. Sell off the Tranche 1 and replace with Tranche 3. 2035 is a very long way off given the current threat levels to the UK and Europe.

And where are we going to find the ~£80mn per new Tranche 3? There are a huge number of cash strapped projects that could do with more units instead of buying more Typhoons: Type 31, the Poseidon MPAs, Apache gunships, helicopters in general actually. As it stands, the RAF’s fighter squadrons are probably the best equipped part of the armed forces due to constant QRA watch and the recent air-only campaigns in the Middle East making them highly visible and important assets. For the record, I’m not knocking the Typhoon or the priority fighter aircraft have been given in recent… Read more »

We have the money in abundance Callum, HMG just needs convincing that making such an investment will protect the UK and quite possibly help in the Brexit negotiations. Only a complete fool would make an enemy of a Country able and willing to protect them. Just look at the state of the German armed forces at the moment and we are offering £40 Billion in a divorce settlement? I’m sure D. Trumps approach would be the same as mine, hold onto it including part of the foreign aid budget and spend it on defence. Negotiate from a position power not… Read more »

The £40 bn is not a donation it is part of a legal requirement as we signed a commitment to pay that money in the first place. Not paying it would put us in breach of the rules and that is not a good way of keeping friends. Holding ourselves to trumps standards is not a good idea. That buffoon is harming the US like never before.

We are better negotiating internationally from a position of trust, not from the perspective of a moronic school bully.

Yes we could refuse to pay. There are no world police to come and get us if we do not. However it would not be a good idea as many relationships are built on trust and so if we want others to trust us then we need to be seen to be abiding by the rules. It also gives us the moral high ground which is always a good place to be firing arrows from.

We would all like that but it isn’t going to happen and neither will the scrapped tornados be replaced on a squadron for squadron basis. Another 5 years to get ONE more F35 squadron on the front line? Big deal!!
We have the trained pilots now! No wonder we find it hard to retain these highly trained people.

If Britain pays one penny to the EU as a so called divorce bill it will be the greatest betrayal of British people in modern history.

There is no such place as NATO airspace. There is Romanian airspace and Russia is closer to it in their own neighbourhood than the British.

How many of those nations listed are currently involved in current operations/air policing? perhaps there is the answer

How many of those nations see themselves as a global power?

By definition if a nation doesn’t have a presence in the Pacific it is not a global power.

Or maybe the definition should be if a nation has the capability to deploy and operate land, air and naval forces combined over a prolonged period to the other side of the world.

The UK despite its continuing shrinkage of assets is capable of that.

Most other nations are not.

Even sending a handful of Astute would keep most nations navies in port, which is why I so wish for more of these over just about anything else.

simply put .nato needs to beat down Russia.[ thats a period] then take half the money wasted and look to the heavens for expantion .