A detachment of four Typhoon fighter jets from the RAF’s 3 Fighter Squadron is currently working alongside the Romanian Air Force to police the skies over the Black Sea.

A detachment of four Typhoon fighter jets from the UK RAF’s 3 Fighter Squadron is currently working alongside the Romanian Air Force to police the skies over the Black Sea.

Deployed for four months, the aircraft have been based in Mihail Kogalniceanu Airbase in south east Romania since May.

This Southern Air Policing mission is the first time that NATO has deployed aircraft to the Black Sea region, with the UK being the first country on the rotation.

“The Typhoon’s outstanding performance and proven track record in air policing has been very well received on NATO’s southern flank. Our work there in reassuring our NATO allies and deterring any aggression is absolutely clear.

We have been working hand in glove with the Romanian Air Force, sharing ideas and workload. They have seen how we undertake our air policing and our air defence mission and they are learning from that.”

The UK has built up a wealth of experience supporting NATO air policing missions where the tempo of activity tends to be relatively demanding.

“For the last three years we have deployed for a four-month period in support of NATO air policing missions and previously we have been based in both Lithuania and Estonia, supporting the Baltic States.

Typhoon is very adept in its capability and is combat proven in its air policing mission which is why we have been very well received by our hosts and the NATO allies in the region.”

This latest detachment comprises four Typhoon aircraft from No. 3 (Fighter) Squadron from RAF Coningsby in Lincolnshire and is supported by around 150 personnel drawn from stations across the UK. 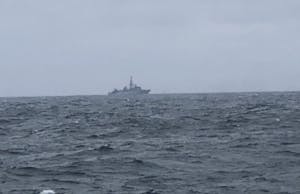 May 18, 2021
The RFS Yuriy Ivanov has been photographed closely monitoring HMS Queen Elizabeth and her Carrier Strike Group off the Scottish coast.