Home Sea British warships in show of force in Gulf 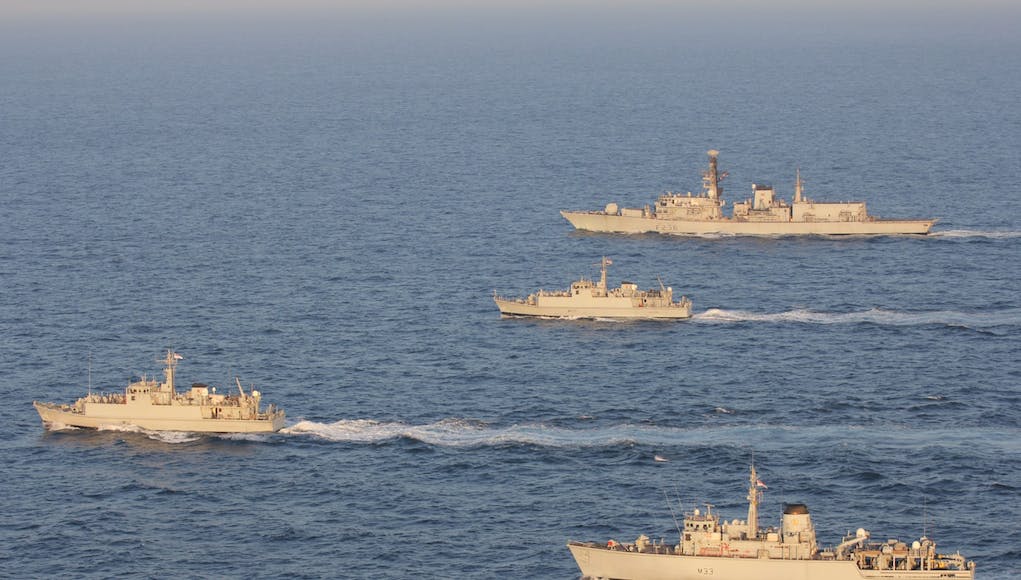 What are freedom of navigation operations?

What is the British presence in the region for?

In 2019, our reporter Henry Jones spent a week in the Middle East, including two days onboard RFA Cardigan Bay in the Persian Gulf.

As well as a visit to HMS Montrose and HMS Shoreham, he reported on the continued British presence in an increasingly volatile region.

“We provide confidence for the world markets to continue to supply their trade”, adding, with a cheery smile, “For us, it’s normal business.”

You can read more about the British presence by visiting the link above.

Good to see. I’m sure I read somewhere that the mine hunting ships were to be replaced with crewless versions in the future, if that is to pass I can’t quite see the above demonstration being able to carry the same amount of weight. But I appreciate it does depend on how they do the mine hunting ships. If going crewless resulted in more hulls combined with larger crewed mother ships, it may be even better than now.

My guess is that the Type 32 Frigate recently mentioned will be a mothership type vessel and will replace the current Minehunters. The Type 26 and Type 31s have mission bays as well so perhaps they too can operate as motherships if needed.

This should enable the proper use of the new Autonomous Mine Hunting Vessels that were recently announced – am also assuming a follow on order for more of those.

Perhaps they’ll also use Unmanned Subs as well as part of their ASW suite too? RN is looking into both, so it would be logical.

Good Morning John. I think it will be a long time before crewless ships will be capable of performing all the tasks currently undertaken by manned naval vessels. The trend in recent years is for a broad range of ships to perform a wider range of tasks as for example RFA supplyships,MCM’s and Survey vessels such as Echo in multiple roles in the Caribbean and Middle East. This kind of flexibility needs on site human input that cannot be undertaken by unmanned hulls. Such ships cannot for example chase down pirates or intercept drug runners or assist in Hurricane aftermaths.

Yes…and No. The minehunting can be done by remote vessels, controlled from a mothership or from shore. However the data still needs analysing so you need Muppets to do the same job as they do now. You will still need Clearance Divers and all the gear that they have( Boats, Rebreather sets, Decompression Chambers, Demo Charges etc) To add to that you need to send a mothership into an area where you don’t know the extent of a minefield. Sending a steel hull 7000t Frigate is not such a great idea to find the extent of a field made up… Read more »

Really interesting replies. Cheers everyone. Hopefully those responsible won’t use the allure of crew less ships as a smoke screen to make cuts to personnel or capabilities. I really hope it will be used as a force multiplier.

Those mine counter measure ships must cost a clean fortune in crew salaries if they are paying out a Captains wage plus several senior officers.

Crewless ships is definitely the way to go but would need a larger number of T32 with modular pay loads to perform the task.

Containerization is definitely the way to go in the future, from UAVs, unmanned submersibles, mine counter measures, containerized hospitals even TLAMS, ASM and SAMS can be containerized and elevated 90 degrees when needed.

The CO on an MCMV is a Lt CDR. Most Officers are LT or Sub Tt. They carry one Warrant Officer, Senior rates and junior rates.
Montrose CO is a Commander. They also have LtCDRs as department heads, Lt and Sub Lt onboard. 3 x Warrant Officers, Senior and Junior rates.

Not sure how much force is shown with 1 frigate and a few mine hunters. Better than nothing I guess.

My thoughts exactly, especially since we are fitted for but not with on most armaments. A fully gunned out frigate would be a lot more impressive to see

And how do you know what’s on Montrose or the MCMVs? Have you been on them recently?
I have been On all of them a large number of times including twice this week for a Sandown and the T23.

All are FULLY tooled up and bombed up. No fitted for but not with. They are in a high threat area so they get all the kit and a few extra special fits unique to the area.

Could you comment on these ‘extra special fits’ at all?

Err No because I am still under the OSA …they are sneaky stuff most of which is identified by 3 letter code groups or Codeword names.

Just wait til China starts doing freedom of navigation expeditions of their own. Probably have 20-30 frigates and destroyers sailing together as one group.
[email protected]

Hey Matt, I agree the Chinese have an impressive outlay of surface ships and subs available that makes the RN – and most others to be frank – look impotent. My question is how good is the Chinese navy in terms of both equipment and crew training? Somehow, I don’t see their ships having been built to the same survivability standards as ours, nor their crews trained to the world class standard of the RN. In a real shooting war, might the superior quality and training of the RN/US/Japanese navies negate the Chinese vastly superior numbers? Just playing the ‘arm-chair… Read more »

For decades the issue is the RN and the USN didn’t perceive a surface threat, and have under invested in offensive capabilities. The USN is now fixing that fast, but the RN is still left with harphoon, an obsolete missile aystem and very low numbers of launchers at that. If Chinese missiles are even vaguely effective, they would quickly out match the RN and even the f35b don’t have any anti ship missiles currently. USN is more complex as they have better numbers and fleets that work together and so harder to overwealm. Combined Japan/RN/USN would have pretty decent numbers… Read more »

Thank you Steve – some great points there. If we (US/RN/Japan) would struggle vs the Chinese on the surface, might a better approach be to unleash our combined attack boat strength to first eliminate the Chinese sub-surface threat then go after their surface fleet? From what I have read, their boats are quiet noisy and I doubt their sub-hunting skills are on par with ours. Our boats are some of the finest out there and again our crew training you would have to think is much, much better. The reason I bring this up is that I really think this… Read more »

Morning Steve. I would not agree with the assesment that the Argentine Navy outgunned and our ranged the RN in 1982. Their fleet was built around an old small Carrier with lots of problems and a World War 2 Cruiser. They did have a number of Type 42’s and other escorts but after the sinking of the Belgrano, the Argie Navy played virtually no part in the war. The RN taskforce was a sizeable and varied group that was able to protect the two carriers and inter alia, sustain a naval bombardment of onshore targets. Its submarine capability was also… Read more »

If the read the diaries etc of the time the fear was that even through the belgrano / carrier (more excorcets) were old they had range advantage over the task fleet, and that was ultimately why the belgrano had to be sunk. Whether people were just being cautious or if they really would have been a serious threat, we will luckily never know.

It was never designed to hunt subs just in the North Sea. Try the North Atlantic between the GIUK Gap. i spent many a happy (and Rough) patrol looking for subs up there.

Except for a WW2 era cruisers bigger guns how exactly was the Falklands task Force out gunned and out ranged in Surface warfare?
Both sides ships had Exocet so where pretty well matched in surface warfare. The RN had a lot of modern MK8 guns and the less modern Mk6 Twin guns all with radar control.
Surface Gunnery was a well practised art back then against surface targets. I took part in plenty of day and night( Using Star Shell) surface shoots

Harpoon is on the way out in its current form but is available in upgraded forms and is still widely used throughout the world. The USN is investing in surface warfare because like the RN it simply doesnt have the missiles to do the job and relies heavily on Air launched ASMs. Harpoon is only fitted to Ticos and a small number of AB batch 1s which are well past their sell by date and need serious upgrading to keep them even mildly relevant in a fight. ticos have 2 guns , ABs have one. AB flight 2 and 3s… Read more »

Hi Gunbuster – love reading about your experiences and insight!

Regarding your last point; aren’t Helios vulnerable to being shot down? Wildcat with 20 Martlett missiles looks menacing against fast attack boat swarms but what if those fast attack boats are carrying MANPADS?

I really liked the Martlett mount for the 30mm gun that was tested on HMS Sutherland a while back in the Irish Sea but haven’t heard a thing about it since then – do you know if the RN will bring it into service? I’m thinking no news is not good news!

The Wildcats also get all the bells and whistles optional extras when entering a high threat area. So as well as having the standard 360 radar which allows you to fly parallel to a target and not have to close it, Electro optics capable of seeing a vessel at 80km from height and completely passively and ESM kit to search for and identify emitters they also get Chaff and flare launchers and IR jammers.
Martllet would out range most manpads anyway and shooting a gun or even a manpads from a small swarm boat is not easy.

My assumption is USN was operating for many years on the assumption that nothing could touch it on the surface and the only real threat was from the shore with missiles or jets, so they invested heavily in anti air capability and land attack but let anti surface weapons age as they (and the RN) just didn’t perceive them a priority.

Why was the AShM capability of Tomahawk ditched? Being able to toss a missile at a land or sea target seems like a useful capability.

Tomahawk anti ship all got converted to conventialland land attack. Someone thought it was a good idea as they had harpoon and there wasn’t a lot of call for very long range anti ship