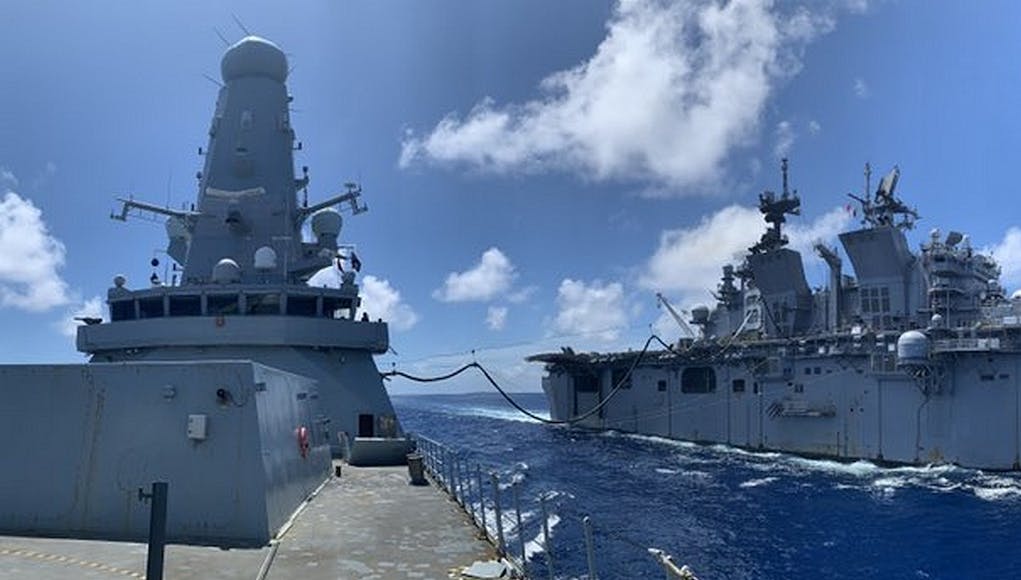 This is the first time a British warship has conducted a ‘Replenishment at Sea’ with a U.S. Navy amphibious assault ship.

A RAS with a difference!

This is the 1st time a British warship has conducted a RAS with a @USNavy amphibious assault ship 🇬🇧🇺🇸🥇@EXSTRGRU7 @31stMeu @USMC #CSG21 #WeAreNATO pic.twitter.com/eEisR9pMOz

A ‘Replenishment at Sea’ is a method of transferring fuel, munitions, and stores from one ship to another while under way.

Do our carriers have the same capability? I presume all large ships can donate fuel to others but don’t have booms etc.

Not sure about QE class but I know the Invincible’s could provide fuel, there was a small crane just fwd of the main superstructure which would hoist the fuel hose into position, provided limited amounts of fuel to escort ships.

Is there a sitrep on HMS Diamond?

Back in the 1960’s HMS Centaur did it on a regular basis, so I suspect other carriers supported their escorts as well

I guess what happens in Guam doesn’t stay in Guam?

Didn’t know carriers had this ability to pass fuel over .

Pretty much any vessel can pass fuel to another using an astern refueling rig. That is the easiest method and is the fuel transfer method used for fueling STUFT vessels because its easy to fit
Doing it as an “alongside” jackstay RAS is more complex as you require a lot of hoses, dedicated jack stay winches, strong points/high points and usually a crane.

it also depends on the connection method be it Probe or NATO QRC.

Now that’s what I call showing the flag!!