A C-130J Hercules operating from RAF Akrotiri has been conducting ground-based tactical refuelling of British Army Wildcat helicopters, which are deployed on a NATO mission in Estonia called Operation CABRIT, say the Royal Air Force here.

The RAF say here that this activity is known as an air landed aircraft refuelling point and enables aircraft to be refuelled in austere locations away from their main operating bases.

“The fuel is provided directly from the aircraft through a network of pipes and pumps.  This extends the distance the helicopter can fly and increases the availability of the aircraft by eliminating the need to transit back to base.

It is part of extensive work to increase the ability of the RAF, Royal Navy and British Army to work together on operations and as part of a wider NATO force.

This training provides valuable realistic training in an unfamiliar environment to both C-130 and Wildcat crews and proves a capability that can be used to refuel aircraft at temporary landing zones. 30 Squadron have also developed this capability for the Atlas A400M aircraft.”

Operation CABRIT is a UK led operational deployment to Estonia where British Army troops are leading a multinational battlegroup as part of NATO’s enhanced Forward Presence.

The future Blackhawk procurement should include 12 Pave Hawks. The future A400M additions should include some with aerial refuelling capability to act as tankers, to enable refuelling of the Pave Hawks. That way the RAF will have a CSAR capability, presently the UK does not have this….but what will happen is the MOD will order a pitiful amount of Leonardo helicopters, over budget, under equipped and delayed, all to “protect jobs” in the UK.

I think the lawyers at Air Tanker might have something to say about AAR.

I don’t believe it covers AAR for helicopters? Could be wrong though.

The Pave Hawk (HH-60G) is no longer in production. The USAF has curtailed the number of HH-60W “Jolly Green II” Helicopters, its successor, to be built and won’t be buying anymore after FY 23.

Did I miss that the RAF is procuring Blackhawks? Presumably to replace Puma. Blackhawk is such an old helo – why select it?

The Future Battlefied Helicopter type has not been selected yet. The modern versions of the Blackhawk are the ideal candidate…litreally an off the shelf purchase.

An off the shelf purchase that could go out of production at any time and won’t then benefit from future development and upgrades? Great idea.

Blackhawk is going out of production?

There is more than 4000 Blackhawks currently in service with Nations around the World. With local manufacturing and in-depth maintenance in Poland, Turkey and Japan amongst others (and a Chinese knockoff). Until the future US Army medium lift program has been awarded to either Bell with its V280 Valor or Sikorksy and its SB1 Defiant. The US Army along with the USN, USAF and Coastguard will still be procuring Blackhawks up to 2030, if not longer. If the UK did purchase the Blackhawk as the “interim” Puma replacement, it would give us at least 15 years of service before, we… Read more »

This might also be a very strong contender. In keeping with the British Government’s prosperity agenda, Airbus Helicopters UK says it would establish a final assembly line for the H175M at the company’s wing production factory at Broughton in Wales if it was selected for the NMH requirement, and that it aspires to export this helicopter version globally from the U.K. NMH is part of the UK Rotary Wing Strategy, with Leonardo Helicopters (UK) proposing to manufacture AW149s at its Yeovil factory if it was selected. During Vertical’s media flight in the H175M demonstrator aircraft, it was notable how few control inputs… Read more » 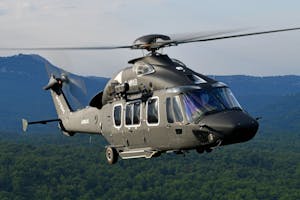 Ian B
Reply to  Nigel Collins

In light of those comments and if it fits the UK requirement, the government should get cast iron commitment from Airbus & order the platform. It could help the UK helicopter industry.

We’re not going to buy a 50 year old design like the Blackhawk. The agreement signed in February with the US virtually guarantees that we’re going to go with the US choice for the Blackhawk replacement to make interoperability easier.
That decision, between the Bell V-280 Valor and the Sikorsky-Boeing SB-1 Defiant is planned to be made this year. Hopefully being the first allied nation to be involved will allow us some influence on the final design.

The deal is more longer term. In the shorter term the MOD has confirmed it will be buying a solution. What it will be, who knows but as election period is approaching I can’t see it not involving UK firms, almost certaintly Leonardo.

C130J still proving its worth, utter madness winding the fleet down. I can see a faceless spokesperson from the MOD saying the fleet disposal will be delayed, the problem is crew availability the OCU must have wound down by now.

From what I understand they are worn out, they took a lot of abuse in the Afghanistan and Iraq, they have been in service a long time now. RAF was the launch customer for the C130J.

This is nothing new – I remember setting up exactly the same exercise over 25 tears ago.

“but what will happen is the MOD will order a pitiful amount of Leonardo helicopters, over budget, under equipped and delayed, all to “protect jobs” in the UK.”

Well regardless of whether Black Hawk is suitable for the UK ( I think it is ) Jays comment here is correct in my opinion.

It has happened before and will happen again. Then people will be moaning that 20 have replaced 40 and where have the numbers gone.

And if Black Hawk is selected people on here will be whinging about another list of UK defence industry capability. What ever the out come it will be a UKDJ moanfest

Well I guess the question is is it a critical industry to maintain compared to other areas? Do people want the numbers required or home industry? Whats the priority? Is the priority what the army would actually like or what local MPs want? I read and hear the army have wanted BH for decades. I.myself favour a balance of quantity and quality, that means sometimes an OTS design that is good enough which provides the numbers required for the money available, which the military want. Will this become the UKIJ instead of UKDJ? We go round in circles on this… Read more »

During my time in the RAF, I was on a unit called TCW. We would deploy into the field to provide comms for TSW (Tactical Supply Wing). They would have 3-4 fuel bowsers a command vehicle and ourselves. The job was to deploy into the field, the Helicopters would fly to the field we were hiding in refuel and re-deploy. Much quicker and easier than flying back to an airfield.