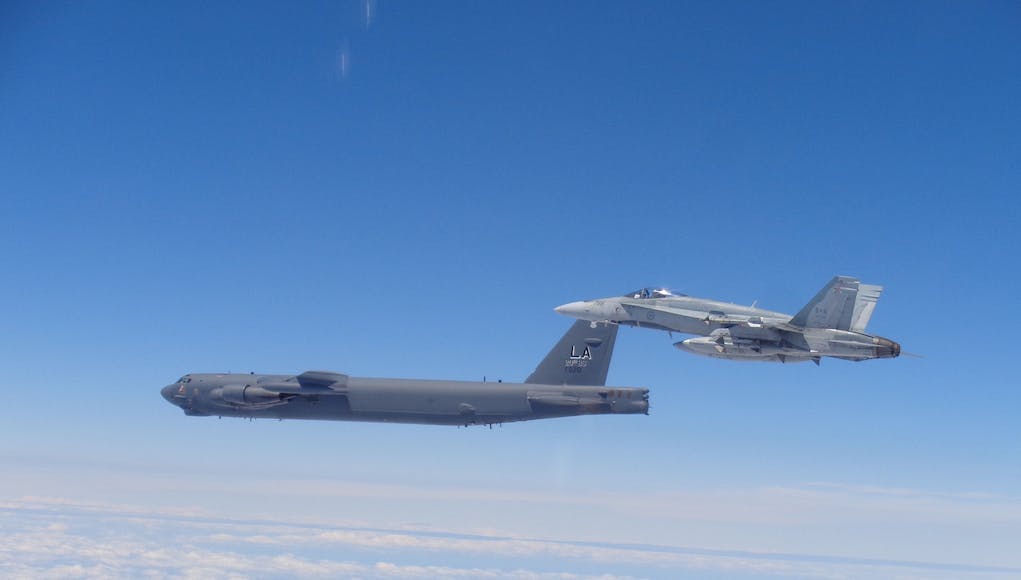 Royal Canadian Air Force CF-18 Hornet fighter jets practised identification and intercept procedures as B-52 Stratofortress bombers returned to the US from an overseas exercise.

According to NORAD, the B-52s were initially intercepted south of Iceland by RCAF CF-18 Hornets, who were operating under the NATO as part of Operation REASSURANCE – Iceland. The NATO controlled jets escorted the US bombers towards Canadian airspace before returning to Iceland.

This exercise took place twice over June 15 and 16 as the B-52s were transiting home. These USSTRATCOM long-range bomber flights provided an ideal opportunity for CANR to practice cross-border interoperability and coordination, all of which keeps NORAD forces well-prepared to defend the air sovereignty of Canada and the U.S.”

“Canada’s commitment to working with our American partners to jointly defend the airspace of North America through NORAD is a top priority for the Royal Canadian Air Force.

This exercise provided an opportunity for NORAD forces to work with NATO, to train and ensure they are prepared for the critical mission of defending North America.”

The B-52 Stratofortress bombers were participating in a US Strategic Command bomber assurance and deterrence exercise.