Two LRIP aircraft have already rolled off the line; the first began flight testing in January.

It is understood that the first front-line units are supposed to activate and receive aircraft this month and are expected to be combat ready by 2019.

In April 2009, a Wall Street Journal report indicated that, according to the Pentagon, information from the Lockheed Martin F-35 Lightning II had been compromised by unknown attackers that appeared to originate from China. There is some speculation that the compromise of the F-35 program may have helped in the development of the J-20.

United States Secretary of Defense Robert Gates downplayed the significance of the aircraft by questioning how stealthy the J-20 may be, but stated the J-20 would “put some of our capabilities at risk, and we have to pay attention to them, we have to respond appropriately with our own programs.”

The main weapon bay is capable of housing both short and long-range air-to-air missiles. Two smaller lateral weapon bays behind the air inlets are intended for short-range missiles.

That may be but it’s still rubbish!

The plane just looks wrong, its a horrible looking thing.

Another Chinese nock off 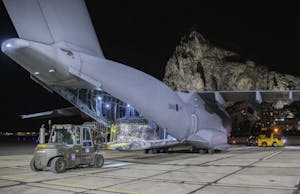 May 18, 2021
An A400M Atlas aircraft from 70 Squadron has delivered the latest batch of Coronavirus vaccines to Gibraltar.