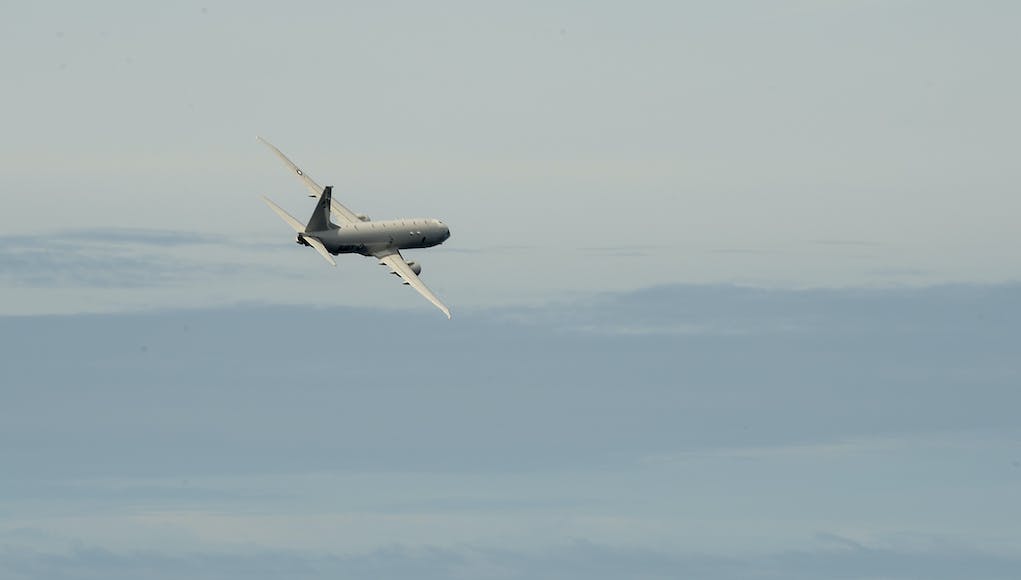 A U.S. Navy P-8A Poseidon Maritime Patrol Aircraft was lased by a Chinese Destroyer earlier this month while flying in airspace above international waters approximately 380 miles west of Guam.

According to a U.S. Navy statement:

“The PRC navy destroyer’s actions were unsafe and unprofessional. Additionally, these acts violate the Code for Unplanned Encounters at Sea (CUES), a multilateral agreement reached at the 2014 Western Pacific Naval Symposium to reduce the chance of an incident at sea. CUES specifically addresses the use of lasers that could cause harm to personnel or damage to equipment.

The destroyer’s actions were also inconsistent with a Memorandum of Understanding (MOU) between U.S. Department of Defense and the Ministry of National Defense of the PRC regarding rules of behavior for safety of air and maritime encounters. The laser, which was not visible to the naked eye, was captured by a sensor onboard the P-8A. Weapons-grade lasers could potentially cause serious harm to aircrew and mariners, as well as ship and aircraft systems.”

U.S Navy aircraft routinely fly in the Philippine Sea and have done so for many years. According to the U.S Navy:

“U.S. Navy aircraft and ships will continue to fly, sail and operate anywhere international law allows. U.S. 7th Fleet is the largest numbered fleet in the world, and with the help of 35 other maritime-nation allies and partners, the U.S. Navy has operated in the Indo-Pacific region for more than a century, providing credible, ready forces to help preserve peace and prevent conflict.”

The Poseidon should have returned the favour and got an active radar lock onto the destroyer. Not sure if the Poseidon was armed with harpoon or LRASM or not?

There is definate tension between the Chinese Navy and US Navy. It seems to me that even in the darkest days of the Cold War NATO and the Soviet Union stuck to the rules – there were accidents and plenty of tense moments, but I am not aware of there being this kind of deliberate agression. Of course it might of been well covered up with both sides participating in the missinformation, but things have changed on the international stage and not for the best. Nations are increasingly ignoring or stretching the rule of law which greatly increases the risk… Read more »

Hi folks hope all are well.
Let’s face ir China does not care about international law, they will certainly not worry about the reaction of the professional US Navy’s approach to managing tence flash points. The attitude is they have plenty of disposable assets, including Chinese navel personell.
Best wishes to all
George

You are right George, China has absolutely no respect whatsoever for International law! They operate on the basis of ‘we’ll do what we like, what exactly are you going to do about it?’ On the pretext that nobody will do anything at all………..

Hi George, Clearly China does not respect international law as demonstrated by their illegal ‘building’ new islands in the South China Sea to lay claim to international waters. My point was that it is not just China that is ignoring the rules, Iran, North Korea and Russia are pretty roguish on an on-going basis and others seem willing step well outside of reasonable behaviour when it suits them. The situation is not helped by many of these states making use of non-state proxy players enabling said rogue states to push the boundaries in a deniable manner. In short, the geopolitical… Read more »

Do you mean the Danish, French, German and Dutch fishermen saying they are entitled to fish in British waters and do not recognise British maritime territory? Yes agree dangerous times ahead.

Er, no. That is private citizens breaking the law and is a matter for the courts, if it ever got that far… I was referring to the increasingly overt amoral and illegal behaviours of nation states, including their funding and direction of non-state players. Some countries have always operated close to the limits (whilst being covertly beyond the limits). However, countries are increasingly openly operating out side of the terms of agreed treaties and international law to which they have signed and then simply deny their actions and/or ignore the fall out e.g. the Novichok attack in Salisbury (there were… Read more »

is it bad that bodyhair removal keeps coming to mind? the Chinese must have a clinic down there..