— On April 7 near Abu Kamal, a strike consisting of three engagements destroyed a vehicle and a fighting position.

Officials today also reported results of 11 strikes conducted April 5 through March 18 in Syria that were not reported in previous releases:

— On March 31 near Abu Kamal, a strike engaged an ISIS tactical unit.

— On March 22, a strike near Abu Kamal destroyed an ISIS headquarters.

— On March 18, a strike near Shadaddi destroyed an ISIS vehicle.

— On April 12 near Qaim, coalition forces conducted a strike against ISIS targets.

— On April 11 near Qaim, coalition forces conducted a strike against ISIS targets.

These strikes were conducted as part of Operation Inherent Resolve, the operation to destroy Islamic State in Iraq and Syria. The destruction of targets in Iraq and Syria also further limits the group’s ability to project terror and conduct external operations throughout the region and the rest of the world, task force officials said.

The list above contains all strikes conducted by fighter, attack, bomber, rotary-wing or remotely piloted aircraft; rocket-propelled artillery; and ground-based tactical artillery, officials noted. A strike, as defined by the coalition, refers to ‘one or more kinetic engagements that occur in roughly the same geographic location to produce a single or cumulative effect’.

With all the press hoopla following the Syrian raid, we tend to forget that for our boys and girls it was just another “day” at the office…

The Western war criminals attempt to create a new Iraq in Syria
http://bit.ly/2JL1Elc

will these Operation Shader raids persist? I don’t know which routes they fly from akrotiri and whether they avoid the areas of greatest SAM threat but surely they have to be at far greater risk now? 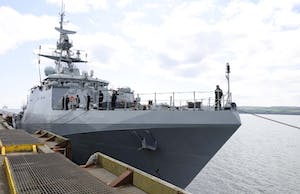 June 20, 2021
Built on the River Clyde by BAE Systems, the ship is the fifth and final of the second generation of River class vessels built for the Royal Navy.