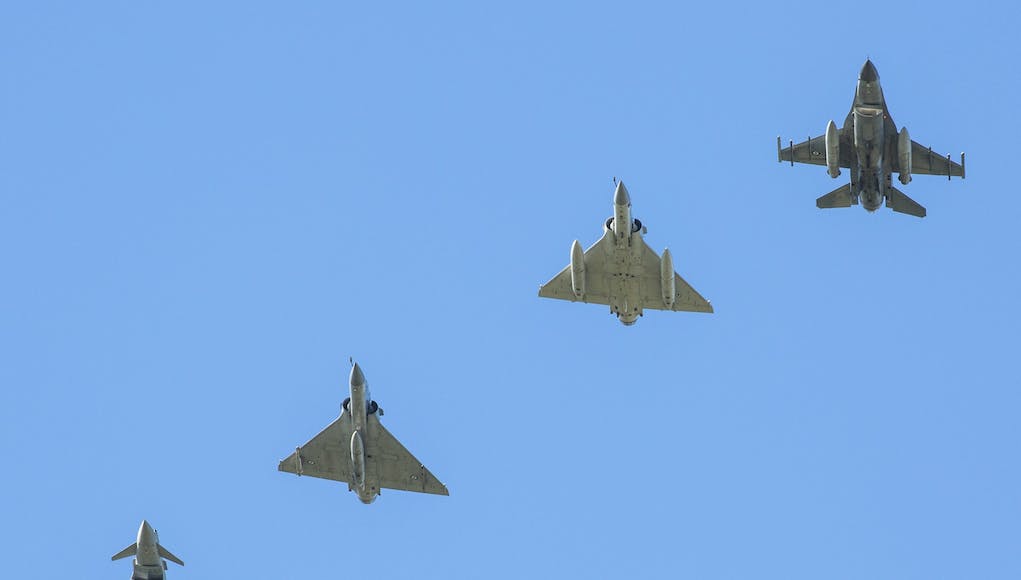 The Station Commander at RAF Coningsby, Lincolnshire has visited 3 (Fighter) Squadron that are currently deployed on the large NATO exercise that is being run in Greece, say the MoD.

The exercise that Group Captain Mike Baulkwill is visiting is Ex Iniochos 18 and is a multi-national air warfare exercise that is organised annually by the Hellenic Air Force in Greece.

Exercise INIOCHOS 18 is a Greek organised exercise over the period 5 to 23 March.  It is run by the Hellenic Air Force Air Tactic Centre and is based at Andravida Air Base in the North West Peloponnese.

This year in addition to participation by 3 (F) Sqn, who are normally based at RAF Coningsby, there are contingents from the United States, Italy, the United Arab Emirates, Cyprus and Israel plus the Hellenic Airforce from Greece. Over 70 fast jets of various types have been flying on sorties that have built up to simulated full scale war fighting across Greek airspace.

“It is one of the pleasures of my role as Station Commander, to visit personnel from RAF Coningsby when they are deployed on operations and exercises to see how well they are doing their jobs. A bonus for this visit is that I will also have the opportunity to fly a sortie on this exercise.”

“Despite the high intensity of the simulated combat exercises, 3 (F) Sqn have had other visitors, when a distinguished visitors day was organised by the Hellenic Air Force.  The principle guests were the Greek Defence Minister, Mr Panos Kammenos, the Chief of the Hellenic National Defence General Staff, Admiral Evangelos Apostolakis and the British Ambassador to Greece Ms Kate Smith CMG.

After first arriving aboard a Hellenic Airforce C130 the distinguished visitors were treated to a fly past by the participating nations on the exercise.”

“This has been the first time that Typhoon has deployed to Greece.  This exercise offers us a great opportunity to prepare for future operations and strengthens our existing relationship with the Greek Armed Forces.”

Anyone remembers when Greece ordered the Typhon? 🙂

Rest assured though, regardless of numbers all the senior Sqn staff will be there with even the added bonus of the Station Commander.
The weather is nice and pleasant this time of year.