Is it feasible? Probably not, no but engineers have taken a look at how the Royal Navy could embrace autonomous technology.

Led by a design challenge for young engineers from UK Naval Engineering Science and Technology (UKNEST), the Royal Navy say it will develop a ‘Future Autonomous Fleet programme’ that could shape how it operates over the next 50 years.

“Stemming from the design challenge, the future vision envisages drones based in the stratosphere to be launched at a moment’s notice; uncrewed fast attack crafts housing smaller autonomous boats; aircraft carriers propelled by both sea-based biofuels and wind power; and an underwater flagship at the centre of the fleet.

Other conceptual ideas include the increased use of artificial intelligence to assist with low-level planning and underwater transport units carrying anything from munitions to food.”

“In a future scenario if we find ourselves unable to compete traditionally in terms of mass, we must think differently if we are to regain operational advantage. The young engineers who worked on this project are thinking radically and with real imagination and reflects how the Royal Navy is thinking too.”

My only question is, whether this is realistic or not, why would this be under the control of the RN as opposed to the RAF or maybe even RSF (Royal Space Force 😂)?

Its launched from an airship! ﻿😀﻿

For when “the baloon goes up”?

We would have an endless supply of MOD hot air and Westminster BS gas to fill it with.

Looks like an autonomous ultra high altitude version of Airlander50

Could be launched from Thundrrbird 5

Should be cheaper No Strings attached

With stratosphere winds at 60 to 70 meteres a second they will need to have huge engines and fuel tanks to stay over target!! This will never happen.

To be fair, ICBMs do go up through the stratosphere and then come back through it and still hit targets.

Have a look at the UK HAV Airlander lighter than air heavy lift concepts with body shape itself generating lift once moving. Not saying that is anywhere near this concept but I can imagine a time when lighter than air models, coupled with solar power once airborne and body shape generating lift and propulsion into a headwind (similar to an albatros in nature) may provide a loitering presence (20 to 30 days at a time?) in places such as mid Atlantic..albeit at more modest altitudes. Intended amphibious capabilities would, in theory, allow for recovery of USV etc. USNavy and Marines… Read more »

Could be an interesting ride. Interestingly there are concepts of this nature being proposed for a permanent presence on Venus… well around Venus at extremely high levels anyway where apparently many think that the atmosphere might be reasonably un-killer like.

Another project to throw money at that will never see the light of day. 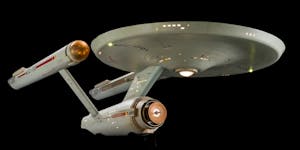 It needs more VLS cells and a bigger hanger and more guns and there should be 20 of them not one and ………..

No doubt built for and not with any credible armament though that big ass sensor on the front will at least be able to see the Klingon incoming…. unless the non cricket playing fiends attack from the rear.

The LOA would be to much for a Five year deployment

As I said on FB yesterday this idea was thought of by a certain Glenn A Larson in the 70s . It’s a Cylon basestar. An Ai operated mothership with AI dones (cylon fighters). The destruction of the 13th colony is nigh…So say we all.🤣

So say we all

Galactica even had Cats and Traps

Based in the stratosphere, are they building Cloudbase? If so those have to be called Angel Interceptors. This is the voice of the mysterons.

nice. next on the agenda solar power death rays.

Arcemedis supposedly built one and Mythbusters tried too replicate it

Well, Captain Scarlet had Cloudbase, so why the RN?