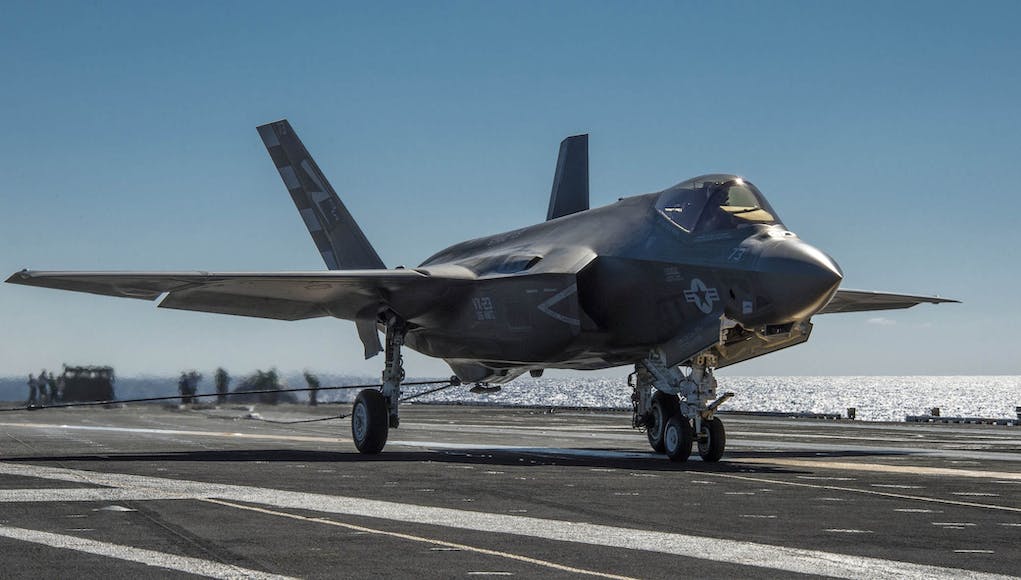 Inspectors have found a small crack in one of the wing spars of an F-35C carrier variant test aircraft, according to the Joint Program Office.

Compared to the F-35A, the F-35C carrier variant features larger wings with foldable wingtip sections, larger wing and tail control surfaces for improved low-speed control, stronger landing gear for the stresses of carrier arrested landings, a twin-wheel nose gear, and a stronger tailhook for use with carrier arrestor cables. The larger wing area allows for decreased landing speed while increasing both range and payload.

The United States Navy intends to buy 480 F-35Cs to replace the F/A-18A, B, C, and D Hornets and complement the Super Hornet fleet.

The test aircraft is being used in what’s called “durability ground testing”, a normal test programme in which testers apply loads to the airframe to simulate operational flying and identify any potential problems. Such discoveries are expected during a developmental test programme.

“The purpose of durability testing is to intentionally stress the aircraft to its structural limits so we can identify any issues and corrective actions needed to fix them.”

The test aircraft with the crack had more than 13,700 test hours, which equates to 6,850 flight hours — or more than 20 years of operational flying.

And cannabis in the undercarriage?…..

It’s what testing is for………to test how far the aircraft can be pushed.

Indeed, we make this clear in the article.

Roll up, roll up… bets on the next fault delaying things… Ejector Seat safety pin missing ? Lack of spare Ford spark plugs ? An engine with a VW emissions motherboard ? A beer holder that only carries Canadian beer cans ? A cigar ash holder too close to the aircon system ? Or is the seat cushion not comfy enough ?

It’s a load of junk lol

You didn’t read the article did you…..

Love armchair warriors indicating something is junk when they truly know nothing.

Rule of thumb, anyone that writes “lol” is retarded and their views matter nothing at all.

Not according to people with first hand experience

su 37 is a very aircraft

Antonio so the sum of your argument is the Internet. You know absolutely zilch about the aircraft so your argument is worthless.
As for the Su37 it is deceased. It never existed except as two prototypes built up from the Su35…which in turn is from the Su27…An aircraft design that dates back from the early 90s.
Go away troll and come back when you have a half decent argument.

I know
but is more powerful than f 35 because all aircraft is better than f 35
i”m not a troll
p.s
now there is t 50
and wath is your argument about f 35?

T50 is still on the drawing board and therenis little proof about it’s capability. Again it is from the Su27 upgrade line…so not truly designed from scratch but more an upgrade of an existing airframe.
Anyway I am not going to be drawn into an argument where you pathetically suggest every aircraft is better than the F35. Sad kid….go away troll.

Antonio Maksimil’yan Romano Sorry, you have no idea what you’re talking about.

> The test aircraft is being used in what’s called “durability ground testing”, a normal test programme in which testers apply loads to the airframe to simulate operational flying and identify any potential problems. Such discoveries are expected during a developmental test programme. < Endex.

JEEZUS PLEEZUS…it says ON the wing spar, so I thought that they meant the DRUG!! DUUUHHHH on my part!! LMAO

This is what testing is for – no argument there. The USN is being sensible in that they are purchasing relatively few examples before SDD (testing) is completed – unlike the USAF and USMC who are purchasing dozens and dozens of aircraft that will have to be modified once all the design defects are discovered. This strategy, aka “concurrency” will add an average of about $9M to the final price of these early production jets. Partners who buy early in the program will also face these costs, which is one reason why they have been slow to ramp up their… Read more »

Yes, as the article states.

Liquid nails will fix it