DARPA say in a release that the programme seeks to develop and demonstrate air launch and air recovery of up to four unmanned aerial systems (UASs), known as Gremlins Air Vehicles (or just Gremlins), within 30 minutes. 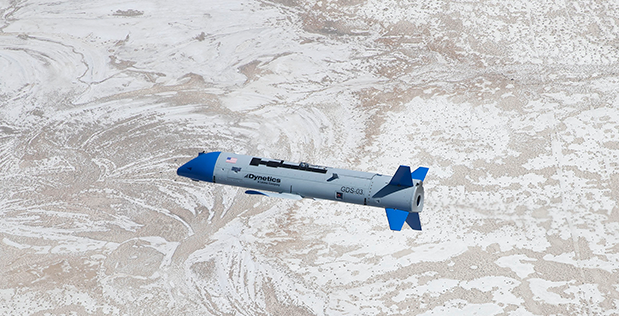 “Over several days in July, the technology development team completed multiple flight tests of the Gremlins air-vehicle ground and recovery systems, including demonstration of a recovery system safely retrieving and stowing the air vehicles. The team also conducted a controlled launch of a Gremlin flying for more than two hours and performed rendezvous and autonomous formation station-keeping between the air vehicle and a C-130 at a separation of 125 feet. The July flights follow the program’s first flight test in November 2019, during which the program completed one captive-carry mission, and an airborne launch and free flight lasting more than 90 minutes.”

“The air vehicle performed beautifully from launch through mission modes, and the consistency between the flight tests in November and July increases confidence in the X-61A,” said Scott Wierzbanowski, the Gremlins project manager in DARPA’s Tactical Technology Office.

“However, we made a decision to delay the first air recovery attempt and instead focus on key risk reduction activities to better ensure a smooth air recovery test later this year.”

The programme now calls for flight tests to resume in October with the key objective to recover first one, and then two, air vehicles in the same flight. By the end of the year, the programme aims to complete the test series, culminating with airborne recovery of four Gremlins within 30 minutes.

This final demonstration is expected to showcase the capability of safe, effective, and efficient air recoveries.

I wonder how they recover them, brings back memories of the flying aircraft carrier work the US carried out with Airships and small fighters in the 30s. Hopefully this will work out better… and safer.