Defence Secretary Michael Fallon met with his Qatari counterpart to discuss regional issues, including the need to counter terrorism.

Mr Fallon hosted Qatar’s Minister for Defence Affairs His Excellency Dr Khalid Bin Mohammed Al Attiyah in London to reaffirm the commitment to tackling terrorism, including in Iraq, Syria and Libya, as well as joint training between the UK and Qatar.

“Qatar is one of our most important allies in the region and, as we stand together to defeat Daesh and other violent extremists, it is important to reaffirm our strong and growing ties.”

The Defence Secretary also visited Qatar, during which he attended the Doha International Maritime Defence Exhibition and Conference, and announced that the UK would lead the Gulf-based Combined Task Force (CTF150), which aims to tackle terrorism and disrupt smuggling in the region.

Additionally Mr Fallon announced the creation of a new Deputy Defence Attaché role in Qatar, which will ensure strong and continued Defence engagement.

Britain and Qatar signed a Defence Cooperation Agreement in November 2014. Britain’s Royal Air Force has an air base in Qatar known as Royal Air Force Al Udeid, located 17 miles south west of Doha. The facility served as a station for British air operations in support of Operation Telic and Operation Herrick – the designations for British operations in Iraq and Afghanistan respectively.

As of 2015, the air base is being used as a headquarters for British forces involved in Operation Shader, the UK’s military intervention against ISIS in Iraq. In February 2014, the Royal Navy warship HMS Monmouth hosted NATO delegates in the port of Doha in Qatar. 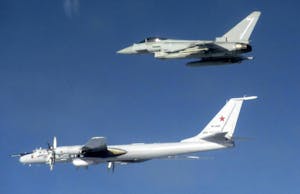 June 19, 2022
The UK, on occasion, scrambles jets to intercept unresponsive aircraft in Irish-controlled airspace but make no mistake, the UK is not protecting Irish airspace.