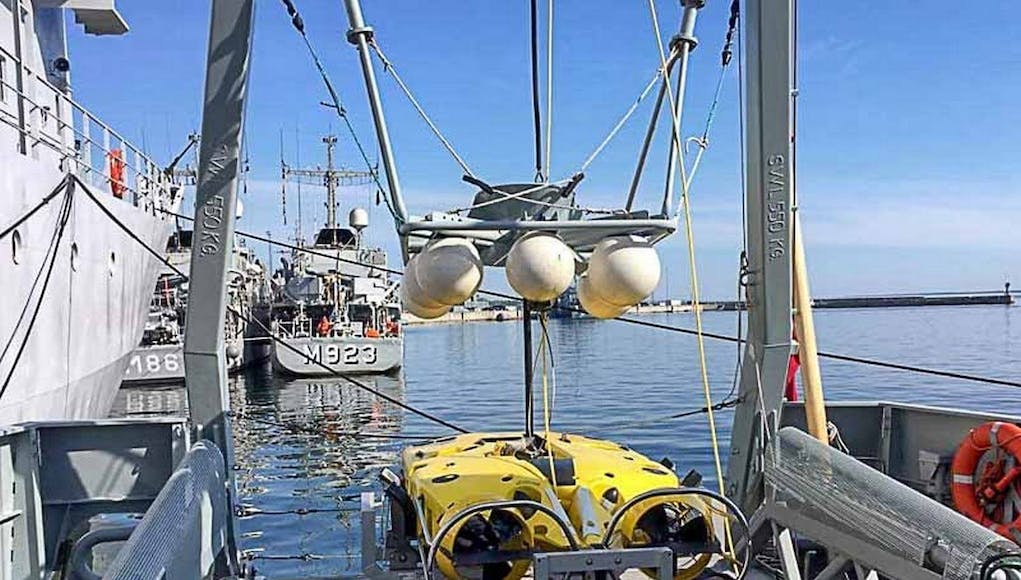 Denmark has been operating with Standing NATO Mine Countermeasures Group One (SNMCMG1) over the last several weeks, employing the Danish modular mine hunting system to keep sailors out of the minefield while hunting for naval mines.

MCM Denmark is composed of several parts, a containerized command and control node operates from the group’s flagship HNLMS Mercuur and controls two smaller ships and remotely operated drones. The number of containers, equipment, drones and ships are all variable making the system very flexible and scalable, depending on operational requirements and support platforms available. This is the first time MCM Denmark and HNLMS Mecuur have operated together.

“Working with SNMCMG1 again has been a great opportunity to continue the development of MCM Denmark and to enhance the interoperability with another international support platform,” said MCM Denmark Commanding Officer LtCDR Anreas Johansen.

For the current period whilst attached to SNMCMG1, MCM Denmark has one command container,  one remotely operated drone (MSF1) towing a side scan sonar and one ship (MSD6), which is used to conduct identification and neutralization with a Mine Demolition Vehicle. In total the crew from MCM Denmark in SNMCMG1 consists of 18 sailors, which also includes a small team embarked in HNLMS Mercuur.

SNMCMG1 is participating in exercise BALTOPS in the Baltic Sea along with more than 4700 sailors, airmen and marines from 22 Allied and Partner Nations and is designed to improve flexibility and interoperability as well as exercise multiple warfare specialty areas including air defense, maritime interdiction, anti-submarine warfare and amphibious operations in a joint environment.

Standing NATO Mine Countermeasures Group 1 (SNMCMG1), which is one of four Standing Maritime Groups under the command of the NATO Maritime Command (MARCOM) which are multinational, integrated maritime forces made up of vessels from allied countries.  The vessels are under continuous NATO command and perform a wide range of tasks, including mine countermeasures.

I find MCM warfare absolutely fascinating. The cheapest form of A2/AD requires highly dedicated and sophisticated countermeasures, but unfortunately it is usually considered the Cinderella service branch. I say all power to them! Especially since it is a specialism in which Europe excells and where we can really bring a valuable contribution to our American allies.

We really need to get serious about developing a variety of UUVs for jobs like this (if we aren’t already, I’m not in the know about this stuff). There seems to be so much of an emphasis on mission bays to allow vessels to utilise the capabilities of unmanned vehicles without much talk of any progress related to the development of said vehicles.

Surely we could cut mine sweepers by 50% and replace with drones from t31? Freeing up sailors

I suspect this is in part the thinking behind mission bays on cheap frigates like the T31.
The number of frigates increases as the expense of dedicated minesweepers and hunters.

not a bad idea.

armed stealth drones in large numbers could be the way forward

“MCM” Denmark is a system made of command container, to be deployed from “other” ships, controling
– 2 MSD Holm class 98t MCM drones (with MCM ROV)
(other 4 Holm class are manned, for training and survey)
– 4 MSF class 125t drones (with side-scan sonar?)
– 6 (in reserve) MRD class 32t drones.

A beautiful example of our AI containerized weapons future. Able to sniff out anything, anywhere, on auto.

‘Mine sweepers’ do not get rid of the threat, Mine Hunters do. Sadly the sea bed is littered with Mine-like contacts and even the best drones need a little help determining what is a threat. Keeping human operators out of the threat area is the only way forward but the sailors are always going to be needed. It is also worth noting that they are some of the most skilled; both in terms of seamanship and technical ability.

The BMT paper on the Venari 85 is an interesting read since a lot of the paper (the first bit) is BMT’s explanation of mine sweeping approaches. I’ve no idea of the validity of what they say, maybe it is a skewed presentation to make a case for some of the capabilities of the Venari 85 design, but they discuss channel standoff that apparently involves the mothership needing to enter an active minefield, albeit within a channel already swept and cleared by the mothership’s drones. The conclusion that BMT draws is that you can’t have any old ship being a… Read more »

Thanks for that link Julian. Very interesting. I’ve always thought the Venari design showed a lot of promise and was the way to go for a combined MCMV, Hydrographic and OPV design. But I fear it will never happen because a) it represents new, radical out of the box thinking, and b) because as BMT claim themselves, they are an ‘independent’ design bureau – not part of the MOD/Thales/Babcock/BAES caucus. Not invented here I’m afraid…