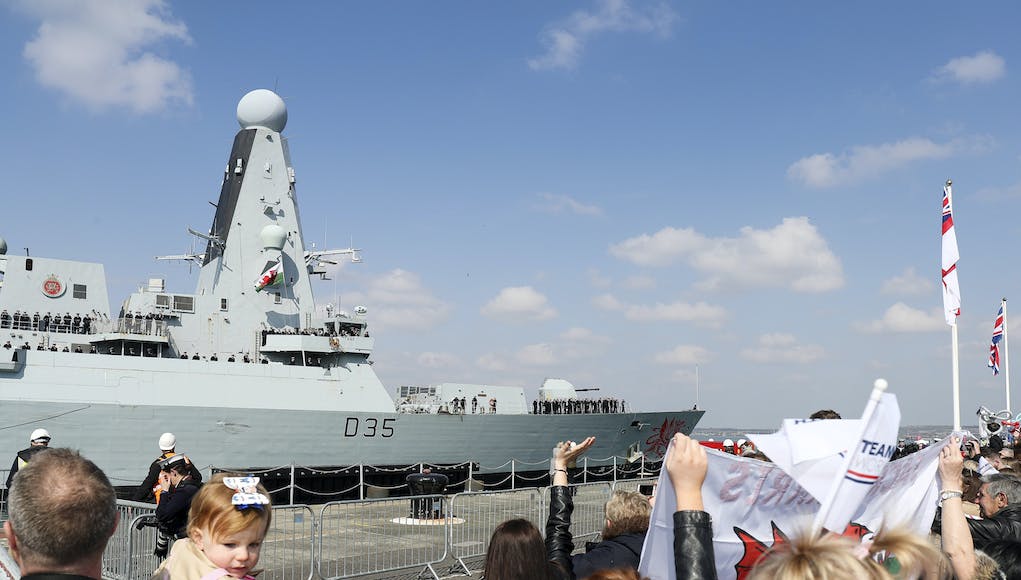 HMS Dragon has sailed back home to Portsmouth after her deployment in the Middle East.

HMS Dragon deployed from Portsmouth on the 17th September 2018 and has spent the last seven months deployed on Operation Kipion in the Gulf and the Indian Ocean, say the Royal Navy.

She arrived back home on the 12th of this month.

“It really is great to be home. It’s been a long and exceptionally busy 7 months.

During dedicated periods drugs busting with global counter-terrorism organisation Combined Task Force 150 Dragon made an astounding eight drug seizures, amounting to more drugs captured in seven months than the entire police force of the UK in one year.

The achievement is the greatest drugs haul by a Royal Naval unit in recorded history.

“HMS Dragon’s impressive contribution to UK/US operations, regional engagement and record narcotics seizures highlights the high regard with which Dragon is held amongst allies and friends. None of this would have been possible without the steadfast support of her families and friends back home, some of whom have had the opportunity to embark over the last 24 hours.

I am immensely proud of all she has achieved and would like to congratulate her Ship’s Company as they return to Portsmouth today.”

Watched Dragon arrival live on webcam plus the departure of Tidesurge more by luck than anything but missed carrier departing. Anyone know where we can get some advance warning as its nice to occasionally see something of the bits of kit we are discussing?

Try going on to QHM Portsmouth’s website, where you will see all the intended movements posted. You can also get advanced notice of a big move, such as one of the carriers, because they promulgate closures of the channel, sometimes a day or two in advance.

Just what I needed thanks Nick

I wonder how they got they dent/gouge 15 yards to the left of the D35, does it come out of someones wages 😉

Wouldn’t basing a type 45 next to Hms Montrose in Bahrain make sense. Well after the intercooler troubles fixed.

@ Bob, With HMS Prince of Wales, HMS Dragon and a future HMS Cardiff, Wales for the size of the nation could have one of the best carrier strike groups in the world, all we need now is a HMS Monmouth, got to keep the black flag flying. Strike Group Celtic anyone. Slightly of track but possibly of interest I found out whilst doing some research for an article that I am writing that the Royal Navy does not need to swear an oath of allegiance as they are not formed by statute as the Army or RAF is but… Read more »

Interesting though I thought all the major forces were technically responsible to the Crown. I always thought the oath was to the Crown so if it does not have an oath then to whom indeed do they owe allegiance? I guess ‘Royal’ tends to give the answer despite that I suspect.

@ Spyinthesky, I think that because the Army and RAF is formed by an Act of Parliament they need to take the Oath of Allegiance to the Crown, whereas the RN being formed by Royal Prerogative allegiance is automatically implied. Also my understanding is that the RN is not maintained under an Act of Parliament but by the Will of the Sovereign.

With regard to the Welsh Flag comments we should remember that Wales is not represented in the Union Jack due to some historical absurdities so it is understandable that their Flag should be such a powerful symbol for them. To suppress or denigrate the Welsh Dragon would only fuel the nationalist cause. The majority of Welsh people regard themselves as both Welsh and British so let us help keep it that way. Going forward I would like to see the UK follow the SA Flag experience by leaving the meaning of the Union Jack open to several interpretations. So in… Read more »

@ Geoff, I am a proud Welshman and a loyal Brit, the reason that the Welsh dragon or the yellow cross of St David is not on the UJ is because of annexation in the late 13th century. Wales was incorporated into England by the Wales Act 1535 so from the flag perspective we come under the cross of St George. It’s also the reason that Wales did not have an official capital until 1955, even the Welsh Dragon is only officially from 1959. What many people also don’t seem to understand is that the UJ has no law stating… Read more »

Hi Ron. Thanks for your comments. The Wales Act is no longer fit for purpose. I doubt whether there is a Welsh person alive-Nationalist or Unionist who does not regard Wales as a Nation in it’s own right and especially who thinks of Wales as part of England!! Time to change the laws and also to incorporate a symbol for Wales into the fourth quarter of the Royal Standard(Prince of Wales feathers?)
Sunny Durban is fine although our local Rugby team the Sharks,are rubbish at present! Kind Regards

The importance of flags

Biggest helicopter in the US Navy lands on HMS Queen Elizabeth