Let’s take a closer look at Dragonfire, the new laser weapon demonstrator being built for the UK.

Led by MBDA, under contract to Dstl, UK Dragonfire is a grouping key players in the defence industry brought together to develop this new system for the UK Armed Forces.

For the first time, the consortium revealed the design of the turret – known as a beam director – that will be used to trial this new technology. The beam director, which will be provided by Leonardo, brings together QinetiQ’s powerful laser emitter, as well as electro-optics for target identification and tracking. MBDA say it is bringing weapon system delivery experience and advanced weapon system command and control (C2) and image processing capability to UK Dragonfire, in addition to coordinating the overall effort.

A full-scale beam director mock-up pictured above was present at UK Dragonfire’s stand, in the Naval Static Display Area of DSEI earlier in the month. Half-scale models are also present on the stands of Leonardo, MBDA and QinetiQ.

According to the MoD the programme will develop technologies for a high energy defensive laser weapon system in the 50kW class. The Laser Directed Energy Weapon (LDEW) Capability Demonstrator is set to be built by MBDA UK Ltd and a prototype delivered by 2019.

The prototype system will be capable of engaging representative targets in land and maritime environments in 2019. The programme will also provide the body of evidence for future procurement decisions.

“The UK has long enjoyed a reputation as a world leader in innovation. Our new Innovation Initiative will transform Defence culture to ensure that we stay ahead of the curve.”

“A novel laser weapon could complement or replace existing weapons systems with the potential for significant benefits. It could be employed to protect our maritime and land forces; for example, ships from threat missiles or soldiers from enemy mortars.”

MBDA UK Ltd will assess how the system can acquire and track targets at range and in varying weather conditions over land and water, with sufficient precision to enable safe and effective engagement.

A key benefit of the Dragonfire LDEW technology according to MBDA is that the base system is highly adaptable and its effects are highly scaleable. As such it offers a range of different engagement solutions depending on the tactical scenario, these include tracking, deterring, dazzling the sensors of a potential threat, up to damaging or destroying it. 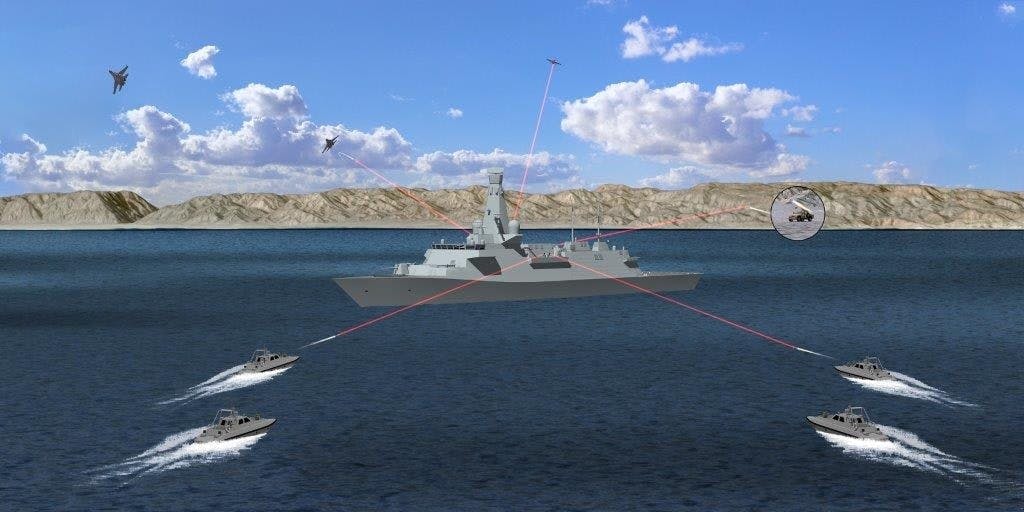 UK Dragonfire was awarded a £30 million contract for the LDW CDP in early 2017 after a rigorous competitive evaluation. The team capitalises on the strengths of all the companies involved, including Leonardo, QinetiQ, MBDA, Arke, BAE Systems, Marshall and GKN.

This news will see Britain join the laser weapons arms race after America has already deployed a laser to the Gulf on one of its own warships.

America deployed a working laser weapon system on board USS Ponce in the Gulf a few years ago. The laser has been successfully tested shooting down drone aircraft and burning up small attacking boats, or at lower power to “dazzle” sensors and instruments.

The AN/SEQ-3 Laser Weapon System reportedly worked perfectly, indeed the commander of the Ponce is authorised to use the system as a defensive weapon.

Energy weapons are an increasing focus for defence firms and expected to become more common on the battlefield in the next decade.

If successful, the first laser weapons would come into service in the mid-2020s.

Could they be perhaps used to shoot down hypersonic missiles? Not sure if that would be negated by the mesures designers take to counter the huge heat generated from going at those spress but it’d be cheaper than investing billion into developing a counter missile.

AIUI current directed beam weapons require significant dwell time on the target in order to deliver the energy to destroy it. They could therefore be effective against relatively slow moving targets like small boats and drones, but would not have time to be effective against hypersonic missiles.

I wonder if a weapon that emits high energy microwaves at a hypersonic missile could spoof the radar tracking system. Hypersonic missiles will miss by a country mile if forced into any small tracking error or a sensor overload. Any thoughts on this?

well, the Kalibr uses radar image matching.. so I’m unsure if decoys and the rest will work at all

The system on Ponce is considerably larger than the Dragonfire mock up in the picture . On Ponce it is something of a demo system hence it looks like lots of individual parts glued and bolted together and then stuck on the bridge roof…It was still fitted when Ponce was in the Gulf a few months ago.

What we see in the white world and what the likes of DSTL/DARA are developing in secret way different.
Will we actually develop this tech now or give up and let others reap the benefit?

Great to see stuff like this! Hopefully it will end up on our surface fleet in due course. I especially like it for swarm attacks from highly maneuverable small boats. I am concerned our current ship defenses would be overwhelmed by such large scale attacks. There is only so much Phalanx and the 30mm cannons could do before running out of ammo. I would be interested to here what everyone thinks is the best defence against swarm attacks as I see something like that actually happening in the Persian Gulf in the not too distant future. In my opinion we… Read more »

[…] may or may not have heard about Dragonfire – the UK laser weapon being built to take down airplanes. Laser pointers themselves will also […]

First laser weapon on USS Ponce?
What about Cheevage fitted for the Falklands in the early 80s??!

Thank you for sharing, it’s given me more information about the military weapon and the article is so impressive to me