Qinetiq have discussed the schedule for the testing of ‘Dragonfire’ a new British laser directed energy weapon.

The first project to be undertaken at the new Dragonworks laser test facility will be the assembly and testing of the laser directed energy weapon (LDEW) currently in development by the UK’s Dragonfire consortium.

Components arrived in early 2018 and QinetiQ will started building the weapon’s laser source in the purpose-built clean room. Over the following months, the laser source will undergo a process of evaluation and adjustment before being integrated with Leonardo’s beam director.

The project will culminate in operation at full-power under test conditions inside the facility “soon”, before it is transported to MOD Shoeburyness for long-range outdoor trials later in the year.

Data collected using the Reflective Hazard Assessment Tool will inform the safety case for these and future trials, ensuring the reflectivity of targets is fully understood and any risk mitigated accordingly.

Peter Cooper, the Project Technical Authority in Dstl, which manages the Dragonfire contract on behalf of the UK MOD, said regarding the new test facility:

“This facility is a key step in delivering the Dragonfire project and reflects the continuing UK MOD investment, supported and enabled by industry funding, amounting to tens of millions of pounds in UK industrial skills and capabilities and underpinning UK prosperity.”

Good
We need direct energy weapons to defeat the latest hypersonic Russian and Chinese anti ship missiles.
If the RN can bring dragonfire online and into service without bankrupting the country then all well and good.
Now just got to sort out rail guns.
Weapons like this give the UK a qualitative advantage versus PLAN/ Russian navy

How will it defeat hypersonic weapons? Will it just dazzle the missile’s sensors such that it misses, because I wouldn’t have thought that it has the time on target to physically damage the missile?

I’m sure I read that pulsing a laser for a couple of seconds at a range of something like 5 miles is enough to punch through the casing and into th internals.
This is a 50kw laser, once this is perfected I would assume they will start on 100kw and above for some serious range and power. This is just the start I would hope.

I’m not sure it will even be able to make a hypersonic missile miss, assuming those missiles are still hypersonic all the way to impact. If a missile is closing at hypersonic velocity then, at the range one of these early generation directed energy weapons is likely to be able to effectively engage, even if it could dazzle sensors the velocity vector of the missile at that point is likely to be dead on target for a ship with only a fraction of a second left to maneuver before impact so those sensors would no longer be needed for any… Read more »

Thankfully I think China and Russia’s hyper-sonic missiles are still over 10 years off.
China can’t even copy let alone design their own indigenous jet engines that can complete with late 90’s era Russian, US and European engines.
The Brahmos gets a lot of good press but I doubt very much they have the technology to have an air launched cruise missile that travels 400km at mach 4 or anywhere near it.

Good point. We might be in danger of over-hyping some of our own new technology but the same can also be true of potential attackers’ capabilities.

I doubt we’ll start our own railgun project, BAE are already involved in the US railgun programme and it makes more sense to just buy their version when its finished.

We should definitely invest heavily in lasers though, if we can get a combat ready system in production quickly we can likely dominate the European market as well as dramatically increasing the effectiveness of our ships CIWS

Reinmettal have been testing laser weapons for over 2 years now so I fear BAE and Leonardo are playing catchup. It is technology the UK needs to develop though and it will be interesting to see if it can be incorporated onto ships as so far the US and Germany have only been testing in dry climates.

The U.S. has been testing one at sea already on the USS Ponce

We had, I don’t know what we have now, a rail gun project before 1997. You can find academic papers in the public domain from British academics written in the 1980s.

One of the senior lecturers at the university I started at in 1997 showed me a billet of metal that was used in one such test. It is was curled up on itself and totally deformed merely on account of the magnetic field that propelled it and not any physical impact. Who knows what we have now – if anything.

Nat, BAE Systems have one working for the US Navy and are very close to deploying it on board their ships. It can fire a round at 5,600 MPH.

if the dragonfire system works it will be as big as big an addition to naval history as the torpedo, i hope the u.k stays at the very forefront of these systems development

fingers, toes and eyes crossed on this one. it could be the biggest step forward in military weaponry since the torpedo the MUST be at the forefront of this technology.

and the U.K needs to establish itself as the leader in the field.

just a thought, what about a modern battleship, fitted with railguns instead of conventional 12-16″ guns, does anyone think there could be potential in this for the future?

Keith – interesting idea,if it is a viable proposition I would guess that the first country to put it into practice would be China.

china has already mounted a prototype railgun on a boat…… which actually puts them ahead of the us in that regard…. last i saw from them was on shor testing with an autoloader…

i think its unlikely, the sizes of them would need a large platform. i’d prefer to see a ceptor system on all r.n ships especially ships like Q.E and the albions.

Do we really need a foreign company (Leonardo) to make the beam director for us? I’m sure we don’t. It’s almost like someone is making 110% sure we NEVER end up with a product of our own.

It’s Leonardo’s UK arm, but I agree with your point. Leonardo likely receive more state support from the UK than they receive from Italy, so how much of that money is rinsed back to Italy to support their Italian subsidiaries. The same applies to the Merlin, I’m pretty sure far more of those helicopters components are produced in Italy compared to the numbers ordered by the Italian government especially on export variants.

if it is a u.k design then it is ours and stay ours, if others want it screw them for every penny we can get for it, like america has done to us with the f 35

Was thinking virtually everything Bae produces in the US is restricted from being passed on to its British parent do we have similar rules in place for Leonardo, Thales et al, indeed any limits at all from transfer of intellectual property. I wouldn’t trust the French to keep to any such rules anyway mind.

My understanding was that rheinmetall and MBDA Germany’s laser tech wasn’t as efficient as ours. Something to do with the photons not being completely aligned which diffuses the energy I think meaning it takes much more power to achieve the same effect. It sounded like theirs was basically hitting a brick wall.

I hope that Dragonfire becomes a reality for the RN. There are a few questions though, I wonder what is the recycle rate, what I mean with that is how many times can it fire and how quickly. With the RN operating mostly in the N.Atlantic with its high humidity levels how does Dragonfire over come thremal bloomin. If the system can double its power output would that double its range? I don’t know but something tells me not really. Possibly it might be better to double the power whilst keeping the same range but improving recycle rate and tracking… Read more »

Would be interesting to hear more about what your prof friend tnought on the matter even if his expertise might not be exact I am sure his insights would still be worth hearing as a strong guide to potential and time frames, certainly when compared to most of us. I know little about them but can’t help but think Rail Guns are still too far off and their final form and specs too nebulous to plan more than marginally in any present ships size and power alone might make existing drawing board designs inefficient for 10 to 15 years of… Read more »

Lasers do not a good weapon make in the maritime environment. Moisture in the air and the IR windows in the atmosphere limit what you can do with them. Doubling power does not double range. If I remember correctly from my pinky system engineering training ( i am used to dealing with things that go woosh and bang) you need the inverse square rule so a doubling in range for a radar requires a 16x increase in power for a transmitter. As a laser is not requiring a return signal (as a radar does) that should mean a 8x increase… Read more »

At those photonic energies at short pulse duration the beam causes a self focusing effect through the atmosphere and effectively tunnels through the air and also restricts the beam divergence so the energy remains concentrated into a relatively small beam diameter….

OK folks, lets leave behind the notion that Dragonfire is designed to dazzle say an incoming missile threat, its not. Dragonfire is a prototype laser designed to investigate how a laser can be used to destroy a target. The inverse square law is absolutely appropriate for both lasers and radar. The main problem of using a laser to destroy a target, depending on its frequency, is atmospheric absorption caused by air molecules and diffraction caused mostly by moisture. You can to some degree get around these issues by ramping up the power, but you still will need to overcome the… Read more »

Q Swtiching the laser can boost massively a laser such that a 50 kilowatt laser would be at least double. The duration of pulses is very short but the power density will slice through a missile like a knife through soft butter. Tracking a target in a rough sea and in heavy rain or for is a bigger problem due to beam attenuation due to absorption by water molecules. Shifting the frequency can help get around this but if the power is high enough the energy will vaporise water droplets, though range will be limited. Such weapons are certainly the… Read more » 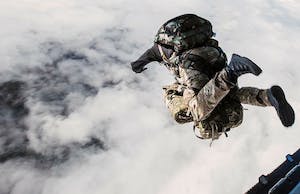