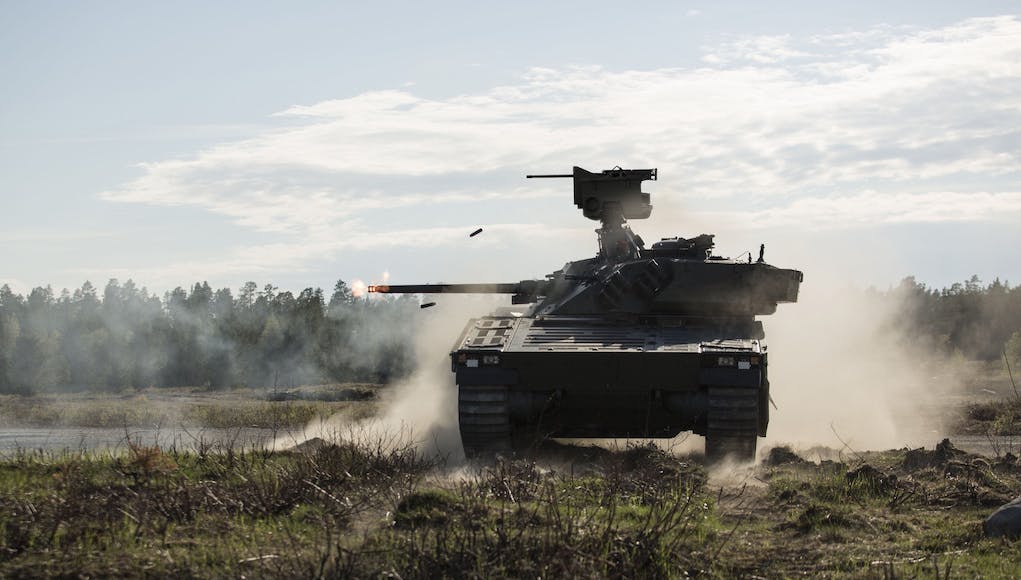 Share
Facebook
Twitter
Pinterest
WhatsApp
Email
BAE Systems has received a contract from the Dutch government for the testing of Active Protection Systems on its CV90 Infantry Fighting Vehicles.An active protection system is designed to prevent line-of-sight guided anti-tank missiles/projectiles from acquiring and/or destroying a target. They come in two categories, soft-kill and hard-kill.Electronic countermeasures that alter the signature of a target thereby altering the tracking and sensing behaviour of an incoming threat are designated ‘soft-kill’ measures. Measures that physically attack an incoming threat, destroying/altering it in such a way that the intended effect on the target is severely impeded are designated ‘hard-kill’ measures.
BAE Systems, the manufacturer of the Dutch CV9035 variant vehicles, will lead the APS integration.

According to a press release, BAE Systems will also carry out the future installation of the system, called Iron Fist, developed by Israeli supplier IMI Systems.

Tommy Gustafsson-Rask, managing director of Sweden-based BAE Systems Hägglunds said:
“Iron Fist will give the Dutch Army a highly sophisticated defensive tool on its CV90s to counter threats and improve the safety of the vehicle and its crew. Iron Fist is yet another example of the advanced technology BAE Systems and its partners can deliver to our customers.”
BAE state in a press release:
“We expect to make a decision on the next phase by early 2018. With Iron Fist, the Netherlands is expected to become the first NATO country with an Active Protection System of its kind on combat vehicles.”
Hans de Goeij, project manager at the Netherlands Defence Materiel Organisation, Ministry of Defence said:
“During this test phase we will pre-qualify the active system against our threat specification, and together with our partners analyse system safety and prepare for its integration onto our CV9035NL vehicles.”

It is remarkable how far behind the west has become compared to Russia in terms of land warfare.

In what way is Russia ahead? Russia is way behind IMO.

i think you need to take a look at the Russians T-14 armata,it is way ahead of anything we in the west have,and before anyone bangs on about the british challenger the government have just halved the amount..we did not have many to start with now we have even less…

There’s a lot of hype about the T14 (and the S400, S500). Mostly generated by the Russians themselves. Even the Russians admit they cannot build them in any threatening quantity. There’s questions about their quality and the auto loading system. Even if the tank is anywhere near effective against other (NATO) tanks then the overriding question is how effective is it against a few Brimstones or other air delivered weapons; I think you know the answer is the tank will be at a major disadvantage. So provided the West maintains it massive air superiority over the Russians then the T14… Read more »

Does the west have air superiority? Russia has some pretty advanced SAM weaponry, which if effective in practice and not just on paper, would nullify any numerical numbers in air frames or fighter tech.

Compared to Russia, it seems NATO, and specifically Western Europe is lacking in SAM capability.

Russia / USSR has a long history of overstating its capability in terms of the technology used in its weapon systems.

However the west, and the Europeans in particular, have not been investing in there defence capability for over 20 years.

Every NATO armoured fighting vehicle should be equipped with active defence, as a basic requirement.

Its a hard call. For a moment forget the rest of NATO and focus on the UK. We have just got out of 2 wars where advanced tech got wiped the floor with, through low tech bombs etc. Until these wars our armored fighting vehicles were focused on direct attacks through conventional attacks, like a Russian armored attack. We had to spend huge in changing our vehicles to ones that could survive IED’s just like the US did. Considering the limited budget that most NATO members have, what war do you focus on, the low tech IED’s or the high… Read more »

Iraq 2003 and Helmand 2006, our politicians and military chiefs had no idea what they were getting involved. Low intensity warfare for which they totally unprepared in terms of training and equipment. After the body count became unacceptable then steps were taken to procure the right equipment for that of warfare. Some of this equipment is now being sold off at minimal prices, for example Warthog. The situation now is the UK armed forces are totally unprepared for high intensity warfare. If war did come I fear the consequences for the UK. For example we still use over 900 FV432/bulldog… Read more »

The whole war purchase program (can’t remember the name at the minute) is just silly. The MOD had a choice of dumping perfectly good gear or keeping it and then moving the purchase cost into their costs. Whether it is the treasury or the MOD that pays for the gear, it ultimately comes from the tax payer, the whole system is a joke. I suspect we are now not fully geared for fighting another low intensity war, because of the decision to dump gear to avoid the cost. To be realistic, we haven’t been a top end military nation for… Read more »

Can’t disagree with any of that.

I just wish people be honest about our lack of warfighting capability.

The UK is totally dependent on the USA, let’s hope Trump continues that support.

If Putin does cause trouble in eastern Europe I doubt the European nations of NATO would be able to cope .

Without the USA Europe is incapable not defending itself.

One can have both Steve!

Again, look to Russia.
Their vehicles in Syria are equipped with both the ‘Trophy / Shtora’ hard/soft kill systems for the high end stuff & IED jammers for the low-tech stuff.

Having both is no big deal!

I was one of the minions on the VC10 tanker program in the 90’s and I saw first hand the wastage when the MOD awards a contract to convert decrepit aircraft into flying service to a company which will ride the gravy train while threatening the government with redundancies if they don’t get a contract. I can see the same happening now with the Government pandering to the Clyde shipyards in order to keep them sweet. We can’t really blame the government too much here because most of it is in good faith but the likes of BAe etc. will… Read more »

Regarding the Russia threat; if we just look objectively at the statistics here, their air force is has some impressive fighters but they are non stealthy, close-in dog-fighting types which at leat on paper will be picked off by many of the later European or US fighters before the NATO aircraft are seen by the Russians. Their bomber force is a relic of the cold war and easy pickings for NATO. If Putin was stupid enough to attack NATO their sam systems are too slow to move forward with their attacking front line force and while they are moving they… Read more »

NATO currently lacks any stealth jets outside these provided by the US, and will do for another 10 years. Even then we do not know just how stealthy the f35’s really are, the PR talk may not match up with the reality, which wouldn’t be the first. Just look at the tech of the falkland wars, most of it didn’t work and was privately known not to work even though the PR was that it was world beating. Equally if the Russian PR is to be believed, then their S300 missile batteries can cover a range of over 200 miles,… Read more »

Regarding things not working.. I remember the hype surrounding the US Patriot system during the Gulf war and then finding out afterwards that its performance was poor at best. The S300 Steve range is only good against an A380, flaps and landing gear down towing a banner! 😉 The more stealthy the aircraft the shorter its detection range so the question begs ‘when does a S300 see the F35’? Looking around the net for an answer gives wildly different figures but I would like to bet its less than 50km which allows the release of a number of different weapon… Read more »

Military equipment testing seems highly flaky, the Patriot were terrible in Iraq war 1, as were Phalanx (HMS Exeter saved the day). During Falklands, Rapier turned out to be useless (in the end 1 confirmed kill due to lack of knowledge that it couldn’t target planes flying below a certain height caused by putting them on hill tops), the various naval missile systems all failed to various degrees and reasons and the sub hunting frigates failed to spot an out of date sub and let it attack. I don’t know how they test this gear, but i assume they knew… Read more »