The Council of the European Union has given the green light to the TWISTER missile defence capability project.

The project will see implementation within the EU’s Permanent Structured Cooperation (PESCO) framework.

The TWISTER (Timely Warning and Interception with Space-based TheatER surveillance international missile defence project, which already includes five European countries, seeks to develop with support from the European Defence Fund a European multi-role interceptor to address emerging threats and be brought into service by 2030. Describign the project, it’s website says:

TWISTER, uniting France, Finland, Italy, the Netherlands and Spain, promotes the EU’s “self-standing ability to contribute to NATO Ballistic-Missile Defence,” according to the Council of the European Union.

“The spectrum of threats on the European territory is evolving towards more complex and evolving air threats, notably in the missile domain. The project therefore aims at strengthening the ability of Europeans to better detect, track and counter these threats through a combination of enhanced capabilities for space-based early warning and endo atmospheric interceptors.”

“In addressing this capability gap, the interceptor component of the TWISTER project will ultimately become a key element in the contribution made by European countries to NATO’s territorial, population and armed forces defence mission while meeting the European Union’s level of ambition in the field of missile defence. By rationalising and pooling capabilities, the PESCO Member States will benefit from an operational capability in a class of its own and guarantee their strategic autonomy and freedom of action.

This new endo-atmospheric interceptor will address a wide range of threats including, manoeuvring ballistic missiles with intermediate ranges, hypersonic or high-supersonic cruise missiles, hypersonic gliders, and more conventional targets such as next-generation fighter aircraft. This Interceptor will integrate existing and future land and naval systems.”

MBDA say that it is committed to meeting this need through next generation technologies and architectures building on national and company funded studies which have been conducted over the past five years. MBDA will also draw on its experience of industrial cooperation at European level, its long heritage of leading complex air defence programmes and its solid industrial relationships across the wider European landscape to establish a skills and capability led team.

“MBDA enthusiastically welcomes the Council’s decision,” says MBDA CEO Éric Béranger, “and will commit all its energy and extensive missile defence experience in future collaborative and cross-border R&T and R&D activities. This next generation interceptor project provides a unique opportunity for Europeans to converge their efforts in the field of missile defence and to secure sovereignty in an area vital to their strategic autonomy. These high-end interceptors are technologically demanding and their development will represent a qualitative leap forward for Europe’s entire missile sector. Our industrial model as a European champion gives us the critical mass necessary to deliver this challenging project through cooperation with our European industrial partners.”

The TWISTER project is the second missile systems project to be supported under the new European defence agenda following the Beyond Line Of Sight (BLOS) capability programme which became part of PESCO in November 2018 and for which MBDA has put forward its 5th generation ground combat system.

There is a theory that a comprehensive ballistic shield could lead to a land war, sooner than if the ‘mutual destruction’ doctrine was allowed to remain unopposed?

Mark B
Reply to  maurice10

Is the Russian economy strong enough to maintain this attitude of taking on the rest of the world? If only their leadership could find a way out of this to reduce tension and focus efforts on resolving tensions elsewhere in the world. Am I dreaming again?

maurice10
Reply to  Mark B

Some far brainer people than I, believe that the Russian objective is to keep tabs on Western military developments and match them where possible? Does this mean war? If a concentrated effort is maintained by them, then the likelihood of localized clashes is increased. As we witnessed during the Cold War, physical barriers were created to mitigate surprise military action. However, the overriding constrainer was the ‘Bomb’ and mutual destruction. Russia under Putin will not hold back on military spending no matter the true cost, as he does not want to see his country compromised as seen in the 80’s… Read more »

It is still Russian military doctrine to use tactical nukes to make breeches in enemy defences, to allow armoured forces through unhindered. Whether they live long enough due to exposure isn’t a concern to the Russian hierarchy.

If you are a country like Germany who has the ability to use nukes. Would standby and let they country get nuked in a limited land war is question that is not easily answered, I suspect they would retaliate in kind!

We simply don’t know how countries would react to the limited use of small nukes. But the concept of launching a strike against a country’s civilians with brutal force, would affect the minds of that country. The fall of France is a good case in point, it was one of the World’s most powerful military forces. Sadly, poor intelligence and a failure to take a German invasion seriously, lead to an almighty meltdown of command. Deployment of small nukes on a capital city, would do something very similar to the infrastructure and public order.

No mention of the UK here-perhaps understandably. I remain genuinely conflicted by the whole sorry Brexit saga. Will we develop our own? Is this a portend of things to come with the UK excluded from future European defence projects so losing out on participation AND market share in Europe? Can we develop and find markets on our own to mitigate this? I merely pose the questions-we have to answer them without gung-ho and cerebrally-not as some of the more extreme elements of the Brexit party.

Last I checked MBDA was 37.5% BAE owner, with Airbus owning equivalent, and Leonardo the remainder. MBDA having 4 sites in the U.K. with the U.K. HQ in Stevenage. So EU funds going to a company that’s over 1/3 British, no problems there.

Thanks for the info Gents. Maybe I misread or misunderstood but it says above that France Finland Netherlands Italy and Spain are promoting the project via Twister so notwithstanding our share in MBDA it still leaves us at the back door?

Leonardo were looking recently to offload their part of MBDA. BAE were very keen…not sure whats happened with that. But it would have been interesting if BAE became the majority owner.

Not completely true, we did have Bloodhound which was primarily designed to protect against high flying bombers. But Bloodhound 2 had the capability to take out cruise missiles. To clarify, that’s 1960 to 1970 cruise missiles. It’s radar of the day was very capable at spotting and tracking small targets.

Geoff, You’ve hit the nail on the head. While we will probably rely on US imports France will become the dominant European military industrial force.

“dominant military industrial force within the EU; while it lasts”

Fixed it for you.

Most seem to prefer Russian to US at the moment because it comes without those pesky morals and the difficulty in getting high technology export deals through Congress. France has a 50% higher share of the international arms market than Britain. 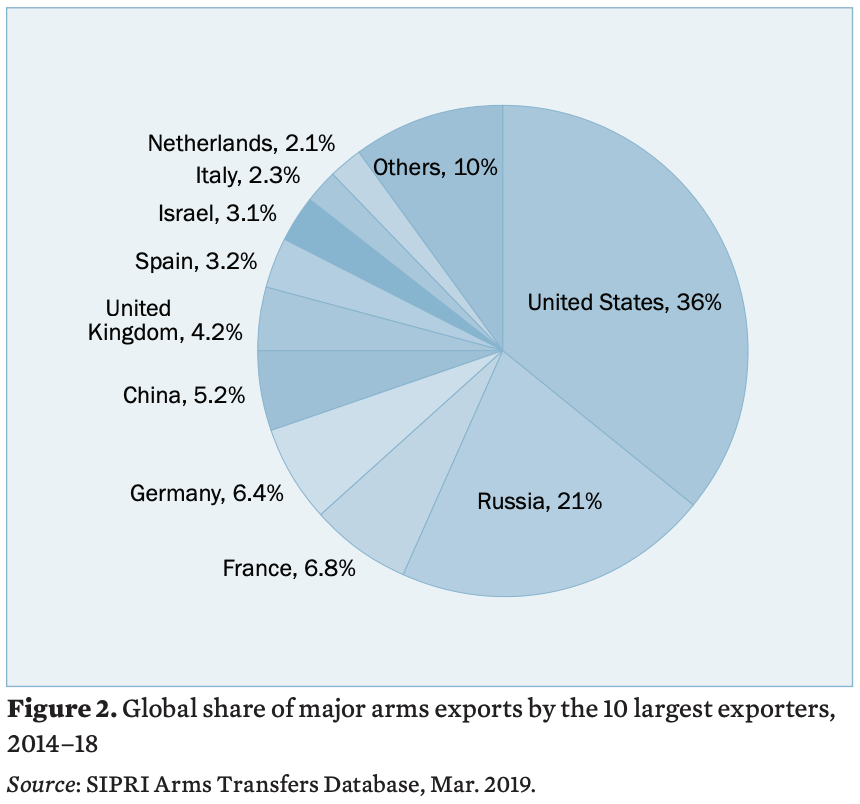 Interesting in various reports of military sales Uk has generally been announced as being in third place behind the US and Russia and well ahead of France though they have closed the gap. It was even even stated as such on the BBC earlier this year though it did note a large amount of that relies on the ongoing deals with Saudi Arabia. I guess it must rely upon what you exactly include in the term ‘Arms’ presumes.

Anglo-American cooperation includes a variety of projects concerning 5th Generation aersoace platform(s). This includes technical front line and surveillance systems, which outstrips and out performs any EU/Pan European project(s). From Trident to P8 Orion ac and everything in between, it is overwhelmingly an Anglo-American based cooperative theme… Despite Brexit. Wake up.

Those who disparage the concerns that UK is being dragged into an EU army and even deny that there is a plan to develop an EU military structure, supported by an EU Foreign Policy should check the FACTS. I advise them to read the following analysis :-
https://www.brugesgroup.com/blog/the-european-army

EU Military structure is something the UK itself has been lobbying for, just with themselves excluded from non-procurement aspects. NATO has also been pushing for more EU military co-ordination while at the same time being fearful of it eroding NATO influence.

Makes perfect sense especially considering the unreliable nature of our friends across the Atlantic especially in relation to recent events in Turkey which has a completely different view in Europe than it does in the US and of course as a NATO member makes a unified Nato response as good as impossible leaving Europe completely fragmented. Turkish boasts about reaching the Channel in a week in any conflict hardly calms the nerves as ridiculous as that may be. A degrees of unified European independent response seems totally sensible to me whatever Brexit holds for the overall relationship.

Turkey reaching the Channel in a week? Why would they want to do that?

We have a veto , Cant put it any simpler for you.

Jas, I will try and keep this SIMPLE for YOU. You are incorrect that the UK has a “veto”. Under the terms of the Treaty of Nice, policy decisions on “Funding for Common Foreign and Security Fund” and “Common Defence Policy” were governed by what the EU terms the principle of “Unaminity”, or what is commonly understood as the power of Veto. However under the Treaty of Lisbon 2008, the principle of “Unaminity” in these “Areas of Competence” was replaced by the principle of ” Qualified Majority Voting.” The introduction of QMV was applied on 1st Nov 2014. In short,… Read more »

Jas, I will try and keep this SIMPLE for YOU. You are incorrect that the UK has a “veto”. Under the terms of the Treaty of Nice, policy decisions on “Funding for Common Foreign and Security Fund” and “Common Defence Policy” were governed by what the EU terms the principle of “Unaminity”, or what is commonly understood as the power of Veto. However under the Treaty of Lisbon 2008, the principle of “Unaminity” in these “Areas of Competence” was replaced by the principle of ” Qualified Majority Voting.” The introduction of QMV was applied on 1st Nov 2014. In short,… Read more »

And deafening silence in response!

Somebody is paid good money to spend all day coming up with some top notch acronyms and names!