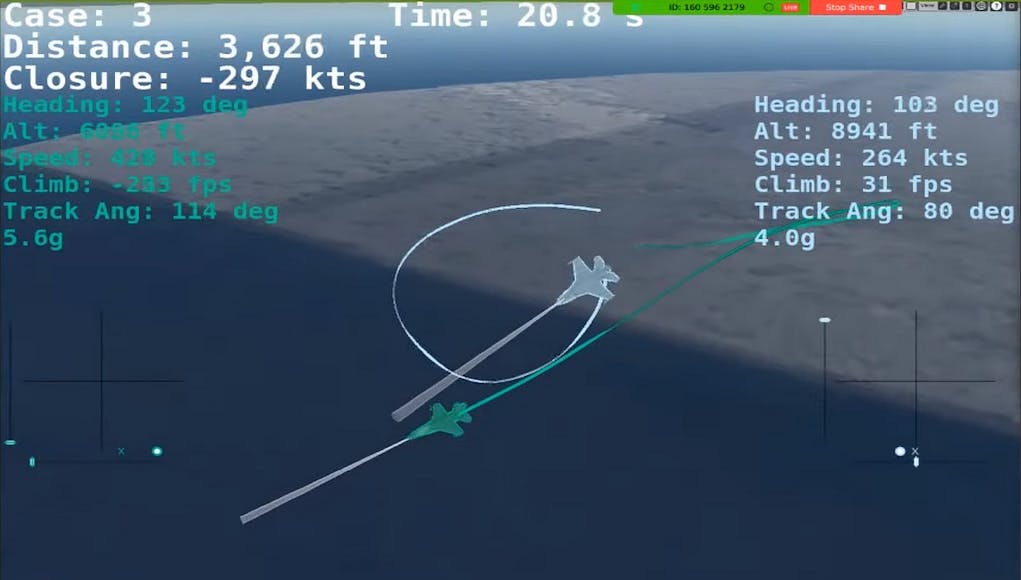 According to DARPA, Heron Systems’ F-16 AI agent defeated seven other companies’ F-16 AI agents and then went on to dominate the main event – a series of simulated dogfights against an experienced Air Force F-16 pilot – winning 5-0 through aggressive and precise maneuvers the human pilot couldn’t outmatch.

“The AlphaDogfight Trials were a phenomenal success, accomplishing exactly what we’d set out to do,” said US Air Force Col. Dan Javorsek, programme manager in DARPA’s Strategic Technology Office. “The goal was to earn the respect of a fighter pilot – and ultimately the broader fighter pilot community – by demonstrating that an AI agent can quickly and effectively learn basic fighter maneuvers and successfully employ them in a simulated dogfight.”

To watch the August 20th semifinals and final match of the AI-agent competition followed by the champion AI agent versus human fighter pilot, head to YouTube here. 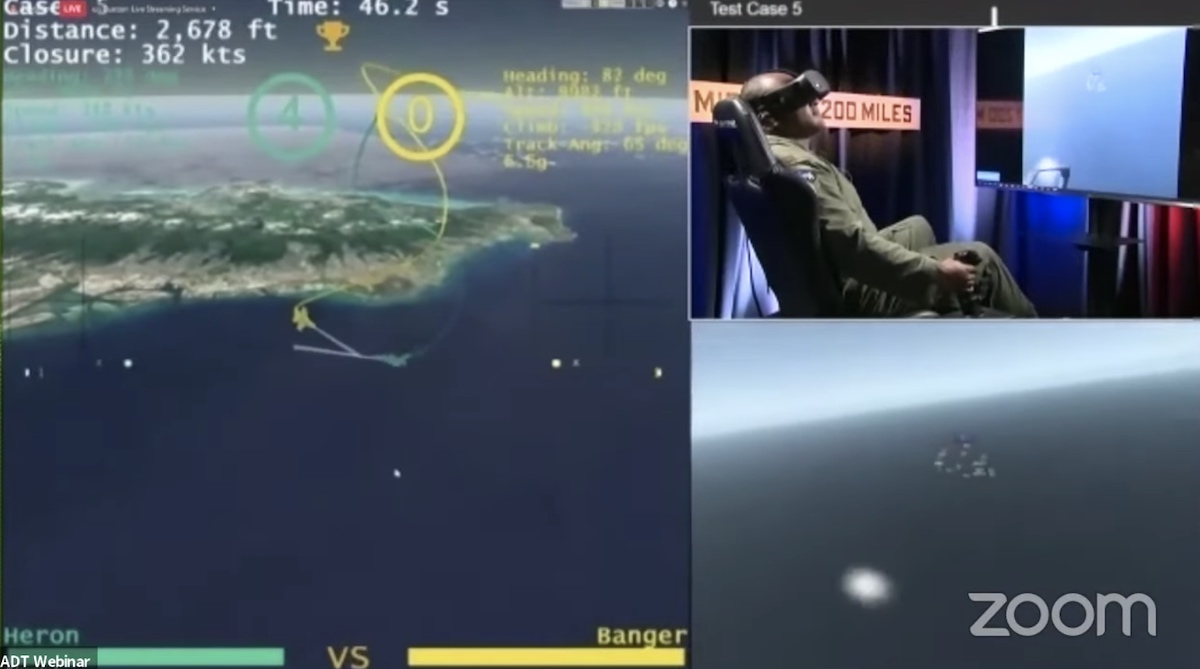 “This was a crucible that lets us now begin teaming humans with machines, which is at the heart of the ACE program where we hope to demonstrate a collaborative relationship with an AI agent handling tactical tasks like dogfighting while the onboard pilot focuses on higher-level strategy as a battle manager supervising multiple airborne platforms.”

“As part of STO’s Mosaic Warfare vision of distributed manned and unmanned systems, the trials laid a strong foundation for further algorithm development in the ACE program as it moves now from a simulation environment to testing algorithms and measuring pilot trust on actual aircraft.”

Drones are definitely the future, its reassuring good to see we are building this tech into Tempest.

Apologies for the typo!

Are we sure Tempest wouldn’t be better & cheaper if it was designed from the ground up to be pilot free?

Daveyb
Reply to  Mark B

Not at the moment. You have probably read the cost it has taken to get the Army’s Watchkeeper drone to initial operating capability (IOC). This is due to trying to integrate it within the civil controlled airspace network. Basically making sure it can detect and then move away from rather than crashing into a glider etc. Imagine how hard it will be to not do this but also integrate all the sensor so the ground based pilot has the right information to operate the jet in near real time. Thus is why it is best to do it in stages,… Read more »

The tech on Watchkeeper must be decades old. In the world of tech it is old hat after 6 months. We will find ourselves outpaced on the battlefield unless we can keep up. Adapt or die …

Daveyb
Reply to  Mark B

Ok, put it like this, Tesla have thrown millions into a autonomous self driving car and they still crash. Do you want an aircraft controlled by an AI to do the same?

Good point and that is absolutely true. Self-driving tech is in it’s infancy and in my opinion has a long long way to go. Ultimately, like everything it will never achieve perfection. I found this site https://www.tesladeaths.com/ which highlights the very point you make. What I found interesting was of the deaths investigated very few had the Autopilot switched on and the vast majority seem to suggest a third party was at fault. What we must also remember is that humans have been driving for over a hundred years and in the UK 5 people on average are killed daily… Read more »

spyintheskyuk
Reply to  Mark B

I think ‘third parties’ says everything we need to know about, at least for the foreseeable future, deciding to exclusively build an AI derived fighter aircraft from the off. In the Military in particular everything aiming to be technically advanced (especially in a fast developing market) is obsolete the moment (or certainly within a very short period) it enters service which always creates a problem as it will be for Tempest as to when to commit to what you want against if or when it can actually be achieved. Thats why so many much criticised and very expensive errors occur… Read more »

Nigel Collins
Reply to  Mark B

I think Loyal Wingman will fit this bill Mark B, With Tempest, you have the advantage of flying both manned and unmanned so it can be used in different configurations depending on the type of missions it will be assigned to carry out. QRA with the possibility of dogfighting would be better suited to unmanned as it will be able to sustain G rates higher than 9G I would have thought. Manned would be better suited for the delivery of munitions including the control of Loyal Wingmen. Just two possible examples of how it might be used in combat. No… Read more »

Nigel although I can see the political appeal of Tempest it still seems to have the all the shortcomings of both strategies. To me it makes about as much sense as a horse drawn tank. If the loyal wingman approach takes off then surely you can use an F35 or indeed any other decent aircraft to host the pilot. Cheaper drones could fight off any attack, deliver weapons and if necessary sacrifice themselves. Although I can see much of the work which is going into Tempest being used ultimately how confident are you that Tempest with materialise in its current… Read more »

Nigel Collins
Reply to  Mark B

We will need to replace Typhoon in the 2030s as an air superiority fighter and Tempest is being designed using open architecture to make it a multi-role aircraft.

Again, this is another example of just how long 6th gen fighters have been discussed.

F/A-XX is a development and acquisition program for a future sixth-generation air superiority fighter to complement and eventually replace the United States Navy’s F/A-18E/F Super Hornet beginning in the late 2020s.[1] A requirement was first identified in June 2008.”

Additional information can be gained by following this link.

I think that article makes in interesting point about where the American are at the moment. Their dominance is almost pushing them towards complacency.

Countries which have the funds but don’t need to worry about popular opinion might well take advantage?

Due to the capability gap caused by the ongoing issues and late arrival of the F35 (12yrs late and counting) clearly there are concerns in America about future projects, not least because of the spiralling costs associated with it. From a political standpoint, there is no way the US can cancel this project now due to the investment already made and the jobs it would lose across 54 states. “According to standard industry-accepted economic forecasting, the multirole 5th generation stealth fighter is responsible for more than 254,000 direct and indirect U.S. jobs. Equally impressive to the program’s job creation prowess… Read more »

Maybe a merge with the French/German project can’t be ruled out. I can’t see how Europe can afford 2 x 6th gen projects, manned or unmanned without eating up huge chunks of defence budgets. With so many other costly projects running at the same time, such as the Vanguard class replacements ect. Time will tell.

It looks almost like there may be a period of stagnation caused by political and economic reasons. In the short term this might well have little effect however in the medium to long term it might close the gap between the US and other Countries.

I would not be surprised if the UK took similar decisions. As always there tends to be clear daylight between the best course of action and the decision taken.

Yes, i agree. some people think a 6th gen is going to be flying and in service in 10 years time. I think that’s fantasy. And that’s putting it mildly.

The human body won’t be able to take Some of the manoeuvres future fighter jets Could make so it’s a good thing we are moving to unmanned, but the multipurpose manned or unmanned like say tempest, the fighter Surely would be more effective all of the time unmanned.

I think unmanned is the only way a 6th gen Tempest will be remotely affordable (no pun intended) 😄 We’ll see what happens over the coming years.

Totally agree. Future aircraft will be more like missile carriers which bring their unused warheads home. Not nearly as much fun but we must be realistic.

Could be quite tedious. Looking at missiles is interesting for the first ten minutes but then …. planes would probably be much the same.

They will lose something without pilots but if the opposition equip themselves with drones it would be like putting cavalry up against tanks.

“Never in the field of human conflict has so much be owed by so many to the microchip” could well be a future quote – hopefully in English!

Think I’ll get my visits in to RIAT in the next few years while it’s still representative of a normal airshow. Even today it’s nothing like the 90’s airshow circuit. How i miss a burger and a budweiser at 8 in the morning at Mildenhall 🤤

Robots waving flags from the stands.

That’s what taranis was supposed to be and then it appears to have been shelved. I think uavs work where the mission can be autonomous and pre programmed or the enemy is barely professional but uavs can still be jammed and blocked using electronic warfare. Satellites will likely be the first thing to be blown out of the sky on any peer on per conflict.

With no comms both the UAV and the pilot are in the same boat. Complete the mission and return home. The difference is the UAV will surely have the better chance. Projects which have a foot in both camps will surely be constrained by the restrictions of both strategies. No point in having the UAV capabilities if they are unworkable and if you are moving away from pilots because of their shortcomings why build that in. Perhaps taranis is the solution – we just need to solve the issues including those you have correctly raised. It is however the nature… Read more »

I thought Taranis was designed purely as a 6th Gen demonstrator to test future technologies that will be installed on Tempest-Loyal wingman?

No doubt a sovereign FCAS would have been on the drawing board long before we saw Taranis hit the skies.

Magma is another prime example of what we can expect to see included in the design of these programs.

How we engage future adversaries should be interesting, expect to see a fully operational version of Dragonfire before 20205!

Nobody thinking Skynet then?

Haha. I think we are a long way from machines becoming self-aware. There is a lot of hype about your average toaster having AI although mine was looking at me funny this morning …

Where they using actual F16s or just simulators. It is very impressive if the autonomous F16 did everything by itself without input from external sources for example did they track each other using awacs etc. Or was it in a simulated environment where the AI could process all of the situational data in real time.

Simulator, a real F16s Combat pilot Though against a small tech company’s AI

No doubt things have moved along since then. 2014

Where is Sarah Connor?

Waiting out the door of that little company .