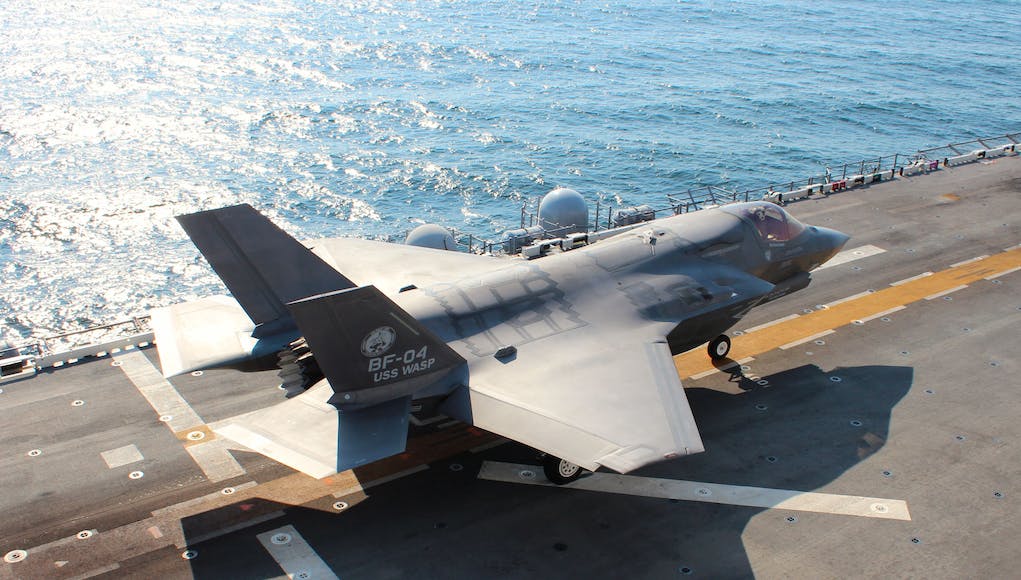 Wasp, which has undergone significant upgrades to be able to land and launch the F-35B, will replace USS Bonhomme Richard in the region.

“The arrival of USS Wasp represents an increase in military capability and a commitment to our partners and allies for security and stability in the region,” said Capt. Colby Howard, Wasp Commanding Officer.

“Paired with the F-35B Joint Strike Fighter, we remain ready to execute the full range of military operations from crisis response to disaster relief.”

The F-35B is scheduled to embark on Wasp when the amphibious assault ship and MEU deploy in 2018 for regularly scheduled regional patrol.

“It’s an exciting time to be in the Navy, and an exciting time for Wasp and her crew, given the wide variety of missions we have the opportunity to support,” said Wasp Command Master Chief Gregory Carlson in a release.

“Over the last 18 months, this crew has not only performing their daily duties in an exemplary manner, but grown as individuals and well-represented the U.S. as ambassadors as we have served across the globe. While I’m proud of what they have accomplished, I’m also very proud of who they’ve become as a crew.”

“Wasp, which has undergone significant upgrades to be able to land and launch the F-35B”

Note these are all the base packages. The USN and USMC mix and match from these more often than not.

So we could have had 40t CVAs carrying 24 F35s. Alongside would be a 40t Tide which could have been designed to carry 8 Wildcats and have a double pad. Escorting them could be 4 large escorts with 8 more. That would be a properly good air/sea control force. Substituting 8 F35s for Chinooks would still be good and provide LPH capacity. In fact the RFA have several large ships (Forts, Waves, Victoria, Points, Bays) which could all be the same so we could have had 16 ships with fuel tanks or stores or vehicles and 4 more slightly stretched… Read more »

Tim, still could. I think the UK was right to go for the QEs, and for a few years will be doint the T26 as escorts, and the T31e for GP or even as part of a XSG, finishing the Astute build, then build up along the lines you’res suggesting.

I hope that’s the plan anyway.

Thanks Elliott, that’s great. Very impressive. I’m presuming also that the F35-B could land on the Nimitzes, and it seems to me that over the years the F35-B could outsell the other variants, which would happily reduce unit costs.

The Wasp class are arguably what the UK should have built if the plan all along was to use a small fleet of F35’s. It also has some V22’s and a helicopter package.

All pretty sensational really – pity it costs a fortune..

A UKDJ article about the QEC carriers’ size.

I agree totally. Its what the Navy really required x2. Less of these behemoth floating targets Admiral’s vanity projects.

The key seems to be that the large deck of the QEC’s is that aircraft can be refuelled and rearmed much more quickly than on a smaller deck. So even the same number of aircraft can achieve a higher sortie rate from a big deck. I am sure this was part of the calculations for the design and size of our new carriers from the start.

Yes, and I have a feeling they could work WITH RFAs or LDAs, to use the extra carrying capacity of a longer takeoff and the ramp for full load. Quick ferry across to the QEs, refuel full and arm full load and off into the wild blue yonder.

Gents I am not suggesting that the QEC’s are not good – they are amazing. But for what the UK is able to put out there 4 Wasp class Amphibious vessels (with all the great tech in the QEC incorporated) would probably serve us better given we will not even have enough aircraft to fill one QEC (70 F35’bs per carrier). These are twice the size of the invincible class, have enough room for 2200 marines (blimey) and their kit and can have 16 F35b’s (when we are looking at sailing around with 12 on our massive super carrier). Sorry… Read more »

pacman27 – Ref your comment about we should have had 4 x Wasp type ships. The USA has now switched to the ‘America Class’ and the first ships will not have Welldecks as the last of the ‘Wasp Class’ didn’t. But even without that @ $3.5 Bn a piece that would be a cost of $14 Bn or £10 Bn for what would be larger HMS Ocean ships. We built two much larger assets for £7 Bn. I still hold the view that we do not have the financial muscle to go down the US route of duplicated assets for… Read more »

How would you crew 4 Wasp class? We are struggling to find 1500 bodies for the 2 carriers and each Wasp class needs over 1200 crew. Also there would have been no cost savings over the CVF programme so no money for V-22. The Queen Elizabeth class are superior to the Wasps in every regard and are exactly what we need. They can carry as many F-35B as we will have available plus a host of helicopters, up to 50 aircraft in surge conditions as you yourself have pointed out previously. The Wasp can’t do that. What then is the… Read more »

I also think that now we have them – we need to have 144 frontline F35’s so we can run both carriers with a standing force of 32 F35’bs on them and surge to 64 per carrier if need be. But understand this won’t happen.. and there in itself is my point – these things should always be 60%+ full to ensure they have the right operational tempo (otherwise its the equivalent of sending a Div 2 footballer to the premiership at an hours notice) – It might work, but it more than likely won’t when you need to scale… Read more »

Can I just remind the QE knocking crew that the USS Wasp is nearly 30 years old (and cost some $3 Bn in today’s money) and while the US is excellent at keeping things going for years we should remember its limitations and purpose: No ramp = Lower take off weight and reduced firepower No SRVL – Lower landing weights and wasted munitions Hover landings = Reduced flight deck operational flexibility Small deckspace = slower initial sortie and retrieval rates It is an excellent LHD designed specifically for amphibious landing support. However we do not need a flat top Albion… Read more »

dadsarmy – I was discussing the limitations of operating F-35s off the USS Wasp. If you have to make a slow approach to Port and then make a sideways hover and land the weight that can be returned to the ship is greatly reduced compared to SRVL. It was the problem with Harriers – Greater take off weight off the ramp but fuel and weapons had to be dumped (wasted) if they were not used on a mission to allow a hover landing. And to operate SRVL safely you need a larger flight deck than Wasp has to offer

I get you. It’d be interesting to see the numbers, but I daresay they’re a little confidential 🙂

Like thr thinking on the Albions but we are not going to get 2 additional and larger ones. Might get 2 Karel Doorman style JSS as part of the FSS project though.

Chris – I am not knocking the QEC – I love them, but I do think its a valid point that if we can’t fill them why build them to sail around 2/3 empty. We are bemoaning the fact we are losing Ocean and potentially other assets and this class seem to fit into our budget, strategy and capability (if as I have stated we did the same tech/design job on our version as we have with the QEC’s) I also make reference to the huge cost of these and the fact they have been replaced by America class. I… Read more »

HMS Prince of Wales, following modifications, might be seen as similar in role to USS America rather than Wasp.
But there is no point in making comparisons with the US, their defence spending is vast compared to any other nation by some magnitude.

The main difference between the Wasp and the QE is that her Marines don’t have to sleep on camp beds in the hanger!

Albion – And given the RMs attitude I suspect not one f**k will be given …. And I couldn’t possibly comment on the air conditioning and heating needs of the USMC

Sleeping on a camp bed! Oh the horror of war…

The principal of the wasp class is to provide air, logistics, transportation and medical support to to a Expeditionary Strike Group (ESG). This is because the USN came to the conclusion that amphibious warfare ships such as the San Antonio class or Albion class can not keep up with a Carrier Strike Group (CSG) when they are doing a emergency redeployment. The Burkes, Ticos, Nimitz and Ford classes were designed to be able to make a high speed crossing of the Pacific if needed at 30 knots, then refuel in theater at say Yokosuka NB for instance. This however meant… Read more »

The QE’s are amazing ships, but are fundamentally crippled by the lack of enough f35s. No point having such big ships without adequate jets and relying on the US is not a sensible solution, as we are not here to top up the US defence budget up.

Something like the wasps would have made a lot more sense. Replaced the Albion without much in the way of extra sailors and yet big capability jump over them.

Better to have 2 QEs with an initial capability of 24 F35s increasing year by year, with full load and fuel take-off and landing capabilty, than 2 half-size carriers with nowhere to put even 60 F35s, let alone 100 or more later on, and restricted in mission load weight.

Can’t agree with your logic here; we can only afford x F-35s so we should have built smaller flat tops? As I understand it the order for 138 F-35s is still the intention. Even a moderate cost reduction of number should still enable the UK to deploy a credible 1st day strike carrier capability, though we need not to get seduced by the F-35A mixed fleet argument. And our expeditionary capability is substantial and balanced if we retain the LPDs and the RM of course.