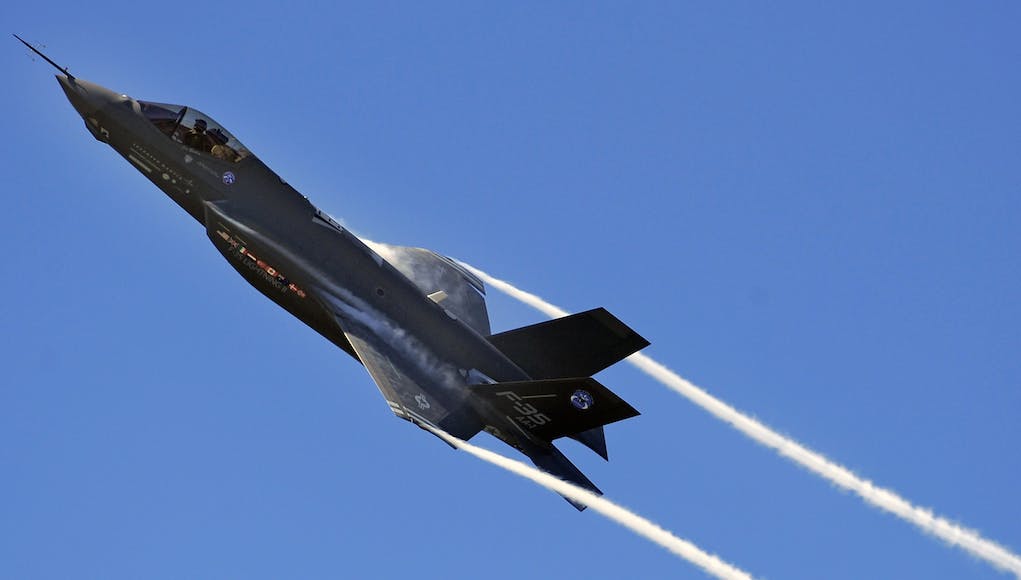 It has been widely reported that an issue with the F-35’s ejector seat means the jets can only be used by heavier pilots.

Weeks after several sources revealed that lightweight pilots were currently restricted from flying the F-35, the US Air Force officially acknowledged an increased risk of neck damage during ejection. It also acknowledged an “elevated level of risk” for pilots between 136 and 165 pounds.

In an answer in parliament, Minister of State for Defence Procurement Philip Dunne said:

“A temporary weight restriction has been imposed for UK pilots, which does not constrain flight operations at this time. A range of design solutions are being developed and these are expected to be in place before the aircraft enters service in the UK.”

“There are no UK F-35 pilots affected by this issue and we do not anticipate any impact on national flying operations while this seat development issue is resolved. The safety of our personnel remains of paramount importance.”

“The F-35 program is still in its System Development and Demonstration phase and the aircraft’s safe escape design continues to develop and improve. All ejections from any fighter aircraft are risky and place extreme amounts of stress upon the body. The F-35 escape system was designed to reduce ejection stresses and be able to accommodate the widest range of both aircrew weight and anthropometry (sizes), providing for the safe escape for pilots weighing from 103 to 245 lbs. The designed safe escape range is greater than legacy fighter ejection seats.

During tests to qualify safe escape with a Generation III helmet for lightweight pilots at low speed ejections, data indicated the potential for increased risk of injury under those conditions. On Aug. 27, 2015, the U.S. Services restricted F-35 pilots weighing less than 136 pounds from operating the aircraft. Currently, no F-35 pilots are impacted by this restriction.

All safe escape risks will be reduced and restrictions will be removed after three proposed fixes are complete: installing a switch on the seat for lightweight pilots that will slightly delay parachute deployment and lessen parachute opening forces; designing a lighter helmet; and mounting a head support panel, which is a fabric panel sewn between the parachute risers which will protect the pilot’s head from moving backwards during the parachute opening.

The head support panel and the ejection seat sequencer switch for lighter weight aircrew members are currently being tested as part of the seat qualification which is planned to be completed in October 2016. It is expected that modification kits to retrofit seats currently in operation will be available by November 2016 for F-35 fleet implementation.

Testing will also support the design and certification of a lighter version of the Gen III helmet and allow the program office to begin production of these helmets with initial deliveries scheduled to begin in October 2017. At that time, the services will be able to implement all three parts of the complete solution to lift the weight restriction for pilots less than 136 pounds and mitigate neck injury risks for all F-35 pilots.”

This issue is expected to be resolved.

So not because if you need to use the ejector seat then you are pretty screwed anyway?

Can’t wait to see these at RIAT this year.

Can’t wait to see this beast

No RAF pilots are affected. Because they are all well fed! 😉

Why can’t the lightweight pilots just put some lead in their boots?

The joke just keeps getting better, all obese pilots should apply, lol