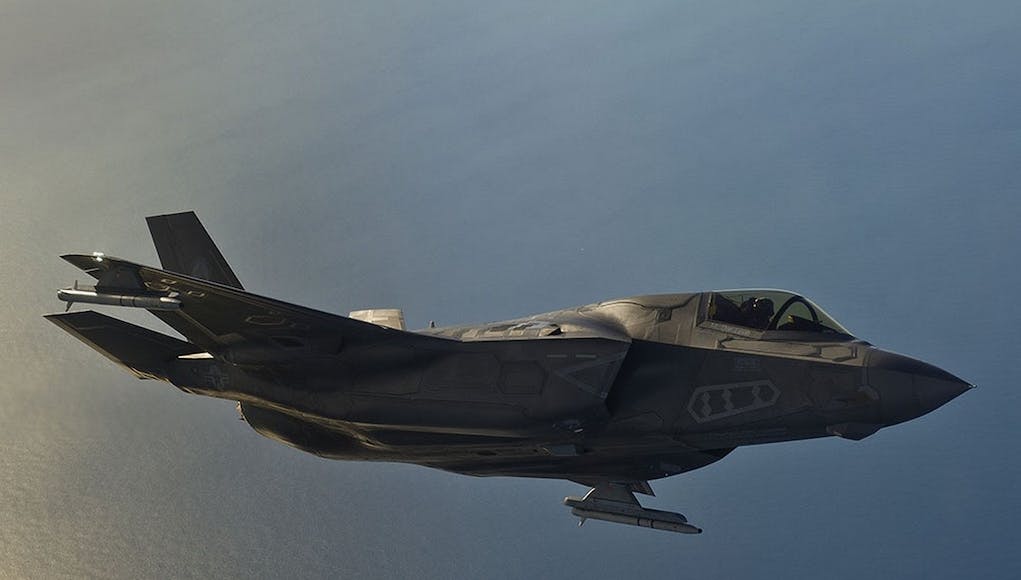 The F-35A is expected to cost $85 million, less than any fourth-generation fighter ‘in the 2019-2020 timeframe’ with the other two F-35 variants also reducing significantly in price.

The programme often comes under fire as the most expensive weapon programme in history and has been much criticised inside and outside government, in the US and partner countries. Critics argue that the plane is too expensive to operate, many blaming the procurement process. Critics also contend that the high sunk costs and political momentum make it “too big to kill”.

In 2014, the US Government Accountability Office found that the F-35 fleet would have operating costs ‘79% higher than the aircraft it was to replace’. In 2014, the FY2015 Selected Acquisition Report stated that the program cost had increased 43% from 2001, with Program Acquisition Unit Cost up 68% and Unit Recurring Flyaway up 41%.

In December 2015, the Selected Acquisition Report had revised the F-35A’s cost per flying hour down to $29,806 in comparison with the F-16C/D’s antecedent of $25,541. This was reportedly the result of a decrease in the assumed cost per gallon of JP-8 fuel, a decrease in the fuel burn rate for the F-35A variant and a revised cost estimating relationship for hardware modifications.

Jeff Babione, Lockheed Martin’s programme manager for the F-35, told reporters that the cost of the F-35A will drop to about $85 million by 2019, something also reiterated in a recent statement regarding price-concerns raised by US president-elect Donald Trump.

This is understood to be thanks to efficiencies and cost-cutting manufacturing technologies. The B and C variants are also steadily reducing in cost.

“We think that price with this capability will be unbeatable. You’ll be able to afford a fifth-generation airplane for what would be a fourth-generation price for anything else offered in the free world. The Lockheed/BAE/Northrop Grumman contractor team is hyper-focused on reducing the price of the airplane.”

As we reported at the start of last year, the F-35 programme is often labelled a “trillion-dollar black hole”, the man in charge of the project vehemently disagrees and lays to rest any fears over rising costs.

“It is a fact this program is over budget from 2001’s baseline. It’s just true. We will never underrun that number.

We will never save that money. It’s gone. What matters is since that time, what’s happened to the cost on the program? It’s gone down, not gone up. Judge the program today, not where it’s been, but where it is and where it’s going.”

The below figures also include engines and adjust for inflation and show a continued drop in price.

“Affordability is the number one priority for the F-35 program and this year’s report reflects another year with significant cost reductions and we’re not stopping there. We will continue to drive costs out of the program.

“We are extremely pleased with the nearly $60 billion decrease in Operations and Support costs of the F-35 program during the last year alone. This is a result of a laser focus by the entire government and contractor team on reducing costs across the board whether it’s improving quality in manufacturing, increasing supply chain delivery speed, and dramatically reducing concurrency items.

We aren’t stopping here, we have numerous initiatives in place, including the Blueprint for Affordability, that will drive program costs even lower allowing us to provide our warfighters a 5th Generation F-35 jet at a 4th Generation price by the end of the decade.”

US navy pays US$52m for a super hornet, not sure how any version of the F35 is going to be cheaper than the F18E/F.

I support the F35 program and it’s acquisition by the UK, but the above article reads like a press release from LM. Which is a shame as it undermines the case for the F35.

Bloke down the pub
Reply to  Mike Saull

+1 The headline doesn’t tally with the article.
At those differences in price for the models , I wonder how long before the government starts thinking about replacing the RAF’s B’s with A’s?

geoff
Reply to  Bloke down the pub

I always thought an A and B mix would be better for the UK but when the RN needs reinforcements in an emergency they have to be B’s unless the total purchase can be increased. Even a small number of F35 A would be nice though..

joe
Reply to  Bloke down the pub

The UK MOD certainly should (and I think will) purchase some ‘A’ variants at some point in the future.

Check your numbers there Mike.

The USN probably hasn’t paid $52m for a Shornet for a long time.
The meager 2017 acquisition for 2017 is $94m per unit & that excludes the two sensor pods & external fuel tanks needed for the thing to function.

What would be equivalent for the F35?

The F35 is going to cost more than any US built fourth generation jet, but less than a Typhoon would be appropriate.

In previous years, more were ordered….
For example, in 2015 the price for a batch of 7 Super Hornets only dropped to $79m each…

As for the above…. $4.5m for that engine seems way too cheap.

Looking at the little mentioned lot-10 contracts the ‘A’ version is now below $100m per unit and this (for the first time) includes the costs of concurrency modifications & engine.

I think foreign sales of the ‘A’ are a little higher….. but certainly the MOD should look to get some ‘A’s.
There is no better replacement for the Tornado out there.

Lower pound can only help. I suggest Bae and he government make a strong effort to get more F-35 business based on the UK’s lower prices.

Of course that would imply the UK actually buying more of the aircraft. The current total of under 10 bought and on order is a major embarrassment. Even Australia is buying them faster.

How does the lower pound help? It means the purchase price is higher not lower. The lower pound would help if we were building them and selling not the reverse.

Well written article however, your comparison of the F-35C to an F-18 Super Hornet Fighter says it all. First, the F-18 Super Hornet is a Air Superiority Fighter whereas the F-35 is not. Fleet defense is not a mission of the F-35. Second, some of the sensors used on the F-35 are for the deficiencies due to the lack of visibility such as cameras and other types for classification potential adversaries loaded in the onboard database; all very basic tools in todays fighter. If such information or database are not part of their software, why not? Is stealth that important?… Read more »