Home Air F-35 has generated £9.3bn in contracts for British suppliers to date 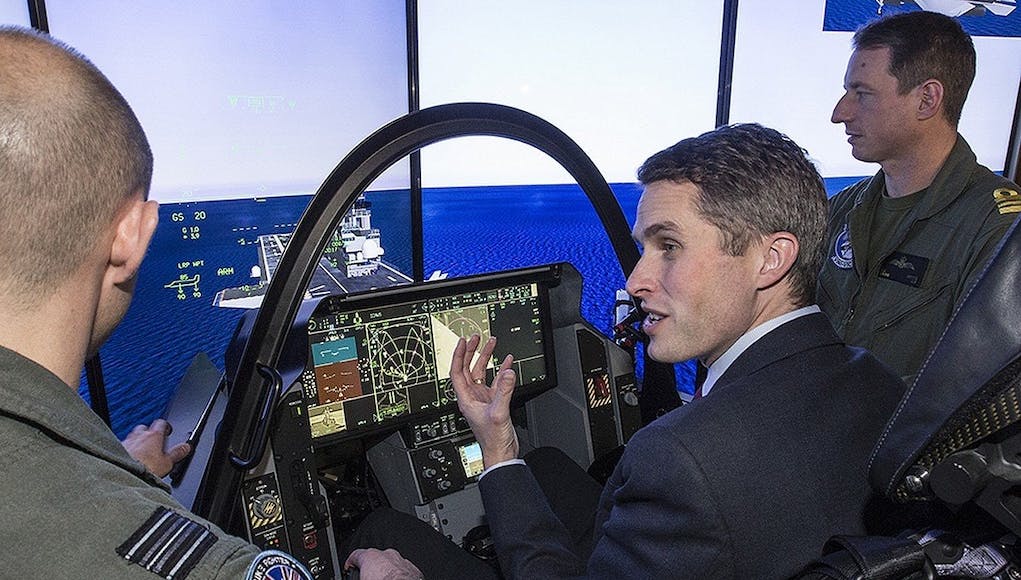 The industrial benefit to the UK of the F-35 was discussed when the Defence Secretary got to see what it is like to fly and land the jet in a simulator.

According to the MoD in a press release:

“The global F-35 programme will support 20,000 UK jobs over the 30 year production period and already the programme has generated over £9 billon for UK industry. The cockpit demonstrator gave the Defence Secretary a feel for flying the new state-of-the-art stealth aircraft, allowing him to practice landing and taking off from the new aircraft carrier HMS Queen Elizabeth.

The Defence Secretary was guided through the flight by Squadron Leader Andy Edgell and Lieutenant Commander Adam Hogg, two of the UK’s F-35 pilots putting the aircraft through its paces over in the United States. Alongside its short take-off and vertical landing capability, the F-35Bs unique combination of stealth, cutting-edge radar, sensor technology, and electronic warfare systems provide world-beating capability of a fifth-generation fighter.”

“Today demonstrates that we are investing in our brave Armed Forces by making sure they have the very best equipment, securing tens of thousands of British manufacturing and engineering jobs, and ensuring Britain will always play a leading role in making the world a safer place.

These pioneering stealth jets will protect British lives as we face intensifying and evolving threats at home and abroad.

The F-35 is the most advanced and dynamic fighter aircraft in our history, and will defend this country from terrorists, collect crucial intelligence, and safeguard our national interests from those who seek to do us harm.”

During his visit to the cockpit demonstrator, the Defence Secretary also met with representatives from some of the 500 UK companies who are in the F-35 supply chain. UK industry will provide approximately 15% of each F-35 to be built and, with more than 3,000 aircraft projected, the programme will support 20,000 UK jobs over the 30 year production phase say the MoD.

“To date, the F-35 programme has generated $12.9 billion (pounds figure) in contracts for British suppliers and that investment will grow as we ramp up towards full rate production. The F-35 will provide the UK Armed Forces with a game-changing capability that will allow the Royal Navy and Royal Air Force to project power around the world for decades to come.”

Operated jointly by the Royal Navy and Royal Air Force, the F-35 Lightning jets will fly from both land bases and the UK’s new aircraft carriers. The programme is on target to achieve Initial Operating Capability (IOC) by December 2018, meaning that UK F-35s will be able to operate from land bases from this point.

Worth every penny. The UKs investment in the F35 development has been paid back in full to the UKs economy.

Couldn’t agree more Ben. We have a major manufacturing facility in Lancashire which has already made several hundred aft fuselage sections as well as other mission critical systems for every single aircraft produced for the USA and all the nations in the programme . There is another facility in Wales which will be a global hub for the overhauling of F35 avionics and aircraft components. This is in addition to all the investment going to RAF Marham of course.
Thousands of jobs created directly and in the supply chain.

Yeah at the end of the day the money has to go somewhere. Hopefully more into the pockets of actual engineers that executives to offshore.

Yes. If the F35 is half as good as I suspect it is there will be more renenue where that came from. It is also an effective discount on every unit the UK buys.

Chris
Reply to  Mark B

Mark – I can’t find the source now but I did read that if 3,000 F-35s are built the UK will actually make more money than it will cost to buy 138 given the decrease in purchase costs as we get to later LRIP and then full production

Mark B
Reply to  Chris

Chris – the benefit of having allies armed with kit which both highlights excellent British technology and increases the deterent for any agressors is more difficult to quantify but should perhaps be taken into account. Assuming the F35 performs well history might well judge it to be a good financial and military investment. We will see.

Chris – I don’t think the numbers are that simple. The article doesn’t say it explicitly but from the wording I very, very strongly suspect that the aircraft built so far haven’t earned the UK government £9.3bn, in fact they haven’t even earned (as in “generated earnings of”) £9.3bn for UK contractors. What they have done is generate £9.3bn in revenue (not profit) for UK contractors and that might not even all be bookable revenue yet since in some cases it might include an up-front contract value for many years supply of certain components. Converting the £9.3bn figure into the… Read more »

I think the global total is planned to be 3500is the U.K. percentage contribution wa 7.5% our workshare is 15% plus component such as the lift fan on the model b. This doesn’t include training, after sales or weapons

Here is the proof that the F35B is worth every penny we have invested into the programme. The penny pinching mandarins in Whitehall need to get on and order at least another 48 F35Bs for the carrier programme and give them all to fleet air arm squadrons. Then a order for a small force of F35As if the RAF has to have some of these. Although I would much prefer an all F35B force. Far superior for resilience, training, spare parts etc to have just one type of the aircraft in the inventory. Also if situation with Russia does deteriorate… Read more »

“Has the RAF got an upto date UK air defence plan I wonder?” Undoubtedly yes, no doubt classified, and rightly so. “Including typhoon dispersal” RNAS Culdrose, MoD Boscombe Down and RAF Marham were all designated sites for dispersal in the event of a future 9/11 threat. 2 of those sites also have HAS for the aircraft, so yes. “Have we got SAMs for our air bases and CIWS to intercept cruise missiles? I beat the answer is no.” No. Bloodhound out of service by early 90’s I recall and the RAF Regiment no longer have Rapier to defend RAF Leuchars… Read more »

the problem with that statement is we should either gear for defending our nation for the worst case or if not we can massively cut down on heavy equipment and invest the money else where, since we don’t need it for modern warfare. if we are gearing for the worst case, land based air defence is essential. Any first strike style attack would no doubt start with the opponent lobbing cruise missiles at radar and air bases, to take out them out for long enough for their heavy bombers to fly in under air supremacy and finish off the air… Read more »

Now, the UK should be very wise and get in on the ground floor with the USA’s 6th gen PCA programme.

Absolutely Joe … That’s the future for the UK Defence Industry as a whole.

We must invest in and take part in US programs right out of the starting gate.

Its absolutely ridiculous that France and Germany are talking about developing a 6th generation fighter … with what money … Please god we keep out of that can of worms!

£9.3b, excellent news. Only another £190.7b to pay for the insane PFI outsource contracts which are maintaining schools, hospitals and defence assets over the next 20 years.