Home News Why the F-35 is an invaluable asset for the British armed forces... 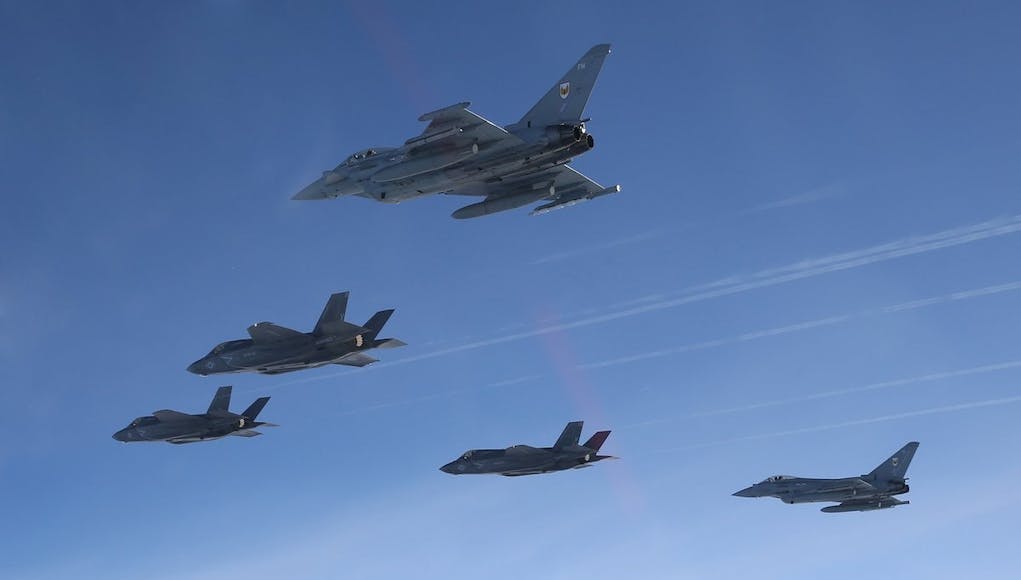 It’s no secret that British forces wouldn’t have been able to reach that goal without their partnership with the US Marine Corps.

In order to train to meet operational requirements, a decision was made many years ago to integrate the training of the USMC and RAF together. About 10 years ago the UK’s Royal Air Force and Royal Navy began discussions about combining efforts on initial F-35B training with the United States Marine Corps.

“It started out as just a conversation about, ‘Wouldn’t it be a good idea to pool our resources?

These discussions eventually resulted in a ‘pooling implementation agreement’ between the RAF, Royal Navy and USMC.

The ability of the F-35 to drastically improve the combat capability of other assets was demonstrated recently when an F-35B and Aegis Weapon System worked together during a live fire exercise, with the F-35 passing sensor data to another platform which then engaged the target.

The F-35B will drastically increase the situational awareness of the forces with which it will deploy and for the UK, where deployed numbers may be a concern, it represents a fantastic way to enhance combat capability in any coalition or national effort.

Will RN ships have MADL fitted? Or will the RN have to depend on an Aegis Baseline 9 ship rebroadcasting the data on Link 16?

It must do, otherwise how will it send its vast mission data files to/from ALIS?

Come to think of it, ALIS will be on board too, right?

I seriously cannot believe half our air force is going to be make up of jump jets with inferior range, payload and speed to any peer adversary they will face.

This is going to come back and bite us in the arse, calling it now.

4 Lightning squadrons with 6 or 7 Typhoon squadrons…. so, you are wrong there. Seeing as the Lightning-B has the a similar range and payload as the Tornado it replaces, you must be furious as of right now as well! Your complaint is pointless. Presumably you are talking about the Russian Air Force. Well, here’s the thing….. EVERY Western fighter in this class has less range and speed than the much larger Russian jets. Yet all is not what it seems Forget wiki specs….combat loaded the Su-27 is not good. The SU-30 is about the same as Lightning & the… Read more »

Don’t forget that the SU35 and Mig 29 series are cold war designed. They don’t have inherent stealth. They have lots of 90 degree angles and significant panel gaps. They also have straight through engine inlets with unshielded compressor fans. This makes them a lot easier to identify on radar at a much greater range. The PAK FA (SU57) is a much different beast as it was designed to go up against the F22. However, it has proved very difficult to change a 5th generation prototype aircraft into a production ready aircraft. Both the F35 and Typhoon will have a… Read more »

“Jump Jets” i.e the Harrier were largely responsible for winning the Falklands War despite having lower range payload and speed than their Mirage opponents. The F35 B has roughly double plus all of the capabilities of the Harrier including stealth and the most sophisticated cockpit in the world not to mention the unique flexibility given by VSTOL so Lewis, your fears are unfounded

Hi Geoff, Joe STOVL operations provide great flexibility, albeit with a performance penalty. Perhaps the point which Lewis was alluding to earlier is that the F-35 version which the UK has chosen, in comparison with other variants in the F-35 family, is somewhat deficient in performance. On that basis, as the UK will probably still fly the majority of operational combat jet sorties from air-bases (not aircraft-carriers), a dual buy of F-35B and F-35A might be merited. I’m a huge fan of the Sea Harrier FRS1, but it wasn’t a wonder weapon – limited range for carrier operations – sometimes… Read more »

The Harrier was indeed a good system, but it was a system that wouldn’t have been used if other planes were available, being subsonic and only finding itself being a valuable element because the enemy fighters had to enter their area to fire on the ships. I’m afraid that the issue of the F-35 is one where I’m always going to find myself at odds with the community bar a few. I definitely see the merit on saving money via getting similar systems and recognise that the savings are quite large, but seeing as it’s the exact same reasoning that… Read more »

The number’s will always be an issue … But a potential enemy in a SU27 variant in 2025 will be at a serious disadvantage to the block 4 F35B. The F35 will see the Flanker as it comes over the horizon with the radar signature of a flying office block! A firing solution will be worked by the F35’s frequency agile and difficult to detect Radar and the poor Flanker pilot will be well within Meteors lethal envelope before he even knows he has company…. His radar warning systems will light up a few seconds before impact, giving him little… Read more »

In all fairness even with the limited numbers the F35B / Typhoon mix combined with the advanced Meteor missiles will make the RAF by far the most capable European air force.

Better read DOT&E FY2016 and FY2017, then conduct a reassessment of this text.

The UK has made an excellent choice. I am French and pissed off that we still have to buy the inferior rafale instead of F-35. This crap is not stealthy and will never be.

Of my text??? I am talking 2025, block4 with superior European weapons?

It should come as no surprise that an aircraft as technically complex as the F35 has teething problems.

I have heard from a couple of old friends that Jeremy Corbyn still has plans to Cut back the Armed Services, Since Theresa May has Cut back many of the UK`s Forces 2 years ago…He pointed out that since Theresa May had announced that Lawyers working for the Irish Government in connection with the IRA about what Happened in Northern Ireland and Ireland during the Troubles…Many former Soldiers who worked for the British Army have been Dragged back by the Government to Testify in open Court about what Happened during this Terrible times…Many of these former British Army soldiers are… Read more »