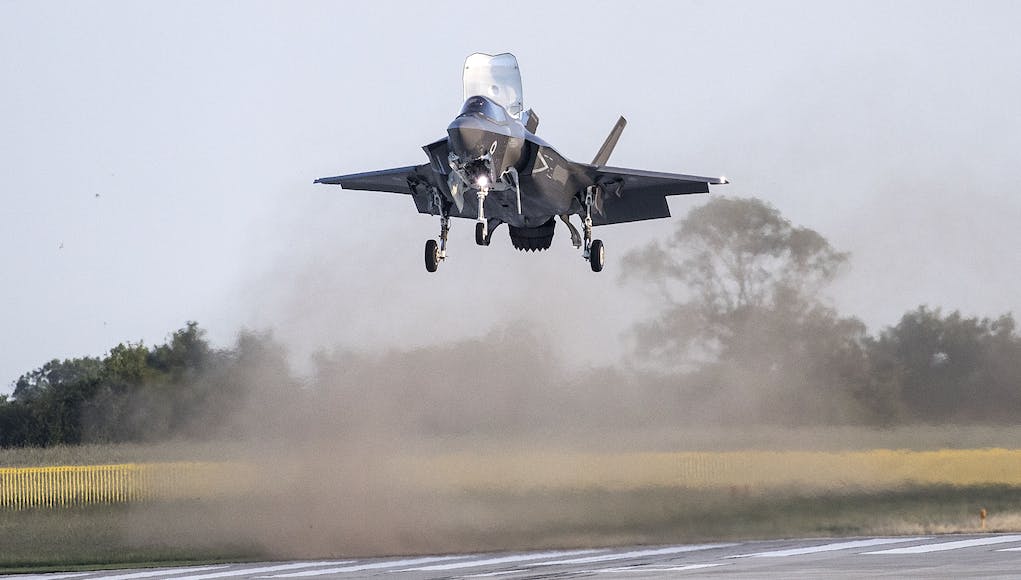 A new facility making unique vertical lift technology for the F-35 has been opened by Defence Minister Stuart Andrew.

The ‘LiftWorks’ facility, which has opened at Rolls-Royce in Bristol, makes the ‘LiftSystem’ to provide F-35 fighter jets with a fan propulsion system that allows them to take off over short distances, hover, swivel mid-air and land vertically.

According to the Government, the site will support more than 100 jobs in the area after more than £20 million was injected into transforming the former Defence Manufacturing building into an advanced facility dedicated to developing the unique technology.

“As we build up to the iconic first F-35 take-offs from our brand-new aircraft carrier, it is timely to open this Bristol site which is making it all possible. The incredibly powerful systems made at this high-tech facility mean our jets will be able to operate from British sovereign territory anywhere across the world’s seas to fight any adversaries which threaten us. The F-35 programme is the biggest in the history of defence and is supporting a hundred jobs here at LiftWorks – as well as thousands more right across the country.”

The Bristol site is not only making the LiftFan for UK jets, but for all F-35B jets on order across the world. Production at the site has been building up since 2009, with the official opening now marking the fact that the facility is heading towards peak manufacturing levels.

British companies are building 15% by value of all 3,000 F-35s planned for production. It is projected that around £35 billion will be contributed to the UK economy through the programme, with around 25,000 British jobs also being supported.

“The STOVL system on the UK’s F-35B Lightning II fleet has been performing exceptionally well for the Lightning Force.  We saw this earlier this Summer when F-35s used the Vertical Landing Pads at RAF Marham for the first time.  The opening of the new LiftWorks facility at Rolls-Royce promises even greater enhancements to this pioneering technology.”

“Rolls-Royce has pioneered STOVL technology through our development of the Pegasus engine for the Harrier and has now taken that capability to new levels in the shape of the LiftSystem for the F-35B. This new facility enables us to continue produce cutting edge technology to our customer while also ensuring that we are reducing their costs.”

It would be nice to see the F35 engine facility currently in Turkey land in British hands.

And no reason it shouldn’t, but perhaps in order for us to secure that we need to place a firm order in the first 2 main production lot for 24 F35B’s and then 8 per annum thereafter for the UK to show our commitment.

It is worrying. It should have come here. I wonder how much F35 tech will be finding its way to China through that facility…….

Erdogans Turks are also palley with Russia. His regime is disturbingly authoritarian & paranoid.

This is good news for the UK, we need more of this. More news, take a look at the BAE ‘Black Night’ Challenger 2 LEP. You can find the images on the net.

The future of tank warfare is upon us maurice10!
https://en.wikipedia.org/wiki/Black_Knight_(vehicle)

‘Black Night’ back for a second time Nigel?

From a picture of the prototype that looks like an Israeli iron fist APS . I wonder if that choice is due to BAE being selected to fit Iron Fist onto Dutch APCs.

Folks, I’m a little puzzled as to why this site hasn’t featured the ‘Black Night’ pictures? Am I correct in thinking there is another proposal from GD, or is this it? Looking at the picture I’m interested in the bolted front turret side panel….is it for applied up armour or additional device fit? One other point, is that a smooth bore or the current barrel as it’s wearing the old and trusted thermals?

Maurice- the competing company is Rheinmetall,not sure if their version has been made public yet.

Paul T, I’ve just seen photographs of the Rheinmetall LEP and it’s much more extensive than BAE’s. To be honest, it looks like a brand new design. Go on the net and search images.

just a question because i genuinely don’t know the answer, but we used to have around 400 challenger 2s didn’t we, i know due to cuts that has been reduced to the current level but what happened to the 100+ challenger 2s that were withdrawn from service?, im assuming they were just stripped for parts but i could be wrong

Exactly dean, this is the very question I asked a few weeks back, but no response? I would guess that many of the 100 or so are cannibalised but the hulls and turrets should still be extant, as I’ve never seen photographic evidence of CH2’s in the scrap yard?

Did most of them not go into deep storage?

Maurice – if you had re-read the original thread you would see my response.

(Chris H) – I understand that of the 408 delivered we have 3 regiments @ 56 each in service = 168. I presume the 59 training versions have been similarly reduced in number. Whatever the number is (286?) they are all in climate controlled storage and could be reinstated in very short order.

Send a FOIA request to the MOD.

Or check out DSDC Ashchurch. They might be there.

Dean- as I put in the Challenger 2 upgrade thread,the British Army received 386 C2’s plus 22 training Tanks,a further 38 were exported to the Army of Oman.After the 2003 Iraq war someone made the decision to put a third of the Tank fleet through the equivalent of the Tornado RTP process – call that scrapping if you will.

The F-35 program is still well behind schedule and suffering from a large number of faults that they dont seem very keen on fixing.
https://warisboring.com/f-35-program-still-cutting-corners-to-complete-development/

Will it be able to make an uprated liftfan to match the upgraded engine 2.0 proposal?

Where have they been so far? In the same place but just on a smaller scale?

I assume you mean “where have they been built so far”. If yes then I think the answer is actually in the article… “Production at the site has been building up since 2009, with the official opening now marking the fact that the facility is heading towards peak manufacturing levels.” It’s great that we have the worldwide lift fan production and that Rolls Royce has the world-class design expertise to create it in the first place but this particular development, an opening of a site that’s already been in operation for 9 years, seems pretty ridiculous to me. Is it… Read more »

For the record, my criticism was aimed at HMG/MoD for presumably issuing the press release in the first place and not at UKDF for reporting it. It is reasonable to report on what defence ministers are doing on a day to day basis even if it does seem to me on this occasion to be cynical news-manipulation operations – that in itself is information worth knowing.