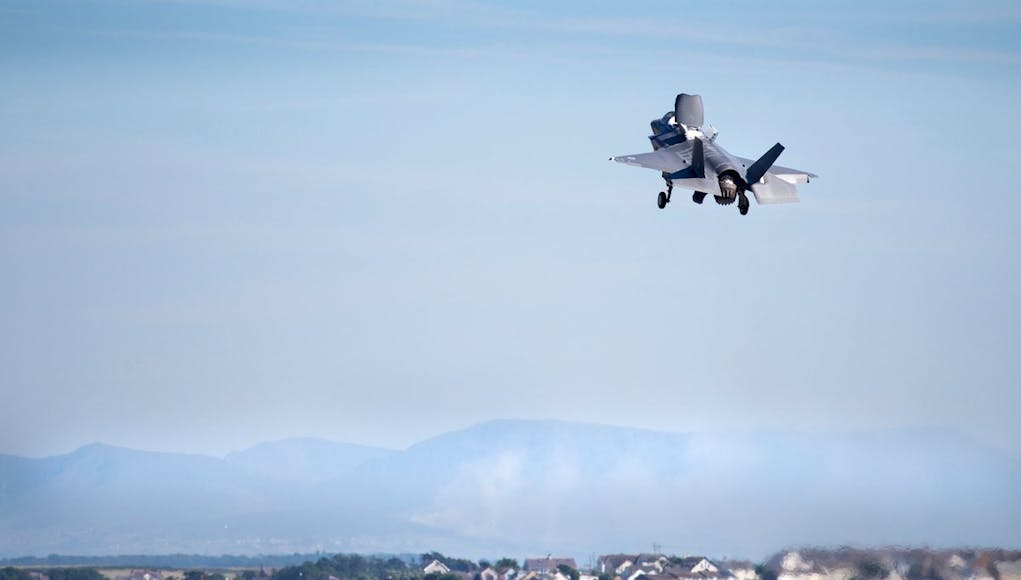 The future of Royal Air Force and Royal Navy air power, the F-35, has visited the home of UK advanced fighter pilot training.

The 617 Squadron aircraft flew an F-35B to Valley from RAF Marham to RAF Valley for the first time. Lightning Force Commander Air Commodore David Bradshaw said when 617 was recently reformed:

“This is a most momentous day for the UK Lightning Force as we celebrate the reformation of 617 Squadron. Manned by highly capable Royal Air Force and Royal Navy personnel and equipped with the truly remarkable F-35B Lightning, 617 Squadron will once again provide potent, flexible Air Power for the nation.

In a simple yet highly significant ceremony held in the heart of Washington DC amongst friends and colleagues as part of celebrations for RAF100, the famous Dambusters marked the start of another exciting chapter in their Squadron’s proud history. I very much look forward to welcoming 617 Squadron home to RAF Marham this summer as they prepare for operational service from land and sea.”

Today’s 617 Squadron, currently training with the UK’s F-35B Lightning jets, moved to the UK with a number of aircraft to their new home at RAF Marham this Summer. Like their predecessors they will be operating at the forefront of aircraft technology. The aircraft will be jointly operated by the Royal Air Force and the Royal Navy and have the ability to operate from land and sea, forming an integral part of Carrier Strike operating from the Queen Elizabeth Class aircraft carriers.

The 15th F-35B for the UK, ZM149, recently flew from Lockheed Martin’s Fort Worth facility for a test flight. Numbers right now are exactly where they’re expected to be and inline with the 2015 Strategic Defence and Security Review.

As the only level one partner on the F-35 programme, the UK has been working closely with the US from the outset. UK industry will provide approximately 15% by value of each F-35 to be built, which are due to total more than 3000 in number. The programme has already generated $12.9Bn worth of orders for the UK and at peak production the programme will support over 24,000 jobs in the UK.

Run up to jets on-board

Yep – that is a bit strange, I thought an F-35 would have piloted by, say, a pilot, not an aircraft.
Also, I would have thought he would have just gone from RAF Marham, to RAF Valley and been done with it.

Might the comment about not needing fully instrumented aircraft be interpreted as the QE bringing a few of her own? That would be a sight!

Excellent article and relevant to this subject.

Interesting article thanks. The author didn’t really make the case that a carriers role is narrowing as expressed in the title but the points on lack of innovation and creative thinking resonate with me together with a perception of complacency that what has worked in the past will continue in the future. If we take no other lesson away from Iraq it should be that adversaries who cannot match us, in whatever field of defence, will pursue asymmetric solutions and a failure to anticipate and develop counters will be at our peril as ground troops in Iraq found to their… Read more »

Frank62
Reply to  Glass Half Full

That’s why I think the QEs are badly under armed. The USN carriers all have medium ranged ESSM sams, short ranged RAM sams & Phalanx CIWS. The QEs have only the Phalanx, the miniguns & 30mm are innefective v ASMs & Phalanx may not stop even the missiles it hits before big chunks strike the ship. We should consider fitting Aster 15 &/or SeaCeptor to take out most at safer ranges. The spin says the escorts will deal with them, but in reality carriers are sometimes caught without sufficient escorts & should be equipped for that. Spin has zero effect… Read more »