British and American F-35Bs have been ‘hot rearmed and refuelled’ onboard HMS Queen Elizabeth in the Pacific.

Partnering for a #FreeAndOpenIndoPacific 🇺🇸 🇬🇧

Marine Fighter Attack Squadron 211 arm and launch an active F-35B Lightning II aboard @HMSQNLZ. #VMFA211 is attached to UKCSG 21 and operating in the @US7thFleet area of operations. #NavyPartnerships

The U.S. say that U.S.  Marines with Marine Fighter Attack Squadron 211 have been arming active F-35Bs aboard HMS Queen Elizabeth in the Indo-Pacific on August 05, 2021.

“A historical first for HMS Queen Elizabeth, rearming and refueling active aircraft allows Marines to increase sortie generation, providing commanders increased options. This training underscores the unique advantages and opportunities which Carrier Strike Group 21 provides the US Marine Corps, US Navy, and Royal Navy and our commitment to shared security.” 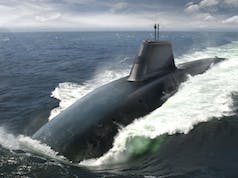 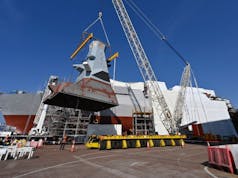 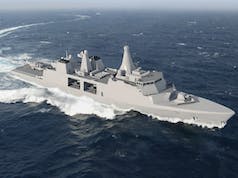 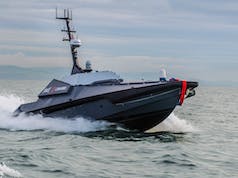 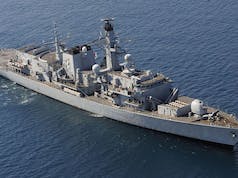 Excellent, good progress being made here. Let’s see if this totally innocuous comment is deleted too!

I’m sure someone will find it offensive….

Seriously, my post has awaiting approval above it now, hilarious…….

So I’m guessing (I probably know who it is too) that certain immature persons are just red flagging all my (and several others posts) and generally abusing the system.

Perhaps I should just start liberally red flagging too and join in the fun … Oh wait, I’m an adult, so perhaps not.

Hi John, I’m sorry that it appears some people are flagging comments unnecessarily. If a comment is flagged, it goes into ‘pending for approval’ for us to check. Comments are usually checked weekdays 9am – 5pm. If a comment is flagged, all of the replies to it are also removed pending approval by mods. It’s not ideal but rest assured your flagged comments will be approved eventually, unless they go against our comment moderation policy. If you have any queries or feedback, please feel free to e-mail me at [email protected] – thank you.

Very efficient way of quickly turning around a combat aircraft and sending it on it’s way again. Helps with reliability too. Not switching everything off/on again certainly helps keep things running sweetly. 👌

I’m beginning to wonder if QEC isn’t sent via Afghanistan on the way back to support the pull out.

They will need air cover and fast given how rapidly the place is falling apart.

It would seem a possibility, and would show exactly why you have to spend the money on these assets. Although tragic what is happen it would finally remove that last breath from the “White elephant” argument.

You want to check a map. To reach Afghanistan you would need flyover permission from either Iran or Pakistan.

Hi mate, its nearly 500 nm from the coast to Kabul, given the range limitations of F35Bs, unless Pakistan allows some basing, don’t think its a viable option!! Its over twice the distance from Oman/Dubai, so not much help out of there either!

Unless we get hold of an airfield, its a reliance on US long range bombing efforts I assume.

But we can have loitering tankers?

Yes mate, ours are all (most) in the UK. Suspect we would need 4-5 on continuous duty to support any significant surge in aircraft to provide CAS. This has the potential to turn into a disaster of epic proportions!! Hopefully deals will be done to get our people out, its the only viable option really, even if it does shread our reputation and standing!!

It would be interesting to see if we could sustain enough tankers in theatre to be useful….

Yes it certainly would. Alone we might gind it a bit of a strech, what have we got, 9 and another 5 if we surge them!
Shows the follie of not having this capability on the Atlas fleet – due I believe to the AT contract, another short sighted venture! At some point someone will finally realise, you cant do defence on the cheap. Sorry, rant done!

Totally agree with you.

It is a shame we have the right platforms but not the capability needed here for AAR across the fleet.

We seem to be testing our AAR for the big birds anyway.

Yes it does, not sure of the exact role the MRTT are playing, as they seem to be shuttling people back to Brize. Maybe 2 as tankers and 1-2 on shuttle run to UK, with C17, Atlas and herc lifting all out of Kabul!

Events are moving very quickly around Kabul today – id say any intervention by HMS QE would be too little too late.

It seemed a sensible thought when I posted it 24 hrs ago!

This question may have been covered previously, and if so, apologies. Would it be possible in an emergency to launch Typhoon from the carriers, even if in lightly loaded CAP configuration, as the PRC does with the J15 Flanker derivative? Just wondering whether this option has been explored.

I doubt it would do the undercarriage much good. But how would they land? The Chinese use STOBAR, not STOVL.

I know your question is about launching the Typhoons but I think the biggest issue is recovering them. Unless you had something else in mind.

Well I know that typhoon has a degree of STOL capability, and the L part is tested with parachute + hard braking. So I wonder whether this combined with maximising wind over deck (25knots into wind with the carrier) would bring the landing roll down to within deck length available. I did say “in emergency”!

Really not possible. It is the landing on in the first place, if nothing else:

1) The undercarriage isn’t designed for carrier landings which can be very hard indeed i.e. no flare out on landing and the flight deck can be moving upwards as well;
2) No arrester gear so no way of stopping before going off the end of the flight deck. The rear fuselage is not designed to take the loads of a big enough chute or a hook.

The Typhoon does have an arrestor hook, which is only used in emergencies. If the aircraft has a brake fire when landing or a flame out when accelerating down the runway. It will deploy the hook, as the parachute won’t stop it quickly enough. A fast jet airfield will have an arrestor wire system similar to the carrier’s. However, There is a fundamental difference. The carrier’s wire operates over a much shorter stroke to stop the aircraft quicker and in a much shorter distance. The airfield version operates a longer stroke, so slows the aircraft down over a longer distance.… Read more »

But the version of the EJ200 in RAF Typhoon does’t vector?

In fact I don’t think anyone has bought the vectored version?

No it doesn’t, but it’s there ready and waiting.

I had forgotten about the arrester hook, but the differences in retarding forces are such that the Typhoon still cannot land on a carrier without considerable modifications. Besides, no one has tried it…

Also, the original question pertained to the current fleet so the answer is basically, no it cannot operate from a carrier. It could if suitably modified, but you can say that about most fighters I would suggest.

I agree, landing a Typhoon on either of our carriers is not possible. It’s purely an academic reply, as that ship has sailed pardon the pun. In theory, if the Typhoon’s structure around the undercarriage and arrestor hook were beefed up. Then there’s a chance the aircraft could have been used. There would be other issues to resolve, but the main one would require a serious study of how and where the deceleration forces are shared through the airframe. For example if you beef up one frame, then the stresses are likely to be transferred and felt most in the… Read more »

This is truly ridiculous. An absolutely bland inoffensive comment by John Clark has disappeared presumably for adjudication. If this continues this site is not going to survive.

What did he say? Unless really bad it should have been left in. Censorship is the path to the totalitarian.

Hope they’re not taking a lesson from Twitter, Youtube, ect in banning people with opposing points of view. I canceled all my social media accounts last year because of that.

It was posted yesterday PM I can’t remember it was nothing anyone could be offended by I only replied because he finished with ‘Hope this isn’t flagged’ I joked that I was offended and laughing emoji. Logged on today and gone. It will be back up and you’ll see. But it’s getting serious now. PS i’m not blaming George. I’m blaming the ‘people’ getting others adjudicated.

Comments go into moderation if multiple people flag them, during that time they go invisible. Once George and team have had a chance to review them and are satisfied that they are in fact inoffensive, they get restored. It’s nothing to do with George or censorship, and everything to do with trolls serially flagging comments.

It’s either malice or infantile from people using this site but it’s getting worse. 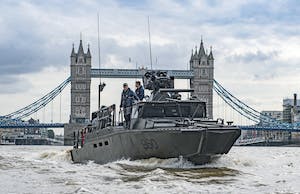 Saab ‘Next Generation Combat Boat’ on the Thames

Chief of the General Staff outlines vision for British Army

Union calls for military to ease pressure on NHS Scotland