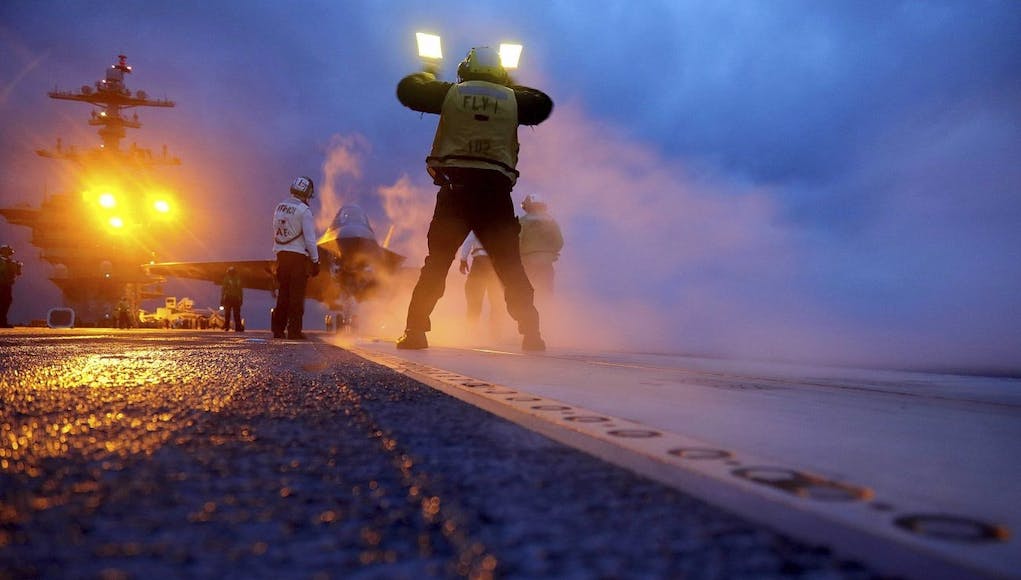 The Nimitz class aircraft carrier USS Abraham Lincoln became one of the few ships in the American fleet to trap and launch the F-35C this week.

The “Grim Reapers” of Strike Fighter Squadron 101, from Eglin Air Force Base, Florida, are the training squadron for the F-35C.

“The F-35C is still in a testing phase, so it is not fully operational yet,” said Lt. Cmdr. Chris Karapostoles, a pilot assigned to VFA 101. “We are the training squadron for the F-35C, so we are onboard this ship conducting our carrier qualification training, qualifying pilots, landing signal officers and maintenance crews.”

The launching and recovering of the F-35Cs presented an opportunity for the crew of Abraham Lincoln to work with a new aircraft and play a role in the development of this new fighter jet.

“Being part of the primary flight control team for the landing and launching of the F-35Cs was such a unique experience,” said Aviation Boatswain’s Mate (Handling) Airman Mariana Monima. “The F-35Cs are so amazing and powerful. I feel privileged to have been a part of this historic event.”

According to the F-35 Lightning II Pax River Integrated Test Force, the F-35C should reach its initial operational capacity in 2018.

“I love the F-35C,” said Karapostoles. “Compared to other jets it’s more powerful and really just a beast. Some of the controls are different, which can take a little bit of getting used to, but that’s what we have training like this for.”

According to the Joint Strike Fighter Fleet Integration Office, the F-35C will introduce next generation strike-fighter aircraft capabilities to the Navy Carrier Air Wings, enabling the Carrier Strike Groups and numbered fleets to effectively engage and survive a wide range of rapidly evolving threats.

“According to the F-35 Lightning II Pax River Integrated Test Force, the F-35C should reach its initial operational capacity in 2018.”
And I should lose ten pounds in 2018. . .but won’t.

Don, Don, Don…. It seems you are reduced to “snark”…. I guess that’s an admission you are out of stuff to Lie about.