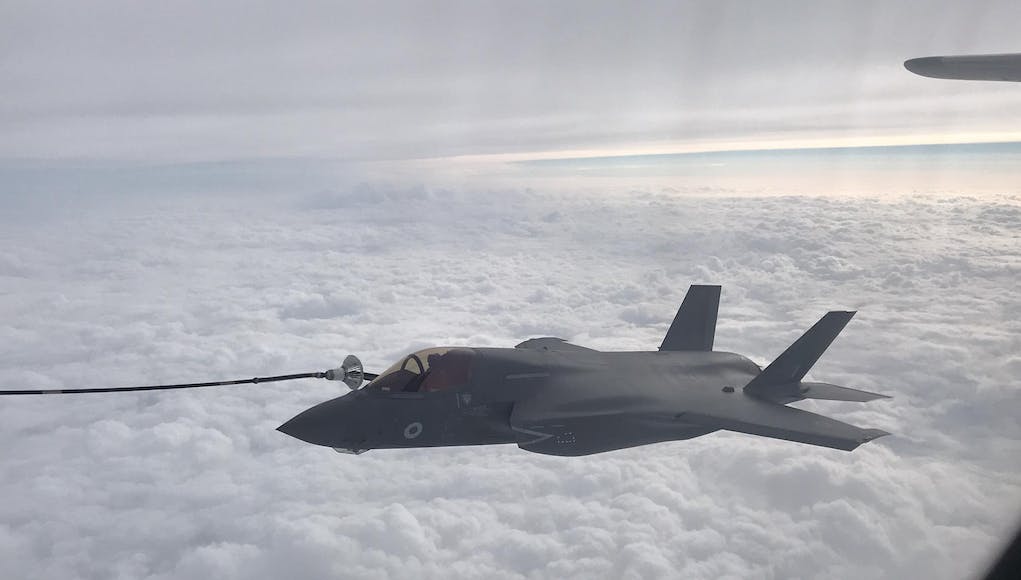 British Pilots currently training on the F-35B Lightning aircraft in MCAS Beaufort, South Carolina, have completed the first all British air to air refuelling sorties for the new stealth jets.

Flying off the east coast of the USA the pilots practised the manoeuvre of attaching to the RAF Voyager several times – including several times after night fell. This marks another significant milestone in bringing the stealth aircraft back to the UK later this summer say the MoD. 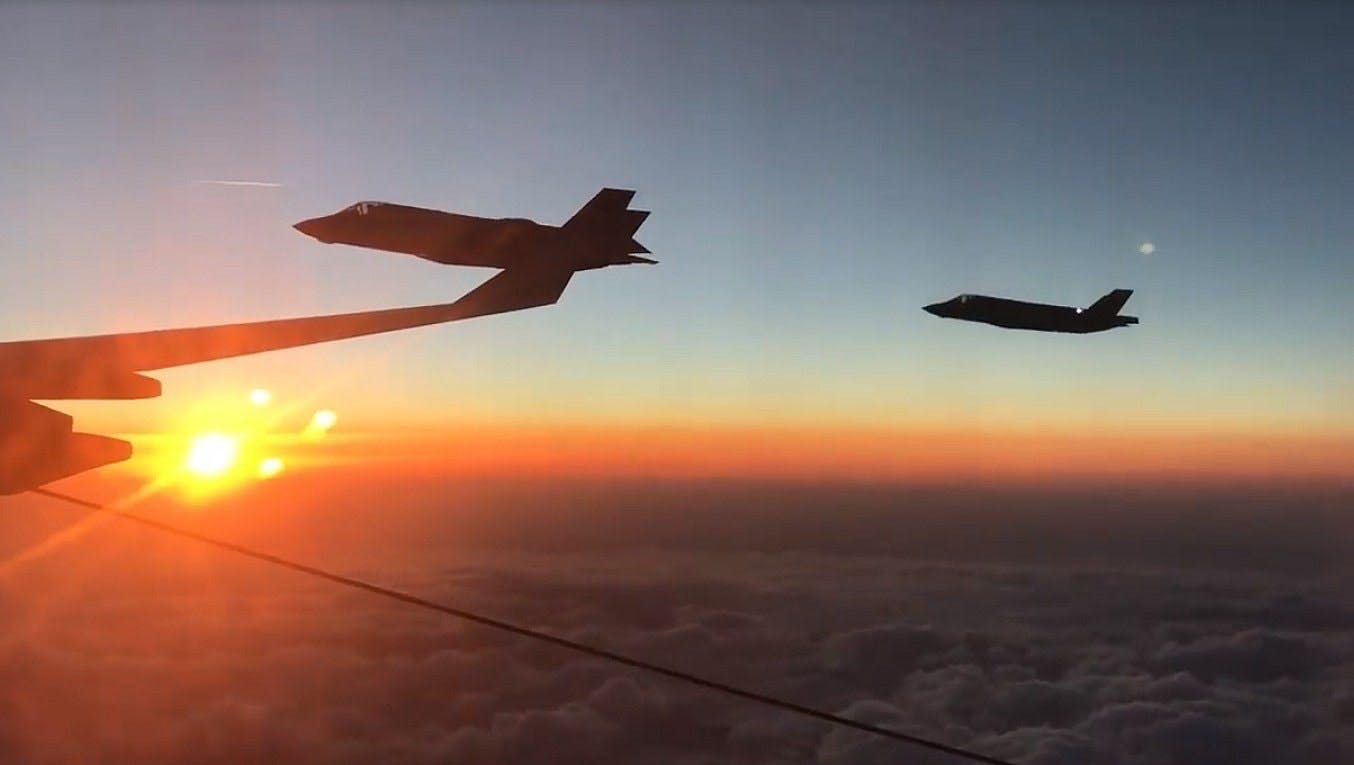 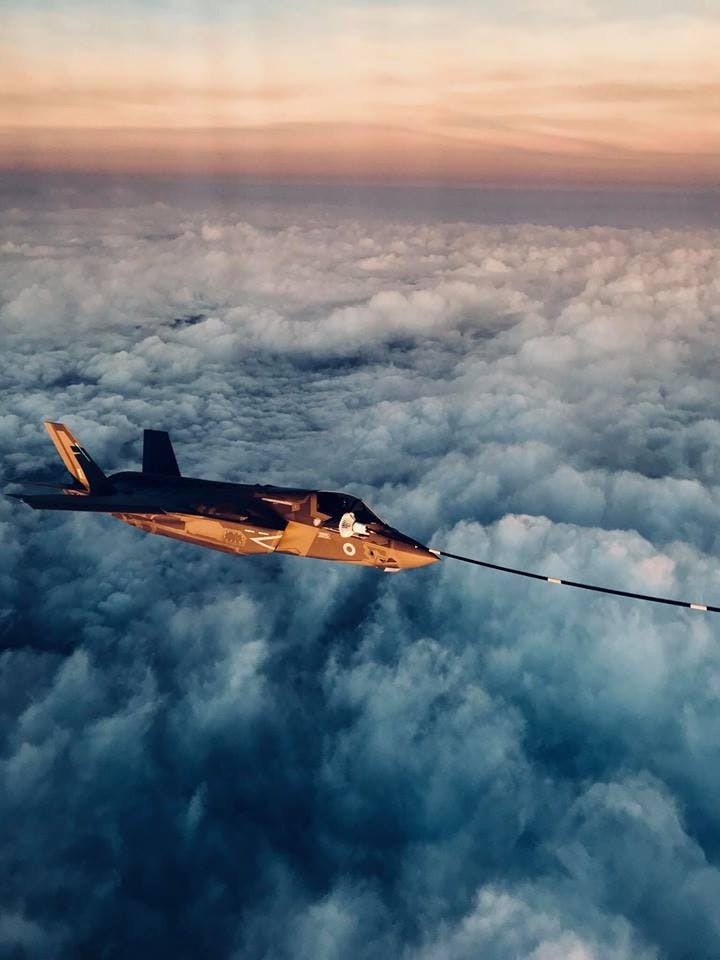 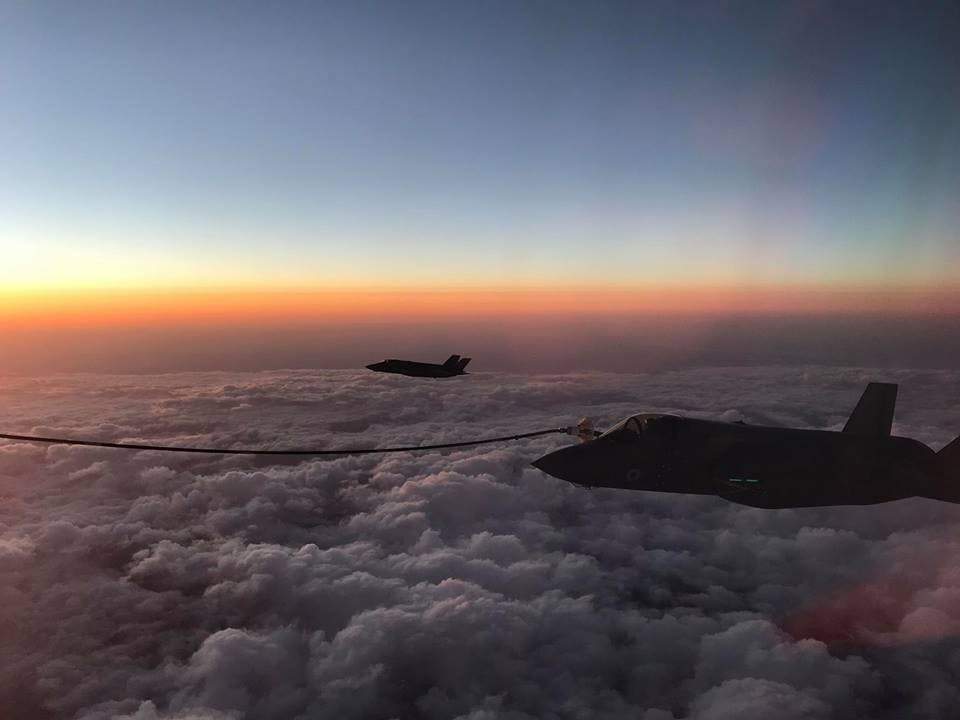 Cue the incoming tide of ‘but i thought they couldn’t fly’, ‘they won’t be able to fly off our carriers by 2020′, should have never retired the Harrier’ and ‘F 35C would have been better’ comments. In all seriousness though – beautiful aircraft that is going from strength to strength.

(Chris H) Jassy Spik – well not if we convert the 4 early LRIP test and development mules to tankers. They have the basic software, will never see combat and will be redundant as trainer aircraft next year. Two per carrier with everything stripped out and a tank in bomb bay (doors not needed). Two underwing pylons used for the drogues and reels.

We already own these assets that will be worthless and for a relatively low cost we could make them extremely useful bits of kit.

They are still having problems with the F35C’s So had we gone for that one we definitely would have none.. lol

We need the buddy system to give them longer range off the carrier where a voyager is not in range. Right now it is the only available option, until such time as the US gets the V22 being able to do the role.

in view of the ongoing issue on syria i wonder if a ‘snap’ SDSR COULD BE IN ORDER, AND HIGHLIGHT THE EMPTY SHELVES ON WHICH OUR FORCES ARE KEPT.

Looks promising.
The way thing are looking we might well need them sooner than 2020!

Great news.
The way things are looking we might well need them sooner than 2020!
Apologies for the grammar in the above post!!!
Being able to delete, or even better edit would be a useful function to add.

Stuff that, F35B landing on our Carrier!

That’s the one Daniele!

Absolutely, get your dirty aircraft off our nice clean landing deck. Look – an oil patch!

Oh right, you meant milestone. Oh well, that too.

It was mooted in this article from neraly a year ago, be interesting to know if anything’s happened in the way of research of design even.

All these milestones matter. We’re getting there. I do agree with Dadsarmy though, UK F-35B buddy refuelling would be a good one to see ticked off too. And yes, landing on our carrier will be the big one. Once that’s done the only other milestones left that I can think of that I long to see are… 1 – Rolling landing with max permitted load to prove and validate that capability 2 – Standing up a full squadron onboard 3 – Doing full capacity trials. That would presumably involve partnership with USMC to actually get enough F-35B to do that… Read more »

Have they been tested with the full set of UK land attack missiles?

I just want too here an official announcement by the Government and the MOD that the UK will purchace all 138 F35B’s needed..

See SDSR 2015, although I don’t have a lot of faith. Unfortunately that’s as good as it gets insofar as assurance on numbers is concerned.

Depends on the timescale. The F35 will likely be available for purchase for at lest the next 25 years. I can easily see the U.K. needing all 138 to keep 3 Squadrons and an OCU going for 35 plus years. Or we could quickly go to 6 squadrons and a big OCU and need all 138 quickly.

Hypothetical point/question(hopefully!): US/UK/Fr launch air & misslie strikes against Syria in response to Assads continued use of chemical weapons in the next week(though they may be fairly inneffective due to broadcasting that we would days before). Russia responds by launching conventional attacks on our armed forces & our few naval ships at sea. So how many would be needlessly vulnerable due to the stupid practice of “fitted for, but not equipped”? If the QE is at sea does she still has no CIWS & zero to defend against air or misile threats except chaff or flares. Are any AEW equipped… Read more »

luckily we are still a long way off Russia even considering a military attack. US lobs a few ineffective missiles at Syria and Russia will probably respond by stationing a few more military assets there and bombing a few American backed rebels and everyone will pat themselves on the back stating they have responded in kind.

If a nightmare situation happened, realistically we are hopelessly under prepared.

Hopoefully you’re right, there’s some pretty amateur stuff going on at the top.

I’m not sure it is as amateur as it looks. A lot of bluster but no instant reaction. I hate to say it, but Trumps postering around china appeared to work with getting North Korea semi in line.

p.s. we have also been down this road before, a year or so ago, a few missiles fired, to make it look like the west is reacting against the use of chemical weps and then no real follow through.

Fantastic to see the F35b programme really coming together along with the new carriers
We will soon see British fifth generation fighter aircraft flying from new British carriers.
Excellent.

Not that it matters but they have wonderful silhouettes :o)

Always need a bit of luck and we certainly got lucky with the carrier gap, but ‘ll take it.

That luck in running defence so ‘thin’ looks to be rapidly running out. F-35 looks to be very promising and I hope MDP ups procurement to 2023. We’ll see.

All the Russian pro Putin trolls said this plane would never fly . The Israeli air force say the flew right in and out of Russian air defence without being noticed !!

Having been a Director of AirTanker since the Contract was signed to just over a year ago (now retired) to read this makes me very proud. I know how difficult and challenging these trials are and all the problems that can arise before something is given a Release to Service. So congratulations all concerned and well done! A reminder to everyone that the carriers will always be constrained with having to operate within range of a friendly air base because they will never be deployed to a hostile theatre of operations without accompanying P-8s. So if you have P-8s you’ll… Read more »