The Royal Navy say in a release, the inert GBU-12 Paveway II laser guided precision bombs were dropped off the east coast of the USA. Adding the 500lb bombs to the jets for take-off has enabled the trials teams to see how the jets behave when carrying various weights, gathering crucial test data.

The jets onboard are two two F-35 test aircraft, belonging to the Integrated Test Force (ITF). The jets are expected to conduct 500 take offs and landings during their 11-week period at sea. “It is the first time the American-made bombs have ever been embarked in a UK ship. They are made up of a head, containing the bomb’s computer, the tail and a concrete warhead. As they are test bombs, they carry no explosives.

They are being built onboard by Royal Navy air engineers, supervised by specialist US Navy ordnance ratings from the US aircraft carrier USS Dwight D. Eisenhower, further demonstrating the close co-operation between the two key allied nations.” Commander Neil Mathieson, the head of the air engineering department on board HMS Queen Elizabeth, said:

“This marks a significant milestone for us. It makes me excited about operational trials next year with the UK’s F-35 Lightning squadrons when we will see live Paveways being dropped. These trials are an important pathway to that point.”

The highly mechanised weapons handling system aboard HMS Queen Elizabeth is perhaps one of the most complex systems aboard, moving palletised munitions around the vessel to connect the magazines, hangar and flight deck.

“The HMWHS is the first maritime application of shore-based commercial warehousing processes using automated systems with all-electric control, adapted for safe transport and stowage of munitions in a warship environment.

Munitions can be delivered, in bulk, to the point of use at rates that could not be achieved manually, whilst minimising the manpower requirement in what is traditionally a labour-intensive process, thus delivering reduced through-life cost, as well as a saving in onboard living accommodation requirements.” 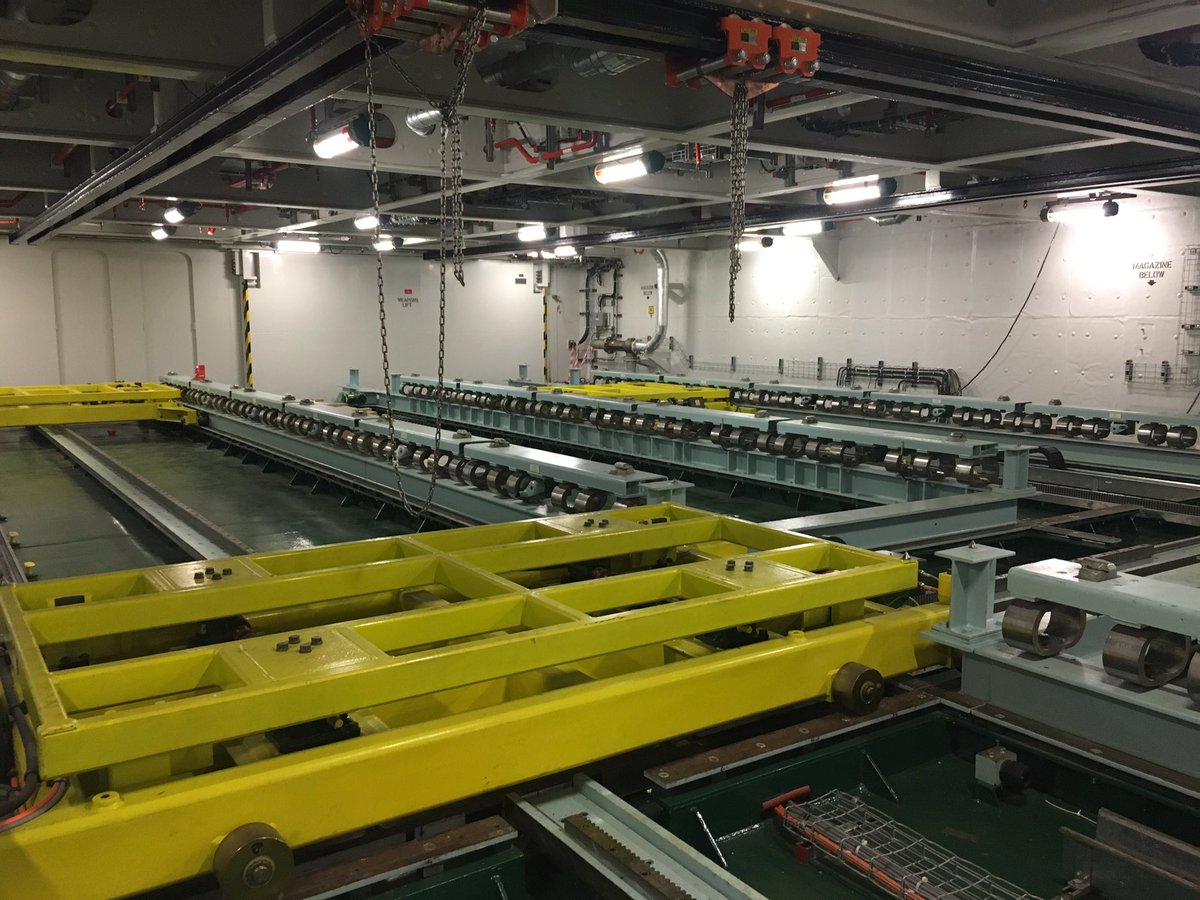 The HMWHS moves palletised munitions from the magazines and weapon preparation areas, along track ways and via several lifts, forward and aft or port and starboard.

HMS Queen Elizabeth left her home port of Portsmouth in August, crossing the Atlantic to conduct the flying trials as well as training with the US Navy. More than 1,400 sailors, flight crew and Royal Marines have been working on board the carrier during her deployment.

The deployment, known as ‘WESTLANT 18’, was the first-time HMS Queen Elizabeth sailed across the Atlantic. As well as the vital deck trials, the Royal Navy say it will also involve exercises to prove the ability to operate with other nations’ maritime and aviation assets, as well as the landing of Royal Marines and their equipment ashore in the United States, to conduct training with their US counterparts.

And if the HMWHS fails?

I trust back ups or ability to use traditional methods are in place?

I’d presume so, many times I took part in “Emergency Resupply of 4.5″, seawolf etc” on board frigates. I’d think QE would have a similar procedure in place?

Hand wheeling Seawolf along one deck and over the door frames or across the upper deck.
Block and tackles for 4.5…
I remember it well…

I used to run an automotive component assembly line which used what appears to be similar technology. Setup and alignment was a full time job and I can’t help but view every HMWHS article through this lense. If they’ve designed it right, it will be a step change but I suspect it’s one of the areas where operating experience will require many tweaks to it before it’s robust enough for regular duties. Battle damage is another matter.

“According to DellaVedova, the United Kingdom has not yet committed to purchasing the SDB II but is aware of the weapons bay issue. He said Italy would have also been informed.”

This issue has been fixed and will be fitted along with the software upgrade.

Can you show me the link that says the issue has been fixed Lee1 as I can’t seem to find it? Thank you in advance.

I thought that SDB 2 is to some extent a competitor to Spear 3 and that we are going with Spear 3 due for integration in block 4 I believe. If Spear 3 is still on track why would we put in any meaningful order for SDB 2 at least for the F-35Bs? Being powered I would also have thought that Spear 3 is the better option for our F-35Bs – given some concerns about combat radius a bit extra from the ordinance itself will be helpful.

That’s if we can afford it.

“Winter said development costs will be shared with U.S. allies, leaving the Department of Defense on the hook for $7.2 billion, Flight International reported March 8, meaning that partner nations will have to cough up an additional $3.8 billion.

“I can’t emphasize enough how important it is that we fully fund Block 4. We are at a crucial stage where we must commit to the developmental work to ensure we have these capabilities available to meet a 2025 need.”

“By 2023, the United Kingdom will have received 42 of the 48 short take-off and landing (STOVL) F-35Bs that it has so far committed to (the wider international programme will have seen 951 aircraft of all variants delivered during the same period). A decision to upgrade these UK aircraft to the newer DAS system will have to be made as part of a wider plan to bring them up to the latest Block 4/C2D2 standard.”