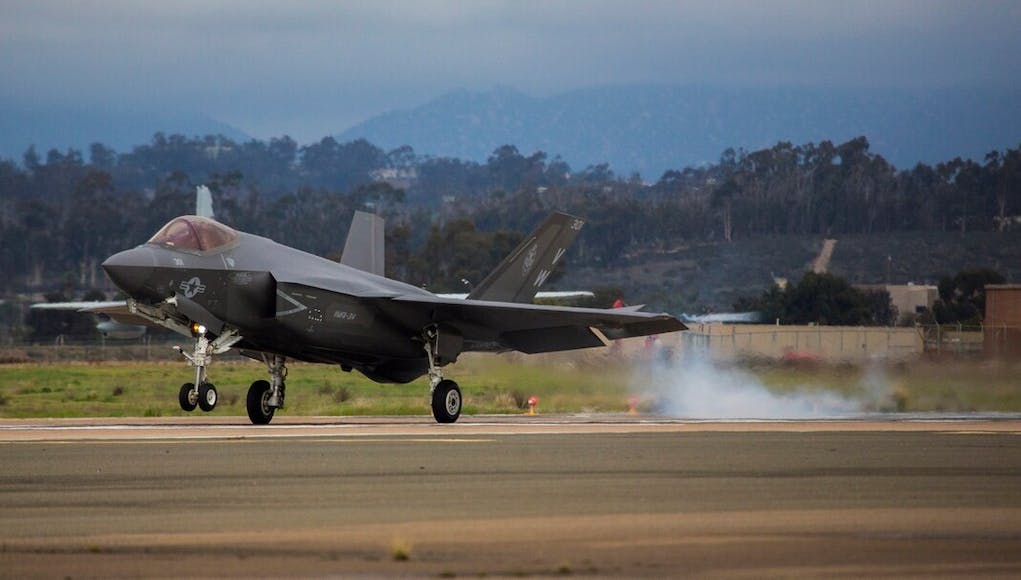 The service say that the Marines and sailors of Marine Fighter Attack Squadron (VMFA) 314, the ‘Black Knights’, are extremely proud of their legacy and tradition of making aviation history.

“It should be no surprise that VMFA-314 is once again leading the way into the next generation of fighter attack aircraft,” said Lt. Col Cedar Hinton, commanding officer of VMFA-314, in a news release.

The squadron’s history began with its commissioning in 1943 at MCAS Cherry Point, North Carolina, as the ‘Bob’s Cats.’ In 1952, they were the first squadron in 3rd MAW to transition to jet aircraft and fly the F-9F Panther. In 1957, they officially became the ‘Black Knights’ with the arrival of the F-4D Skyray. In October 1961, the ‘Black Knights’ were the first Marine Corps squadron to transition to the F-4B Phantom and in 1982, the first in the Department of the Navy to fly the F/A-18 Hornet.

The F-35C is one of three F-35 variants and was designed to operate from an aircraft carrier and is the first 5th generation long-range stealth strike fighter jet designed for that mission. The F-35Cs control surfaces and landing gear are better equipped for carrier operation than the other variants.

Some additional information can be found via the attached link.

Thanks for the interesting usni link Nigel, especially the quote: ‘That balance of models still heavily favors the F-35B that will operate from amphibious assault ships, but Rudder said the commonality between the B and C will give the service flexibility to move pilots and maintainers between B and C squadrons and will reduce the training and maintenance burden. ‘“What that means is, for our small 18 squadrons … we’ll be able to mix pilots back and forth between the B and C; one simulator. One maintainer, one supply account. And that creates efficiency for us,” Rudder said. “For us… Read more »

I’m happy for an A/B split as long as it doesn’t take away from the 4 frontline squadrons of F35B.

If they were to form a 5th and 6th squadron, of A variant, then I’d be fine. But would have to be in addition to the 4 B squadrons.

the_marquis ,Nigel – in the last (of many threads on here) I stated that Training for the F35 of all variants is done by Simulator,and I’m still of the opinion that the A,B and C are versions of one and the same Aircraft which should ease Logistics etc,perhaps the MOD will offer some clarity in SDSR 2020 and order some ‘A’ s, and join the USMC,JASDF and Italian Air Force in using a mixed fleet.Ive mentioned before that even the ‘C’ version has some advantages but that’s too far thinking at this time.

No, the Marine is supporting the argument that the RAF should get rid of Typhoons and go to an all F-35 force.

While not stealth the Typhoon has the advantages of increased payload and range over the F35.

If anything we should buy more Typhoons; get some Tranche 3s to replace our older Tranche 1s and get some EW/ECM variants the Germans are considering as an additional squadron.

Typhoon and F35 in my opinion is a good combination and will complement each other. Shouldn’t sacrifice one for the other.

Totally agree, more typhoons makes economic sense. In previous posts I have suggested the C variant due to the range and payload and purely land based.

For critical mass do we also need light attack such as the scorpion with a decent radar , meteor and brimstone. These aircraft could form the ayxillary air force to minimise cosrs.

I agree we need a cheaper aircraft for CAS role, seems silly using Typhoon or F35 for this and the reason we do is simple: lack of other aircraft. The Harrier was perfect for this but alas, they are all gone. Unsure about Scorpion; if we were to go down that route we might as well use a Hawk variant; no need for an OCU as all fighter pilots are trained on Hawks anyway. If not Hawks then a better solution could be more Protectors; relatively cheap, don’t need an OCU as simulator training is enough as the pilot is… Read more »

The UK has already procured an affordable type for CAS the General Atomics RG Mk.1 Protector RPAS and is in the process of adopting it into service.

Can it be launched from and recovered to QE carrier?

Just a theoretical question, but could F35C operate from STOBAR carrier or does it have to be CATOBAR?

Probably depends how heavily it is loaded. If there where no bombs and a 1/4 tank of fuel on board I’m sure it could take off, just wouldn’t be much use.

It would not have vectored thrust to launch.
Unless it was given the swirl jet engine.

Id say no – the F35 is a relatively big Bird with not much T-W Ratio to spare,id be happy to see what the actual figures are .

On a personal note, my Father, who served in the USMC, WWII, China, French Morocco, and Korea as well as points East told me long ago: If it weren’t for the “fanaticism” of Marine aviators in support of their ( himself included) comrades on the ground during the withdrawal of 1st MarDiv from Chosin Reservoir Korea, the division would have been destroyed by the Chinese and NK forces. According to him. they flew with reckless abandon in weather that grounded all the other services and he personally witnessed one F4U pilot crash into an enemy position when his aircraft was… Read more »

Hey, potentially stupid question… why are the Marines procuring any F35Cs at all? I get that they have the Bs to fly from their Wasp class ships and the Marines like to have a bit of everything but not really sure I understand why they need planes that would fly off of Navy carriers…

Probably a silly question but why are the USMC getting the F35C, do their pilots also operate from the carriers? I thought they would just get the B variant for use off the Wasp and America class.

Yes, the USMC also operate from the US Navy carriers. As was mentioned above they use the B variant from their Amphibs and will use the C’s when flying from the carriers instead of the F/A-18’s they currently use. Which got me thinking. If we split B and C rather than A then we would have integration with both sides of the US Carrier strike options but we could also operate in conjunction with the CdG and her battle group and fly them from land with their extra range and compatibility with our current tanker fleet when we aren’t. I… Read more »

Yes I’ve said before that buying the ‘C’ would give the RAF/FAA that option, plus it future proofs any decision made to convert the QE’s to CATOBAR.

The first Marine F-35C squadron will deploy aboard the USS Carl Vinson in 2021. The Vinson is currently in drydock for its 15 month DPIA.

Ironically one of the oldest carriers in the fleet being the first fitted to sustain and operate the C model while the first 2 GRFs cannot. The JFK is supposed to be retrofitted before delivery due to congressional anger over the situation.

Actually, it has to do with planning and availability. It always was planned for the Vinson to have the first F-35cs. It currently is undergoing a massive 15 month refurbishment.huge refurbishment. The major problem with the Ford is the elevators. EMALS is working. The JFK won’t join the fleet until the mid 2020s.

I’m not an expert so I’m wondering what a Typhoon will do better than a manned drone and whether other types of manned aircraft will be more valuable in future. Do we even need a manned combat vehicle?

Everyone is missing the most important piece of info in this story – The Black Knights are the squadron Will Smith flies for in Independence Day!