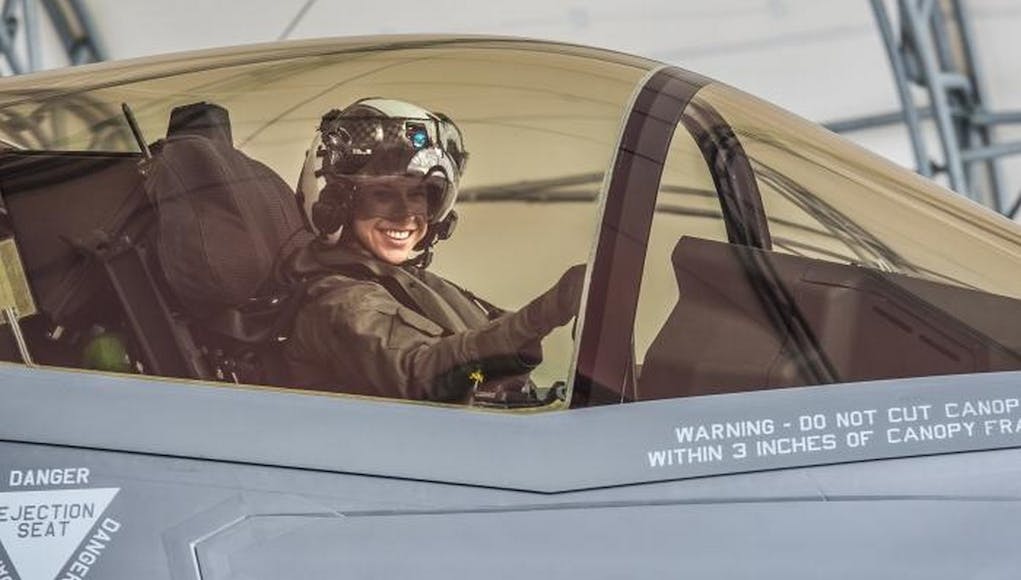 According to the US Marine Corps in a release, flying is nothing new to Satz—prior to joining the US Marine Corps she earned her commercial pilots license flying a Robinson R44 Helicopter which she attributes to preparing her for a career in military aviation.

“Over the last four years, Satz, 29, has completed Aviation Pre-flight Indoctrination in Pensacola, Florida, Primary Flight Training in Corpus Christi, Texas, where she learned to fly the T-6 Texan II, then to Meridian, Mississippi, where she flew the T-45C Goshawk advanced jet training aircraft. Upon completing her initial trainings, she was assigned to Marine Fighter Attack Training Squadron 501, the “Warlords,” to train on her assigned fleet aircraft: the F-35B Lightning II Joint Strike Fighter, the world’s first supersonic STOVL stealth aircraft. It’s designed to operate from austere, short-field bases and a range of air-capable ships operating near front-line combat zones.”

“At each of my training schools I did my best,” said Satz in a release.

“I truly believe that showing up prepared and working diligently are two major keys to success.”

After arriving to MCAS Beaufort in July of 2018, she took her first flight in the F-35B in October that year.

“The first flight in an F-35 is by yourself. The syllabus thoroughly prepares you for that first time you take off and for every flight after that, it’s an exhilarating experience.”

It’s always a huge deal why?

I think it’s the parallel parking feature of the F35. It’s a big accomplishment.

Not quite sure how a single article can be qualified as a “huge deal.”

I know what Cam means. It is not just this article but everything concerning a first for women.

It’s just the way things are.

Its not just that article, theres far more like it, it’s like a huge achievement doing something men do all the time now. Are we going to celebrate every time a women flys a new aircraft. Women have been flying for a dam long time now and are pretty great pilots most of them so I’m not surprised she can fly an F35, I just dont get the big deal made.

Well like it or not it’s news worthy, like lots of other things that are firsts and no doubt will be useful for inspiring other girls to take this step just as perhaps the first non public schoolboy Royal Flying Corp might have been once upon a time had it happened in modern times. I’m sure having been completed the subject will become far less of interest and thus far less news worthy. But in the end it’s no different to ‘first local boy/girl does something of note’ and such type headings or the gold pillar boxes for local Olympic… Read more »

On the theme of women pilots, it was a pity that more was not made of our female aviators during WW2. Yes, they did sterling work flying aircraft from the factories to their bases. But, during the Battle of Britain, wouldn’t it have been better to have had a few women’s squadrons. Pilots like Amy Johnson had hundreds of hours in their log books…better than putting 19 year old kids with 6 hours on Spits into combat!

I agree, women played a huge role in just equipping squadrons alone with brand new planes, in fact lots of men receiving them actually didn’t believe it was the women flying them.

As ever hitting the nail on the head. Why not throw on a few legless ones in as well.

Herodotus, I think that Trevor is making a point. The RAF and Luftwaffe had some legless ones, so they have been there and done that. Group Captain Sir Douglas Bader CBE DSO with bar, DFC with bar, DL, FRAeS. Missing two legs and attempted on several occasion to escape from several POW camps ending up in Colditz. If my memory serves me right the German pilot (Stuka) was Hans Ulrich Rudel, Knights cross with golden oak leaves,swords and diamonds. Sunk a battleship, a cruiser,70 landing craft, destroyed over 500 tanks plus over 800 vehicles and 2,500 ground attack missions. He… Read more »

They didn’t make a big deal of Douglas Bader? You have to be kidding me he was used extensively in propaganda material to the extent he deemed deeply unpopular by many for gaining a reputation and mythical status not to mention influence well beyond his actual achievement while others of far greater status were deemed of relatively no individual importance because they didn’t stand out physically. The whole Big Wing argument encapsulated that debate between percieved popularism and reality at the battle front that the genie of publicity let loose. These things are always exploited and in that scenario understandably… Read more »

my mate used to live on the old Woodley airfield development, he lived on Douglas Bader Close

The point I was making was the potential under utilisation of qualified personnel during WW2. But thanks for the clarification.

Come of it. You were just attempting a top troll effort.

Or amazingly thick. Asking for having several “women’s squadrons”… all based on the back of Amy Johnson? Come off it.

Rudel had an amazing career.. I believe he was also shot down 17 times and landed on occasion behind Russian lines to rescue comrades.

Honestly, how can you compare the culture of the mid 20th century to today? What was considered morally reprehensible back then is considered okay today.

Back then, women were the weaker sex and had to be protected by men. The idea that a woman would be put in harm’s way on purpose was a big no-no.

Get a bit of Douglas Bader spirit flowing

Me
Reply to  Cam

Exactly…the liberal obsession with identity politics (race, appearance, skin colour, sexual orientation, gender, etc. etc. ) continues unabated. We have to stop this stuff and normalize when anyone does anything. Calling out gender in this case makes it sound like women can’t do anything. It adds to the fractures and compounds the friction between people that exists in our societies. Liberals, please stop and treat everyone equally.

Herodotus
Reply to  Me

I am sure that many people in this country would like to feel that they are being treated equally. Unfortunately that isn’t the case. Racism, homophobia and misogynistic attitudes still abound. Why do people feel that an article like this is in anyway a threat?

Me
Reply to  Herodotus

Once you see 10,665 “firsts” you may see as I do that it perpetuates division and makes certain people feel victimized – which they aren’t. At least not like these groups were back in the olden days. Example: Theresa May when she resigned said “now every little girl will feel she too can be PM.” When in fact this REAL FEAT was accomplished by Thatcher. DECADES ago. See, the victim culture almost expects those kinds of comments, that’s my issue. Thatcher – not May – broke that ceiling but May latches on to identity politics because there is a reward… Read more »

They don’t, they make comments saying why have the article as…..oh sod it, if you dont understand then go back to trolling!

This is a huge deal in itself… The Kido Butai lives…

ISIS will be hoping she doesn’t get the kill on them. Apparently, they don’t go to paradise if killed by a woman!

Very well done Capt Satz, maybe she will inspire a few more women to join a very male dominated profession. Thats why it makes the news. And we need every Man and Women we can get these days. ?

What maybe even more impressive is that she also got through USMC selection its own right. If my memory serves me correct (and my wife’s cousin was a Marine), everybody goes through the same selection, regardless of role