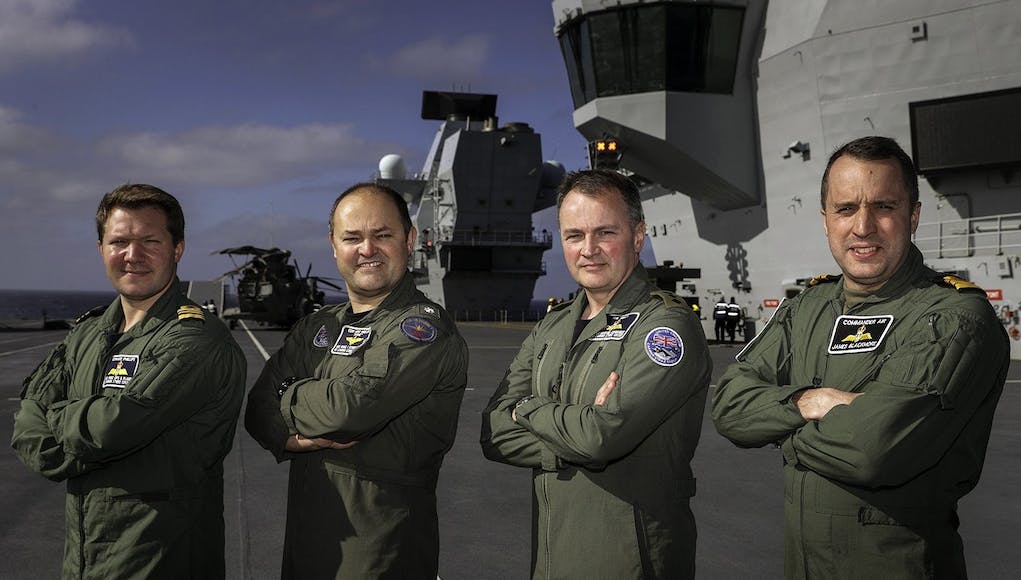 The first fixed wing fighter jet pilots have embarked on aircraft carrier HMS Queen Elizabeth as she prepares to begin flying the F-35B later in the year.

According to a Royal Navy press release, the ship is coming to the end of a period at sea where she has been conducting first of class flying trials for rotary wing aircraft. Two Merlin Mk2 and two Chinook helicopters from the Aircraft Test and Evaluation Centre (ATEC) at MOD Boscombe Down have conducted hundreds of test sorties in a variety of conditions over the past few weeks, working through the aircraft’s operating parameters from the ship at sea.

“The data gathered during the trials will enable the ship to declare Initial Operating Capability (IOC) as a Landing Platform Helicopter (LPH) later this year, a role held most recently by HMS Ocean.

Royal Marines from 42 Commando have also been on board during this trials period, undergoing Assault training – whereby they are processed through the ship and launched by helicopter to conduct operations ashore.”

Whilst the ship continues trials and prepares to return to the UK for upgrades and maintenance, the focus is switching from rotary wing trials to the first embarkation of fixed wing aircraft in the Autumn; the first F-35B jets will be flown from the carrier for the first time off the east coast of the USA say the Royal Navy.

Colonel Phil Kelly, Royal Marines, is one of four fixed wing pilots to have joined HMS Queen Elizabeth in recent days, to set the conditions for the future integration of fixed wing squadrons. He explained:

“This ship and its capability has been decades in the making and I am here to help bring together the air strike battle aspects. I have flown from all of the Invincible class carriers and from the American Carriers USS Bush, Truman and Reagan. This is now my seventh carrier, so to be able to bring my previous experience back here to be able to set this ship up ready to receive strike fighters, and hopefully in the future to be able to come back and fly them, is an immense privilege.”

Also joining the ship is Commander James Blackmore who takes up the role of Commander Air. He said:

“This is something we have all waited for about 20 years to see, it’s very exciting and a real privilege to be a part of. The main challenge for us is getting focused on bringing a jet to sea again, and that’s not a simple prospect. There are only a handful of nations in the world who operate aircraft carriers and aircraft at sea.

In simple terms, when an aircraft leaves the deck, it leaves its runway and the runway isn’t where it left it when it comes back. The runway pitches, rolls, heaves, moves, gets covered in waves – all those things are at play when you bring an aircraft onto the deck. That will be a unique thing for many of our people, and we need to train to understand and work with the challenges involved in conducting our air operations safely.”

Looking forward to seeing the first F35b’s on HMS Queen Elizabeth later this year.
Meanwhile the carrier is doing a lot of work with helicopter integration.
https://mobile.twitter.com/hmsqnlz?lang=en

Shame they did not bring their planes with them!!!!

LOL, exactly what i thought 🙂

Would have been nice. Here is a bet-Headline in tomorrows Mail-
“Four pilots arrive on HMS Queen Elizabeth with no Planes!!!!”

They are the leadership, they are there to prepare the ship for fixed wing jets.

Now, to make them truly effective lets make sure we order enough jets.

Not going to be able to put a full complement on it until 2023. 42 will be in service by that date, 24 FOC fighters for deployment and 18 training aircraft, but in a pinch we could fill out a carrier with 36 F35-Bs if we needed to.

I think we should have twelve front line squadrons – seven Typhoons and five F35-Bs (two of which are on carrier duty).

All the numbers should work back from there.

Ben P – That is UK sourced aircraft. You are forgetting the commitment from the USMC to provide initial squadrons both in build up to IOC and operational aircraft (and crews). The USMC have given that in writing partly because we gave up production slots to give them a faster IOC with their F-35Bs but mainly because they want to work closely with us. I will lay odds that by the end of this year we will have at least 2 fully equipped and operational squadrons (1 x FAA / RAF and 1 x USMC) on board QE for non… Read more »

I was not suggesting it would not be declared IOC, I talking about our ability to put a full sovereign compliment on a carrier, which would need three squadrons. The US Marine Corp will most likely provide a squadron as you said, but they will not be on it this year. We will still be conducting flight trials in to next year, we will more than likely see a squadron aboard in early 2019.

Not sure if this was a true location ! I’ve been following her AIS and it did indeed show her off Malta last week but she was still showing that location in real time transmissions as I watched her arrive back in Portsmouth via the Portsmouth Harbour Webcam.
Also HMS Kent has been showing ‘live ‘ transmissions from Westwood Cross Shopping Mall Ramsgate in the last week or so!
AIS can be spooky !

Pilot is a Royal Marine. Is that a typo

His rank is given as Colonel, so I assume he is actually a Royal Marine.

I’ve never heard of a (UK) Marine pilot before.

Whats with the gangsta stance?

Royal Marine LC’s stand like that for their photos. Are the gangstas?

Are they Royal Marines if not then that is an idiotic gangsta stance.

Watch out Marc, or they’ll pop a cap in your a*s!

Article says one is a RM which surprised me as I did not think they had fixed wing pilots. There you go.

What would be an appropriate stance for you for our service personnel?

And does it even matter??

Col Kelly is the only RM pilot. His flying career goes back to Harriers on Illust. and Ark he also flew in Iraq and Afghanistan as well as with US Navy. A very competent pilot.