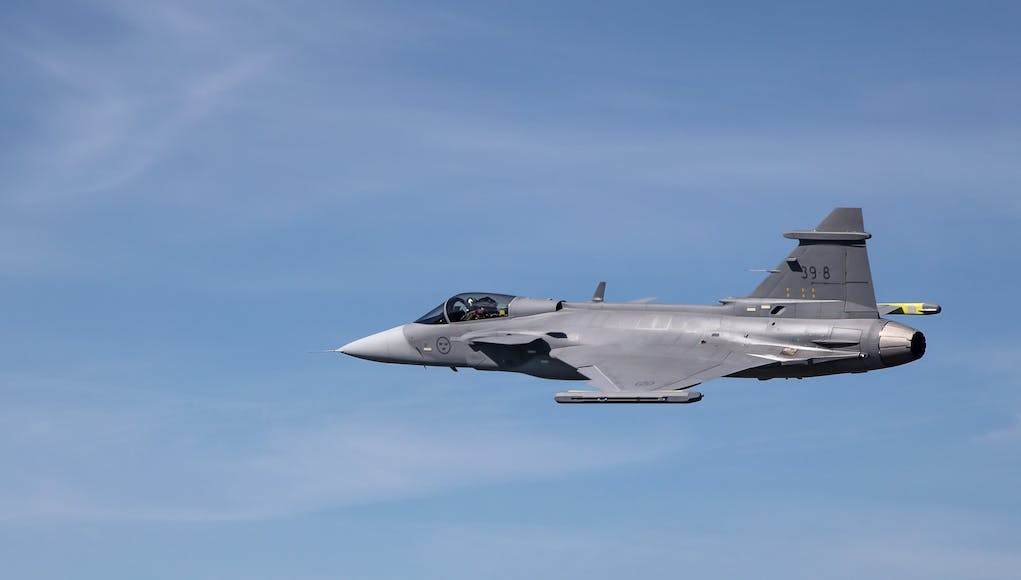 Gripen E has successfully completed the first tests to verify the ability to release and launch external payloads.

The tests took place in October 2018 at Vidsel Test Range in the north of Sweden.

The tests, conducted by the first Gripen E test aircraft (designated 39-8), comprised jettisoning one external fuel drop tank and one firing of an IRIS-T air-to-air missile.

“As a pilot, flying with external stores such as drop tank and missiles is important to allow for evaluation of how the aircraft behaves with the stores attached. This test was also used to evaluate the effect on the aircraft when releasing and launching the stores. The highlight was of course to pull the trigger and watch the missile fire away. It also brings us closer to making the aircraft ready for its operational use”, says Marcus Wandt, Experimental Gripen Test Pilot at Saab.

“I am pleased to see the aircraft behaving and performing according to our expectations, which is proof of its smart design and world-class engineering by Saab. The programme is on track, and we are making good progress in the programme towards delivery to our Swedish and Brazilian customers”, says Jonas Hjelm, Senior Vice President and Head of Saab business area Aeronautics.

These tests are the latest steps in the Gripen E flight test programme preceded by the carriage trials in July and forms part of the weapon integration work.

I love the gripen e, it’s a good jet at a good price. I want to see them be successful because in turn that helps Britains huge aerospace industry.

I loved the fact Argentina was wanting to buy some gripens but Britain put political pressure on Sweden to not sell them to Argentina, I’m not sure if 30% of the gripenEs parts are British built has anything to do with it.

The riddler
Reply to  Cam Hunter

Why? Have you flown it?

Britain doesn’t have any political clout with Sweden. They probably realised that if we ban those 30% from being exported to Sweden, the price of their own jets would skyrocket, that and they probably didn’t fully trust Argentina to actually pay for them, thanks to the mess that is their economy right now

So if we can stop the export of parts because we aren’t happy with the destination of the finished product we have clout.

From what I have read, there was some political pressure from the UK in denying the sales of the Gripen E to Argentina. The fighters to be sold were to be from the Brazilian production line, not directly from Sweden. Brazil’s decision not to pursue the sales to their neighbour to their South may be due to pressure from the UK government. Afterall, didn’t they just get a big ship from the Royal Navy on the cheap? Don’t they already operate a few ex-RN ships?

Right now even the US can’t sensure turkey for fear of a two year halt in F35 production due to parts made in Turkey. Same goes for Sweden and Saab.

You would not want Grippen sold to Argentina as we would have to increase our defence commitment to the Falklands to safeguard against the capable jets.
I would think a more likely sale ofGrippen Es would be Eastern European nations that need a jet capable of facing Russian incursions and not costing the same as Eurofighter or Rafale which are too costly for most nations with borders to Russia.

Would the UK save money by ordering some of these rather than the full 138 F35 purchase? Assume they are far cheaper. But would the savings by offset by operating another type? So for example 80 – 90 F35 for the Carriers and 50 of these. If we end up going down the two tier navy route, High end T26 T45 and low end River T31, much like in Nelsons day actually, how long before the RAF follow suit? My concern, as always, is numbers, and trying to achieve a better balance of quality and quantity while still operating good… Read more »

Daniele_as also stated here I wonder if indeed there is any wriggle room regards the total number of F35,s to be purchased.Hopefully the full 138 will be but obviously it will take a long time for that plan to come to fruition.I would agree that the Gripen E offers quite an attractive alternative but I’m not sure much would be saved in actual buying costs.Where it has an advantage would be in running and maintenance costs.It would be perfectly capable of carrying out Baltic Air policing, Operation Shader etc and even use in the Falklands.As a Triad of capability a… Read more »

Gripen is nice but its too small for us. If we were a small country looking to defend our air space on small budget then it would be fine. But we are a large country with global defence commitments and we need suitable platforms capable of expeditionary warfare (on a tight budget). That’s why F35b is ideal.

Now if the MoD budget was larger and we had money for say a Jaguar replacement then yes I would buy a third FJ platform. But it would be adjunct.

Steve Taylor-agree that indeed if the Defence Budget was bigger a 3rd Type of Combat Jet would be a possibility,but the point I and others are making is that a reduction in one type (F35b) could open up the case for it too.Its a cliche I know but Horses for Courses springs to mind.All our global commitments would be met and the correct Aircraft chosen as the situation dictates.Also the Jaguar replacement is already in service- it’s the Typhoon.

If the UK does Not buy the number of F-35’s that it committed to buy, that is 138, the USA will most likely end tier 1 partnership, with it the 15% share of total revenue, which is projected to be worth £90+ billion to the UK economy. We only just need another unfriendly president like Obama, who said to the UK ‘Get to the back of the queue’!!

Are they even able to do that?

I believe our tier 1 status was due to the billions we contributed in the development of the aircraft in its R and D phase, not the number commited to, like with Typhoon and Euro work shares of so much %.

We paid for our status. Not by the number bought.

Happy to be corrected.

The 15% number is great for politicians, but i do wonder if it is actually good value for us tax payers.

Assuming the figure was correct I read 2.5 Billion pounds in Navy News, long, long ago.

Yes they could. American defense contracting is based on both R&D and numbers procured. Anyone of the following: the President, Congress, Senate, State or Defense Departments could order the workshare terminated. For ANY reason they deem sufficient. Whether they would is another matter setting up more suppliers would mean delays. That would depend on their mood and who showed up to the Armed Services committee on a given day. If the Reps who showed up are from say Ft.Worth or St.Louis for instance they would vote to throw their grand ma off a cliff if it threatened their districts employment… Read more »

Basic plane not up to top NATO spec . You only get what you pay for decades behind the f35 .

P tatersall_surely that’s the point, the Gripen offers a reasonable capability for a reasonable price.Many countries simply cannot afford Typhoon/F35 level of fighters, when you factor in cheaper running costs plus it shares some of the weapons already earmarked for the RAF (Meteor) it certainly can’t be dismissed.

I would have to disagree. A good cheap option would be the KAI F-50, not the Gripen. If you look at competitions for combat aircraft around the world in the past decade, the Saab Gripen has been going up against the F/A18, the Typhoon, the Rafale, the F-16 and the F-35. It is a peer of the Typhoon and the Rafale. Its major drawback/advantage is that it is a single engine fighter, and its combat radius of the A, B, C and D variants is less than that of the comparable twin engine European fighters. The range of the Gripen… Read more »

The question is really interesting to spend a lot of money on a fourth-generation aircraft like Typhoon?
The number of aircraft in Raf’s flight condition is low due to cost, there is no money to maintain readiness.

Agree with P tattersall. The only reason for buying Gripen E would be if it were the only way to maintain a/c numbers.

Which I believe is the moan of just about everyone here and elsewhere at continuing cuts.

Which was why I suggested it.

We can continue with all high end but people must not then complain. At what point will Britain realise with current and likely future HMG policy on defence that there has to be a balance.

I think that the RAF should follow the Navy’s example with high and lower end equipment. At the high end of the Navy are the Type 45s and Type 26s. Fewer in number but world beating, for protecting the carriers and battle groups. Then the Type 31s, less capable but cheaper and potentially more numerous to perform at the lower end of the spectrum of duties such as anti piracy, drugs etc. The RAF should have emulated this: Typhoons and F35s for the higher end stuff; air to air combat against peer enemies like Russia as well as strike and… Read more »

What a lot of commentators are missing is the requirement for a high-low mix of aircraft in any peer/near-peer conflict. Just look at the outcome of the RAND study of the possible fight over Taiwan from a few years ago. It’s all good and well having 100 F-35s in the air (which we never would) but factor in the need to defend other airborne assets, their limited (4!!!) shooting power and suddenly you’ve really not got a lot to play with. Now consider the size of our tanking fleet, airborne-early-warning aircraft etc and you see that we have a bunch… Read more »