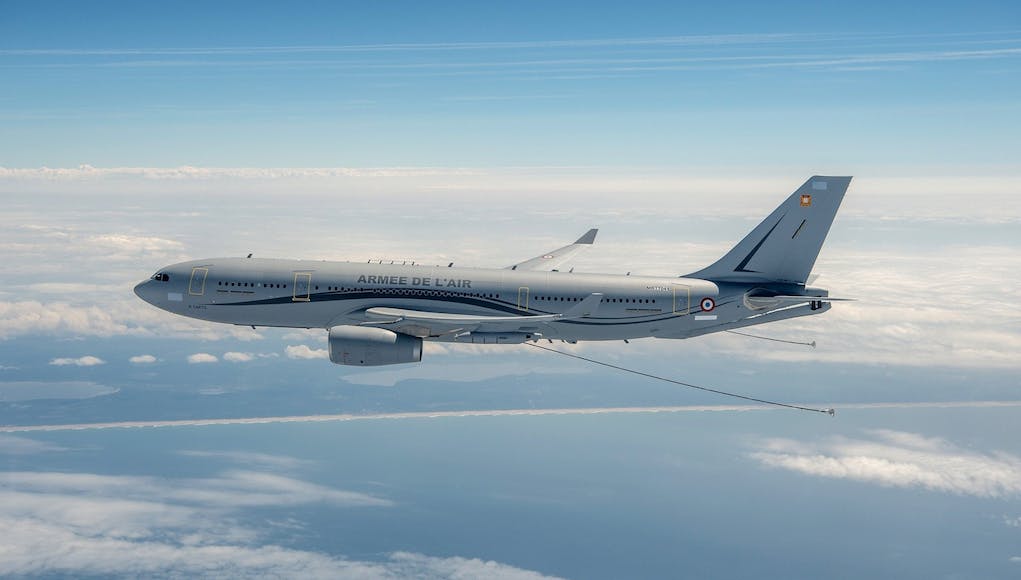 Airbus Defence and Space has received a firm order from the French Defence Procurement Agency (DGA) for a further three A330 MRTT Multi-Role Tanker Transport aircraft, it has announced.

The aircraft, known as Phénix in French service, constitute the third and final tranche of the multi-year contract for 12 A330 MRTTs signed by the French Ministry of Defence in 2014.

The first of the fleet was formally handed over in October and the remainder will be delivered by the end of 2023 under an accelerated timescale requested by France.

In French service the A330 MRTT will be powered by Rolls-Royce Trent 700 engines and equipped with a combination of the Airbus Refuelling Boom System and underwing hose-and-drogue refuelling pods.

The A330 MRTT has been ordered by 12 nations which have now placed firm orders for 60 aircraft, of which 34 have been delivered.

Why don’t we buy some ? and fit them with …… Sorry had to get in first ! You know who you are.

We should fit ours with central booms for refueling our f35s because we can’t do that just now….

Looks like they have flying booms which will allow the French to refuel RAF C-17s, P-8s, RC-135s and Wedgetails and also a large proportion of the USAF, something the UK can’t do. Not only that, the French are also buying refuelling pods for their A400Ms, so they will have a very respectable refuelling capability. How long will it be before the US regards France as their premier military partner in Europe?

Airbus have teamed up with Lockheed Martin to market leasing the A330 MRTT to the US due to the continued delays and massive cost overruns with the Boeing KC46. Their current KC10 and KC135s are well past their sell by date forcing the USAF to look at manufacturing new main wing spars to extend their lives.
After Boeing launched a legal challenge and eventually won the contract with the KC46, looks like Airbus could get its own back…It’ll be interesting to see what happens.

Assuming they are buying them outright?

Why have they not done the PFI route like we did?

Does PFI even work though?

Hasn’t worked with Capita or Interserve.

Steve. I knew when I wrote that it might be misinterpreted. I’m against PFI myself! Wish we had bought our Voyagers outright. We didn’t, and I read lots of for and against arguments here before. I know that we pay for a full service under the contract, for is it 25 years? I forget. Just wondered why IF that system is so great like what we hear others also don’t go that route. Capita is a disaster and those responsible need naming and hanging out to dry. The will probably get a juicy payoff instead, like Mourinho. The system always… Read more »

@Other Steve PFI have pros and cons. In theory you are benefiting from a bigger order/cost savings from the PFI, but in practice the government tends to be the only customer and so very little savings. They also spread the cost, which for a cash strapped nation it makes a lot of sense, but it tends to be false savings, the same as buying a mobile phone on a contract, you save up front but pay more over the course. Does it work, well i would flip that, if we couldn’t afford the Voyagers at the time, and needed to… Read more »

PFI was a con from the start. Gordon Brown came up with it as a way of leveraging billions of pounds of extra spend into 10’s of billions. In the end the bills would flop onto govt’s desk but the assumption was that by then someone else would have to pick up the tab. It kinda worked. The French ain’t that cynical.

Brown, as much a liar as he is, had little choice but to go down the PFI route. Lenders were reluctant to invest into Labour supported capital projects, so in order to fix up or build, they farmed out the whole package, knowing it would make business support them. The conservatives have used it as both a delaying tactic, saying the national debt is reducing under them, hoping the other party or other people are in post when the bill comes, and also getting money into their mates and supporters pockets from the public purse. The dererral of debt is… Read more »

Gfor. The argument used at the time was it was a way of getting dramatic results eg NHS, Schools etc in short space of time. PFI was basically a huge Credit Card. Maybe i’m being cynical about politicians motives. But it’s only through bitter experience.

Yup. Hide debt by putting it somewhere else and at a higher cost to service that debt. It’ll come back and bite us one day, in fact it already has e.g. various NHS trusts having to service the high costs of all the PFI obligations that were heaped on them. OK, they got new hospitals but if they could have been funded by conventional government borrowing it would have been a lot cheaper in the long term, but then when do politicians ever think of the long term.