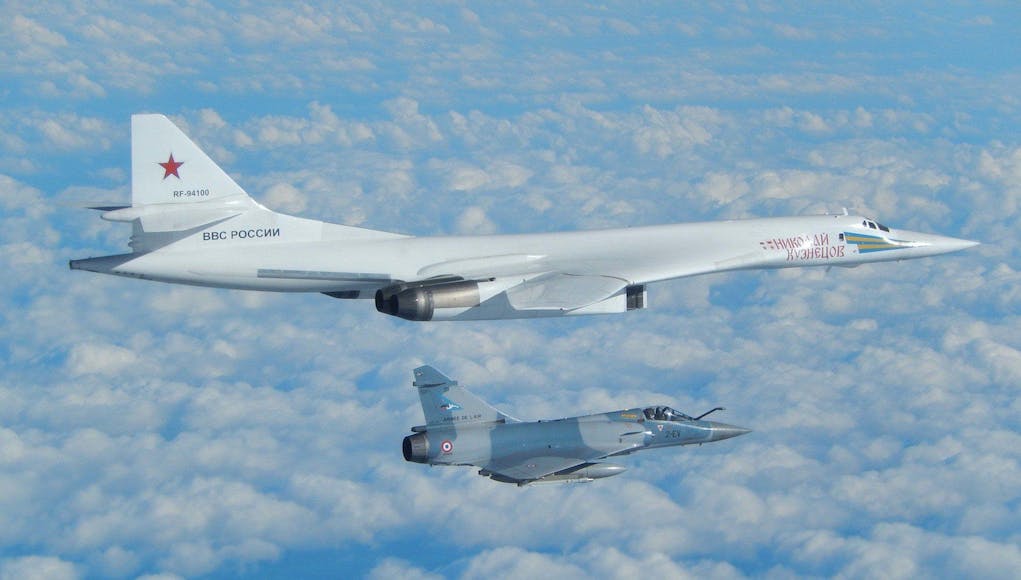 The French Air Force during a ceremony today took over NATO’s enhanced Air Policing mission from the Italian Air Force, augmenting Baltic Air Policing that safeguards the airspace over Estonia, Latvia and Lithuania.

“NATO’s presence in Estonia, and in the region, has never been so significant as it is now and your air policing activities are indispensable part of NATO’s visible presence and deterrence in the Eastern border of the Alliance,” Estonian Minister of Defence Mr. Jüri Luik addressed both detachents in the presence of senior political and military representatives from Estonia, France, Italy and NATO and international guests according to a press release.

“It is of utmost importance that you are here and your contribution to the Baltic Air Policing mission is invaluable,” the Minister added.

After a tour in the Baltic region the Italian Air Force Eurofighter detachment led by Colonel Eros Zaniboni will redeploy to Italy. The 100-strong French Mirage 2000-5 detachment under Lieutenant Colonel Vincent Repolt is going to ensure quick reaction alert interceptor duties to continue execution of the Allied mission.
“Here at Ämari the Air Policing detachment has another mission under NATO’s Assurance Measures – a mission introduced in 2014, which has consistently demonstrated Allied collective resolve, the defensive nature of NATO, and also is forming part of NATO’s successful collective deterrence posture,” said NATO’s Allied Air Command representative, Hellenic Air Force Brigadier General Panagiotis Dimopoulos, Deputy Commander of the southern Combined Air Operations Centre in Torrejon, Spain.
“Both, the rotating detachments and the Host Nation, have been instrumental in supporting this goal visibly and very successfully,” he added.

Since May 2014, the Estonian base has been host to the augmenting detachment for the standing peacetime Air Policing mission in the region hosting 17 successive rotations of Allied fighter aircraft visibly underlining NATO’s collective commitment and solidarity. The mission is controlled by the northern Combined Air Operations Centre at Uedem, Germany.

Welcome to the party France. Nice to see some of our EU friends and allies doing their bit.
Just realised if the entire combat ready German air force typhoon fleet was deployed on NATO air policing duty, all 4 aircraft, then Germany would have precisely zero aircraft left for QRA duties. Do they even do QRA duties in Germany???
Europe is a joke, they need to get with the game plane.

Welcome to the party France. Nice to see some of our EU friends and allies doing their bit.

France has deployed 7 times to cover the Batlics air mission

Germany have covered the duty 10 times.

The UK in contrast has covered the task 4 times.

You’re not ment to use actual facts when discussing Europe, it doesn’t fit the Anti-European narrative.

Anti EU narrative there is a difference.

His comment had nothing to do with the EU even though he tried to shoehorn it in.

It was about France and Germany apparently not doing enough NATO duties.

He mentioned an anti European narrative which those who oppose brexit like to use as one of the reasons people voted out. Thus, we are always leaving “Europe” I have seen this slant countless times on tv, newspapers and magazines.

As marc is indirectly pointing out, we are not leaving Europe. We remain part of Europe and still want to be allies, friends and trading partners.

I guess marc thought you are continuing that theme.

Just how I read it anyway.

Hi mate It’s not about Marc’s comment though, it’s about the original comment from J Bell, the comment he made had absolutely nothing to do with the EU. It was a dig at France and Germany, which as Farouk pointed out does not really stand up when you take in the facts. So what are the rules of engagement when it comes to discussing European countries now? Or are they EU countries? What happens if I take a dig at Norway? Is that Anti-European or Anti-EU? The difference between Anti-EU and Anti-European couldn’t be any clearer, want to take a… Read more »

Ok mate that is understood.

As far as I see it as these are military matters the EU is irrelevant. These are European NATO allies.

Admittedly there is bound to be some bias on occasion when mentioning France or Germany as opposed to Norway due to historical rivalries and some posters take it further than others.

I beat the Germans have not done so recently or are scheduled to do so again any time soon.

Well spoken SoleSurvivor! I notice far too many nationalistic and xenophobic comments in some of the posts on ukdj. You can be patriotic without being nationalistic. You can support our armed forces without denigrating those of our allies. You can be pro EU and still be proudly British (although I’m not sure why the EU has been dragged into this). You can be pro Defence and still hold liberal views on most issues (indeed most serving senior military officers do). Can we keep nationality and politics out of what is otherwise a really interesting and healthy exchange of views on… Read more »

From my perspective I think that its a good thing France under Mr Macron is prepared to contribute to multi-national Military Action,can only be a bonus to us on our side of the Channel .

no one seriously believes Germany pulls its weight nor is capable of doing so either in the air or under the sea. That has nothing to do with the EU and having French family I know Macron is getting fed up with it and Hollandais before him

Russ, not to mention the German armed forces themselves. I’ve met a few and they’re not happy with the state of affairs. They have excellent kit and know how to use it. But they have an antiquated procurement system and a very traditional attitude towards maintaining their kit. Certainly not the most efficient. But then again, nor does the USA for example. In areas, they are grossly inefficient. But it’s masked by their sheer size. France is not too bad. They are undergoing radical changes although still have some sacred cows that need sacrificing. Not helped by some of their… Read more »