NATO say that the Estonian population near Ämari, some 35 kilometres west of the Capital Tallinn, will get used to French Mirage 2000-5 fighters for the next four months as they take off from the Estonian Air Base.
The 200-strong French detachment of pilots, maintainers, logisticians and support personnel will operate the Mirage 2000-5 aircraft from Luxeuil Air Base executing NATO’s peacetime mission patrolling the Baltic skies.
“France is proud to be able to provide this support to NATO’s standing peacetime mission here in the Baltics, while at the same time ensuring the overall spectrum of its missions,” said Lieutenant Colonel Mathieu Courtaban, the commander of the French detachment.
“A total of eight French Air Force fighter deployments under NATO’s Baltic Air Policing mission since 2007 demonstrate France’s active role showcasing the spirit of this Alliance – one for all, all for one.”

The French Air Force deployment takes place under NATO’s enhanced Air Policing concept introduced in April 2014 as part of NATO’s intent to demonstrate collective resolve of the Allies and the readiness and defensive nature of NATO and to assure eastern Allies. 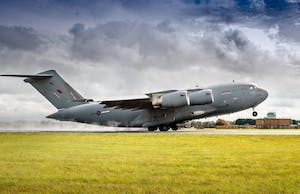 June 10, 2021
Despite earlier speculation, the Ministry of Defence have confirmed that there are "no plans" to reduce the size of the Royal Air Force fleet of C-17 Globemaster transport aircraft.