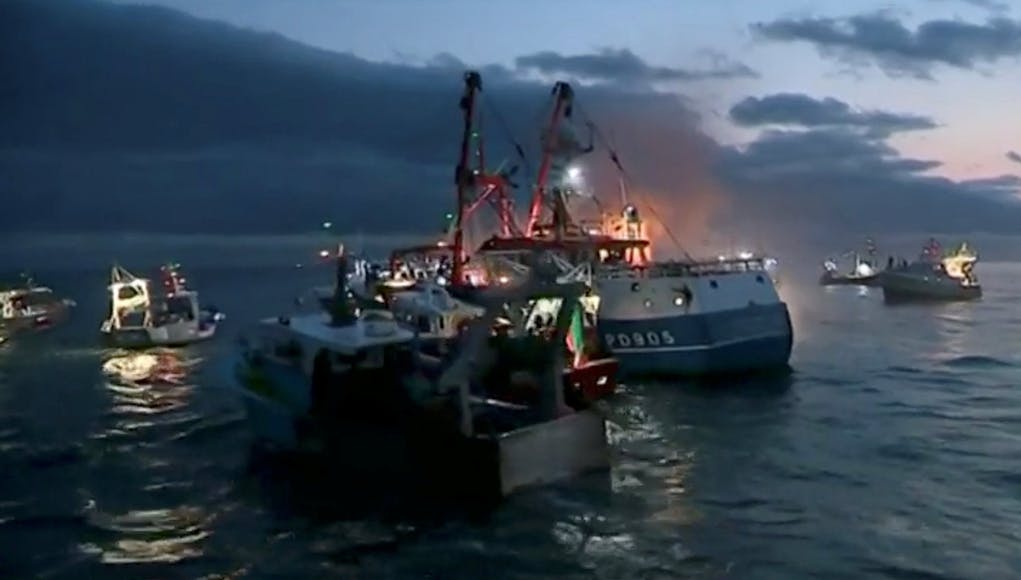 British fishermen accused the French of ramming their vessels and hurling projectiles. French fishermen are unhappy that their British rivals can dredge for scallops year round while they are barred from doing so during summer months.

“We can’t keep going on like this, we can’t keep having skirmishes like that,” Travert said in an interview on CNews.

“The French Navy is ready to step in if more clashes break out, as well as carrying out checks.”

France bans all scallop dredging between May 15th and October 1st, but Britain allows its vessels to operate year-round.

The Royal Navy earlier announced that it had no plans to deploy ships from the Fishery Protection Squadron, instead relying on French authorities to police their own waters.

Oh God no!! Surely we are not going to see more Cod Wars!! Lets hope Les matelots from the french Navy act evenhandedly otherwise this could get very messy.

“Surely we are not going to see more Cod Wars!!”

Well, with there also being talk of the tensions with Russia reigniting the Cold War at least there’ll be plenty of opportunities for a few typos in newspaper reports to create some very confusing headlines and articles 🙂

Haha-indeed Julian! I remember photos in the UK Press in the 60’s with an RN frigate alongside an Icelandic gunboat shoving each other from side to side! It was quite bizarre-I think from memory some warning shots were fired but no one was hurt.

The Gosport ferry was seen flying the jolly roger so don’t panic!

send out a quadron of our mighty archers, they’ll sort it

How will they act? Will they act without bias in upholding the rule of law, or will they drive off the British fishermen in any altercation without a second thought?

If they do it would be illegal. The RN is right to expect the French to police French waters, the FPS is too small to be everywhere, especially on someone else’s turf.

Of course, if the French navy does decide to be biased, there are of frigates and destroyers in home ports at the moment, or even just send the FRE

I feared this would happen once we got close to 2019. The UK will be tested and not just by France. I believe some thought should be given to converting commercial and reserve (none combatant) naval vessels to fishery protection. Such ships would be heavily reinforced all around the hulls, and equipped with high-pressure hoses. There should also be a light gun as an ultimate deterrent. No RN warships should ever be deployed on fishery protection, as witnessed during the ‘Cod Wars.’ Warships send the wrong signals even if the other side does. This is not appeasement, just common sense.

the french navy has ever bested us, tell them to off

If we banned fishing in our waters for a period to preserve stocks and some foreign fleet came in and helped themselves what would we do? Honestly

GWM-fair point. I am not taking sides on the merits in this instance but hope common sense prevails and no nasty incidents spiral out of control. we have mre important common enemies to confront without knocking hell out of each other

Unfortunately for the French, they are in the EU and the UK is still in the EU so the waters are EU waters and everyone in the EU can fish there freely. If the French do not want any other nation fishing there then they should leave the EU…

Lets remember that they fish in our waters too as they are allowed to by EU law.

Lee1. I think I recollect reading that the other EU states take 6 times more fish from our waters than we do from theirs.

On joining the E.E.C. the United Kingdom handed over its recognised fishing waters to all and any E.E.C. member sate and that list grew as the E.E,C. became the E.C. and now E.U. British boats have no special rights. Meanwhile, I don’t recall we Brits getting our hands on anything like compensating E.U. assets. But fisherman of whatever country you can think of follows sensible management of fisheries. These do need enforcing and I think the French have a point. Ona visit to Maine, U.S.A. I spoke to a fisherman who said the scallops were wiped out by over fishing.… Read more »

Not a very forgiving site this is it?

Won’t happen. HMG would rather let the EU continue to fish our seas that invest in the necessary capabilities. There will be talk of electronic schemes to manage quotas, UAV’s, and trust. But hulls in the water? Can’t see it. When it comes to costs they see themselves like a corporation, they don’t want assets sitting on the balance sheet or added costs of personnel. ‘Trust’ has got us into the situation where we are now where the French can land tens of times as much cod from the Channel as we can. Instead of seeing the seas as a… Read more »

Agree we need to retain all the batch 1 river class, upgrade them with UAVs for fishery surveillance like camcopter or some such UAV. Give the River batch 1+2s a cannister launched SSM and a RAM defensive suite and bingo a reasonable armed fishery protection vessel also capable of limited warfare.

“France bans all scallop dredging between May 15th and October 1st, but Britain allows its vessels to operate year-round.”

Poorly worded, here is how the Guardian reported the above:
Under EU law, the British are not allowed to fish within 12 miles of the French coast, but smaller boats can dredge for scallops in the 40-mile stretch of international waters known as the Baie de Seine – while the French have access only from November to February.

I think we should have a deal of sympathy for the French. They are facing the same problems experienced all too often by British fishermen. The violence however is ridiculous, they should focus their anger on politicians.

When push comes to shove the French politicians will back the French fisherman against us.

Trust and being reasonable is why our fisheries are in the mess they are today.

Hopefully this will give HMG some pause before decommissioning any more of the Hunts because the Rivers aren’t really the vessels for this type of work beyond being a ‘presence’.

We need about 8 steel hulled 750 tonners with monitors capable of speeds in the region of about 25kts.

do we? well write to somebody who can voice your concerns (your local MP has been elected to do so for example, however 99% of the UK seem to have forgotten this) rather than posting a fantasy shopping list on here like everyone else.

Thank you. They seem to come in threes. This was my second of the day and I have just had my third elsewhere on the web.

What a surprise a whole blog full of fantasy fleets yet you pick me to moan about.

This is a discussion blog about UK defence. When a story comes up where we face a possible shortfall in capability there will inevitably be posts containing “fantasy shopping list(s)”. I find them quite enlightening as to how different people perceive a problem and propose solutions. By all means lobby your MP, if enough people do something might happen, but don’t stifle discussion on here just because you don’t like what’s being said.

Being ‘kit centric’ is harmless. Let’s face it kit is capability. Lately I have been a bit despondent about the state of the RN and the Army. The RAF isn’t too bad off really, but there gaps there too. My assertions on maritime security are based simply on the difference between our capability and that of our peers. Unless our peers are completely utterly bonkers and just buy kit and fund personnel for the fun of it then it suggests to me we are sadly lacking. And knowing what is coming down the line after March next year doesn’t fill… Read more »

I can certainly understand the French anger and frustration at this situation, but it doesn’t excuse what amounts to piracy!

I do hope the French Navy are professional about dealing with this situation.

It is likely to be a heated situation…

If this has been going on for years, why has the French government not convinced the EU to ban dredging over the summer. They are bound to have the influence to do it.

Is it more that France out of principle thinks it should decide when to ban dredging rather than the EU, as that wouldn’t surprise me either.