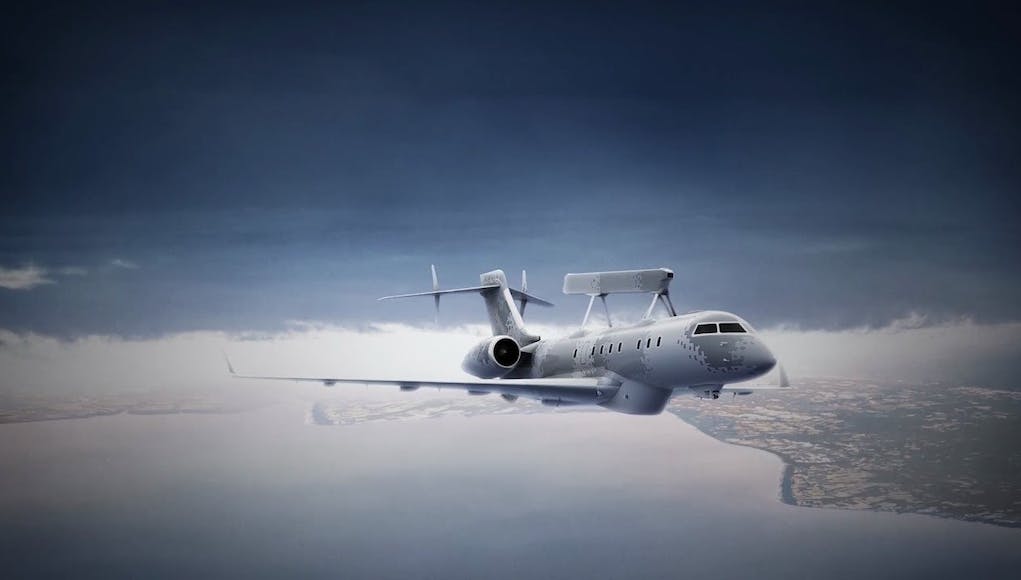 Saab’s GlobalEye has achieved a number of significant milestones in 2018, commencing with the rollout of the first aircraft in February 2018.

At the Farnborough International Airshow Saab explained the achievements being delivered with this newest addition to its airborne surveillance system family.

GlobalEye is an Airborne Early Warning & Control (AEW&C) aircraft that is a ‘true swing role multi-mission solution’ say the company, whatever that actually means.

Lars Tossman from Saab Surveillance, spoke about the highlights so far at the show ( we weren;t there but we did get a press release).

“In a period of just over two years Saab has rolled out and then, a few weeks later, flown GlobalEye. The flight test programme is running according to plan with the flight envelope being opened up, whilst on the ground the mission system completed all its rig testing,” said Lars.

“We are very satisfied with all these results and believe GlobalEye is going to be unrivalled in the capabilities it offers.”

The development and production contract for GlobalEye was awarded at the Dubai Air Show November 2015 by the United Arab Emirates with an initial order for two systems. An additional order by the UAE for a third system was announced in 2017. GlobalEye brings extended detection range, endurance and the ability to perform multiple roles with one solution, including tasks such as search & rescue, border surveillance and military operations.

(Chris H) – Excellent timing SAAB. Exactly what we nee to replace Sentry. And by coincidence we have this fighter called Tempest …..

Could these compliment the P8’s do you think?

Some SAAB Swordfish to follow QEC around the world wouldn’t go amiss.

Very tempting but of course, unless you’re on the inside of these things, we’ll never know how this compares with Wedgetail. My gut tells me to join the Aussies and go with Wedgetail although this might be the sprat to attract SAAB into the Tempest camp if that is a serious programme and we are seriously looking for a peer partner.

What I like about the SAAB programme; is the relatively short amount of time before it could be available to the RAF? As you say, we just don’t know the real differences between Wedgetail internally and other considerations. I would just like to see a quick solution to the Sentinal replacement, and avoid a protracted development. Nimrod still haunts the corridors of Whitehall.

I meant the Boeing with that whirly thing on top and not the Sentinal.

For me it has two initial attractions: Its a Canadian Bombardier aircraft with Saab systems which means we would be making a statement about NOT relying on the USA. As you all say AWACS (and versions of) is a very sensitive area and we don’t know the ins and outs but we do know that in aerospace the Aussies are like Japan and part of the US military purchasing system. Thankfully in naval vessels its different and how good is it we will be working with SAAB on the Aussie Type 26 and we are looking at the Aussie radar… Read more »

I feel it’s imperative that the UK makes a statement that demonstrates true post-EU freedom. Yes, okay, it could have strong political overtones, but if the Canadian/Swedish programme really works, then it would be a wise move to buy the above. Breaking paradigms is the one ace card the UK could explore to its advantage?

Sick of the cuts

Is there a comparison available, i would happily accept slightly less performance for more airframes.

tempest deal help combined with bombardier jet which makes parts of the plane in northern ireland …i think…. and cheaper than wedgetail – seems like a good idea to me

That’s the theory John, but we don’t know how much cheaper and true costs over the life cycle. Also don’t know performance comparisons. Also linking anything to Tempest at this stage is highly risky as it’s no more than a paper concept. My gut still says Wedgetail despite the fact that I’m no Boeing, NG or American fan. Just want the best for the RAF and Britain

That’s the key point – heads over hearts – the UK should buy what is “best” for its specific requirements. Best encompasses many attributes and trade-offs including military, financial, political and commercial among them but preeminent should be military capability and life cycle costs.

If the JSF can pump out ten times the radiation for jamming than a 4th gen , what can these massive aesa radars do ?

The raf and Germans are at loggerheads over the typhoon aesa as the raf wants major focus on the jamming / cyber attack capability.

How much of a game changer is this tech for electronic warfare ?

Good question Tim. Don’t know the answer. In effect all radars are jammers by definition. What we’re talking about, I guess, is power, directibility and software to control it all. With AESAs you can concentrate power and direct it in one direction. Software already controls this process, so in theory this radar could be used as a jammer. But only to the limits of its transmitting powers and in the frequency band covered by the radar. Dedicated jammers are much more powerful (usually) and designed to be able to jam over a wider frequency spectrum. To what extent that is… Read more »

I remember way back in the 70s a US attack carrier was being shadowed by Soviet
“fishing trawlers”, AKA elint ships. Some US admiral got daring, and had the carrier’s air search radar aim a single pulse of radar energy at a trawler. It knocked out all its electronic for hours.

Does peacetime mean using them to fly tourists off to the Med?

Three military jets – part of a fleet costing taxpayers an astonishing £10.5 billion – are being used to fly holidaymakers to sun-kissed resorts because the RAF has no use for them.
http://www.dailymail.co.uk/news/article-5978229/Ministry-Defence-blows-10-5billion-jets-used-Brits-abroad.html

This was always in the PFI contract. The DM is one of those papers that suppert tax cuts not caring about the impact on public services. Regards the Bombadier/Boeing debate: I would go for the larger fuselage, more room for development.

If you believe the tosh in that article you’ll believe anything. That’s how the deal was structured to save taxpayers money, actually! Now, you can be fundamentally against PFI deals as a matter of principle, fair enough. But don’t criticise the third party revenue aspect of the deal because without it the PFI would be even more expensive. Cheap gutter journalism as always from that newspaper. And love it or hate it, the fact is that at the time, without the PFI, there would have been no deal. Full stop. It was either that or nothing. Personally, I think the… Read more »

(Chris H) Nigel – I am sorry to have to correct your rather misleading statement and advise you to be careful quoting the Daily Mail. Its an entertaining read and I love Littlejohn but its comments are often well wide of the mark. The RAF tankers are used on a ‘fly by hour’ agreement (with of course a core guarantee of hours) and have not cost the UK taxpayer a penny to purchase our full fleet of 14 A330 MRTT tankers. They were bought by a private consortium called ‘Air Tanker’: http://www.airtanker.co.uk/about/who-we-are Part of the deal allows Air Tanker to… Read more »

Let’s hope the general public have such a fuller understanding when it comes to the defence budget hence the reason for posting the article in the first place.

My typo error which could not be changed was ? instead of ! 00:48 late night.

What an incredibly lazily written article. Lots of references to “tens of millions “,its obvious that they couldn’t be bothered to do any research at all.
Regular readers will be aware that the situation is far, far worse and the contract precludes the RAF from using the A400 Atlas for refuelling.

(Chris H) Grubbie – The fact we choose not to use, or need to use, the A400M for tanking does not make anything ‘far far worse’. And the reason we haven’t fitted them out for tanking was not anything to do with contracts but of keeping resources fully capable in their specific roles. Sorry to say even DJ got that bit wrong a few weeks ago. To use one of these hugely capable freighter aircraft for such a purpose would be a waste of its resources for one thing and given we have probably the biggest and most efficient air… Read more »

Not necessarily. AirTanker could sub-lease the refuelling service back to the RAF (either using a C-130J or an A400M) on a wet or damp lease basis, where AirTanker manages the provision of the service, including the tasking orders, etc., and the RAF provide a fully crewed and role equipped aircraft on the ramp, ready to go, as required. It would obviously make no sense to do this for fast jet or large aircraft refuelling, but a lot of sense if the RAF is thinking of moving into AAR for helicopters.

I personally like the look of Aussie wedgetail. This Saab offering might be decent for Elint but what about AEWACs? What is its stand off range. What is its endurance. Note 2 turbofan jet engines on bombardier global, is that enough for resilience. I would rather a 4 engine wide bodied aircraft, although not an expert in electronic warfare and radar technology. Clearly miniaturisation and technology improvements mean much more capable and powerful radar equipment in a smaller airframe. How long has Sentry got until utterly obsolete? Or is it obsolete already? Cost…defence budget already stretched, we will need a… Read more »

Apart from the differences between airframe sizes. Both aircraft use a modern AESA radar for searching and tracking. However, the Wedgetail’s radar has an ace up the sleeve compared to the Global Eye’s. An AESA radar because it uses a phased plannar array is made up of a multitude of individual Transmitter/Receiver modules and has a fixed field of view of +/- 60 degrees in both elevation and azimuth. This give a 120 degree Field Of View the radar can “comfortably” search objects in. Both aircraft have their arrays fixed in a “canoe like” arrangement above the fuselage’s centre line… Read more »